Since 1989, the North Carolina Heritage Award has honored our state’s most eminent traditional artists and practitioners. Recipients of the Heritage Awards range from internationally acclaimed musicians to folks who quietly practice their art in family and community settings. Awardees receive a cash award and are honored in a ceremony that draws large and enthusiastic audiences. Several North Carolinians have gone on to receive the National Heritage Fellowship Awards presented by the National Endowment for the Arts.

These awards deepen our awareness of North Carolina’s diverse cultural traditions, and their importance to our state’s past, present and future.

Heritage Award recipients are nominated by citizens of the state and selected through panel process.

Fiddler Arvil Freeman of Buncombe County has performed and passed on his traditions for over fifty years and is known for his smooth and melodic long-bow style. Born into a musical family in the Paw Paw community of Madison County, Arvil grew up playing local parties and dances with his brother, Gordon, and their friend Ralph Lewis, a former member of Bill Monroe’s Blue Grass Boys. Arvil learned many tunes as a boy from Tommy Hunter, a 1989 North Carolina Heritage Award recipient. 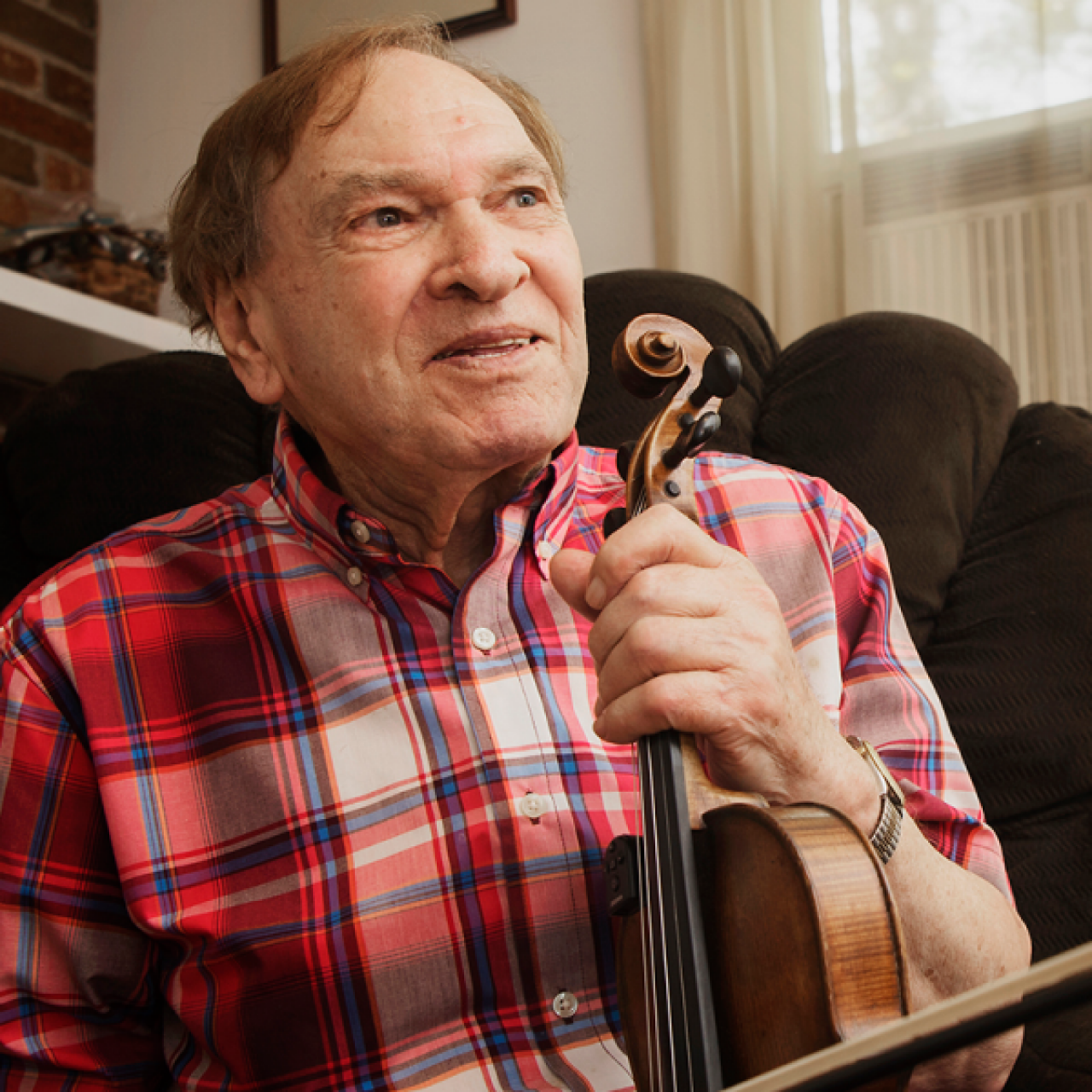 Arvil plays somewhere “in between” old-time and bluegrass, and he respects the traditions' shared repertoire. “Those tunes have always been around,” he said.

He has a reputation as the fiddler in the Asheville area, having performed for decades with the lead band at the annual Shindig on the Green, and at numerous festivals and concerts in the region.

Now Arvil devotes his time to teaching rather than performing and he instructs his students by ear, the old-time way. Pupils praise his calm and patient teaching style and demeanor. Many of them, including Josh Goforth, Emma and Bryan McDowell, and Danielle Bishop used the knowledge and skills they gained from him to become professional musicians and well-known contest winners themselves.

“If you wanted to be good, you listened to Arvil.”
—Bryan Sutton, musician 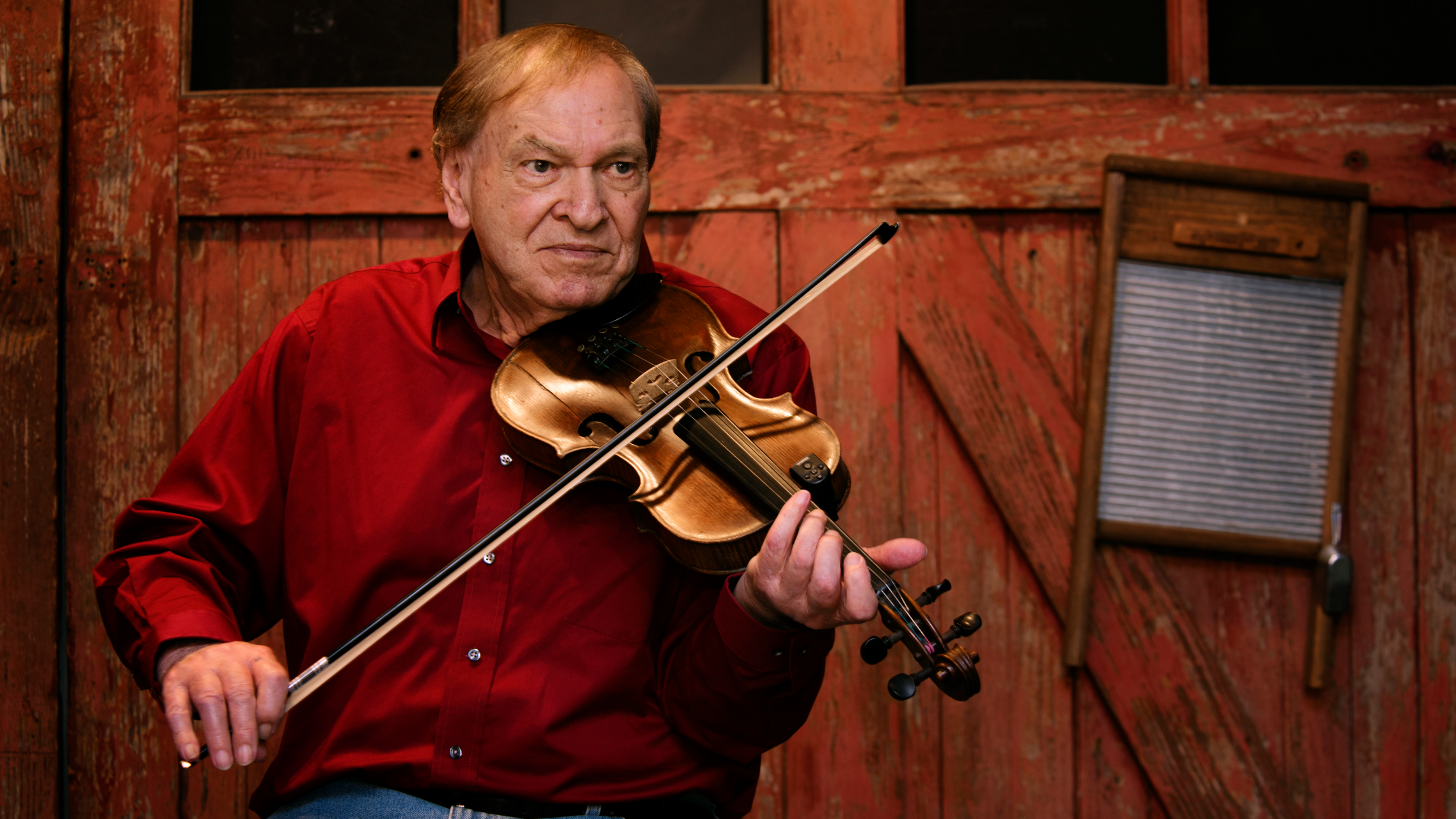 Asha Bala is a performer, scholar, and instructor of the South Indian classical dance tradition Bharatanatyam. She has shared her passion for dance and culture with students throughout the Triangle and Fayetteville areas since 2002. 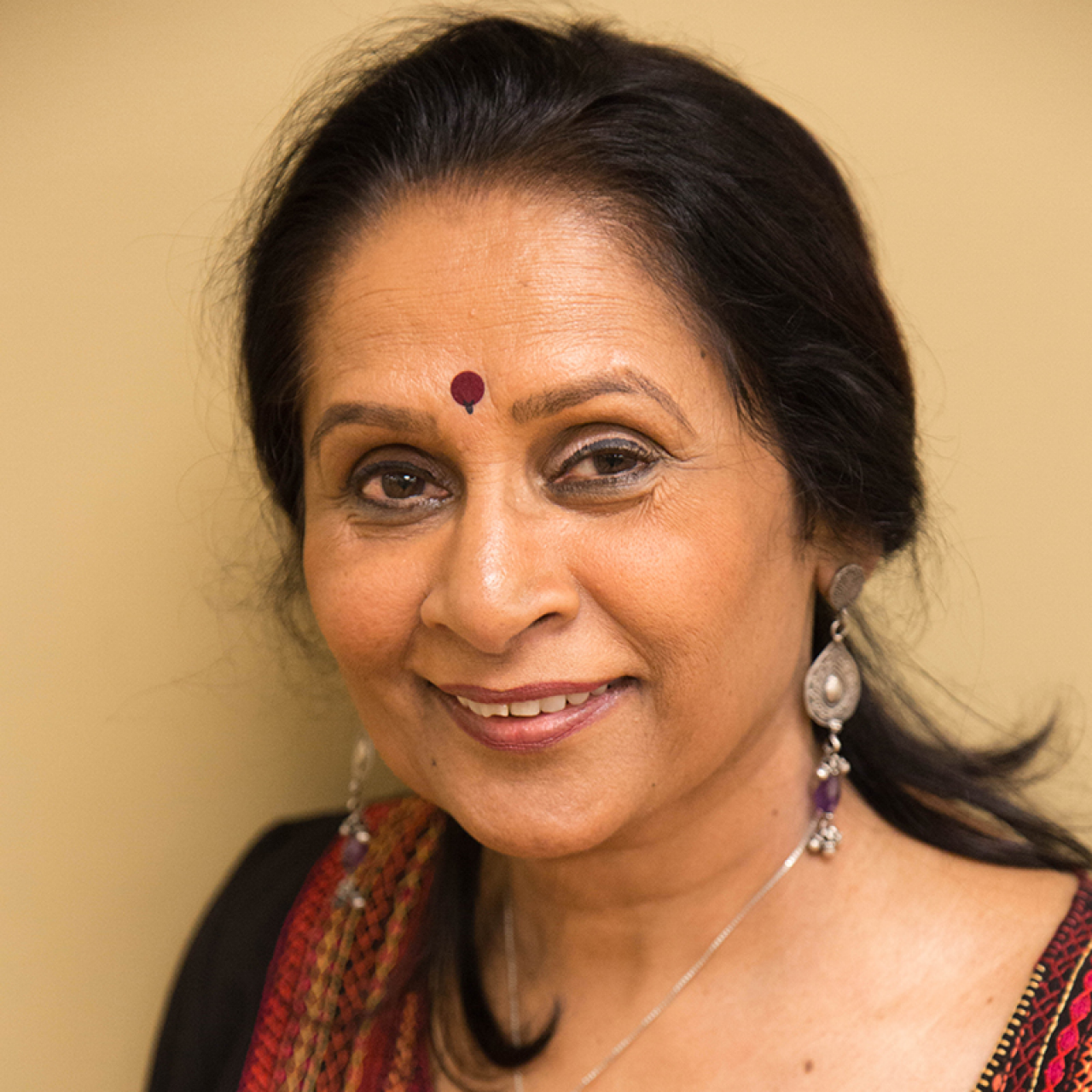 Asha received worldwide recognition for her performances at prestigious venues such as the Bolshoi Theatre in Moscow, the Smithsonian in Washington D.C., the Music Academy in Chennai, and the National Centre for the Performing Arts in Mumbai. Bharatanatyam is an ancient spiritual practice in South India based on the text Natya Sastra. After many years of intense training, students participate in a solo performance that signifies the shift from student to performer. Asha has successfully guided dozens of young women through this ardurous process.

She trained extensively in Mumbai, India, receiving an MFA in classical dance, and she also studied at American University in Washington, D.C., receiving a master of fine arts in modern dance. She draws on both modern dance training and Sanskrit oral tradition to teach the complex poses, rhythms, and hand gestures of Bharatanatyam.

She has taught Bharatanatyam to Indian diaspora communities in North Carolina and in modern dance programs at Fayetteville’s E.E. Smith High School and Fayetteville State University, and maintains private studios in Fayetteville and Cary. 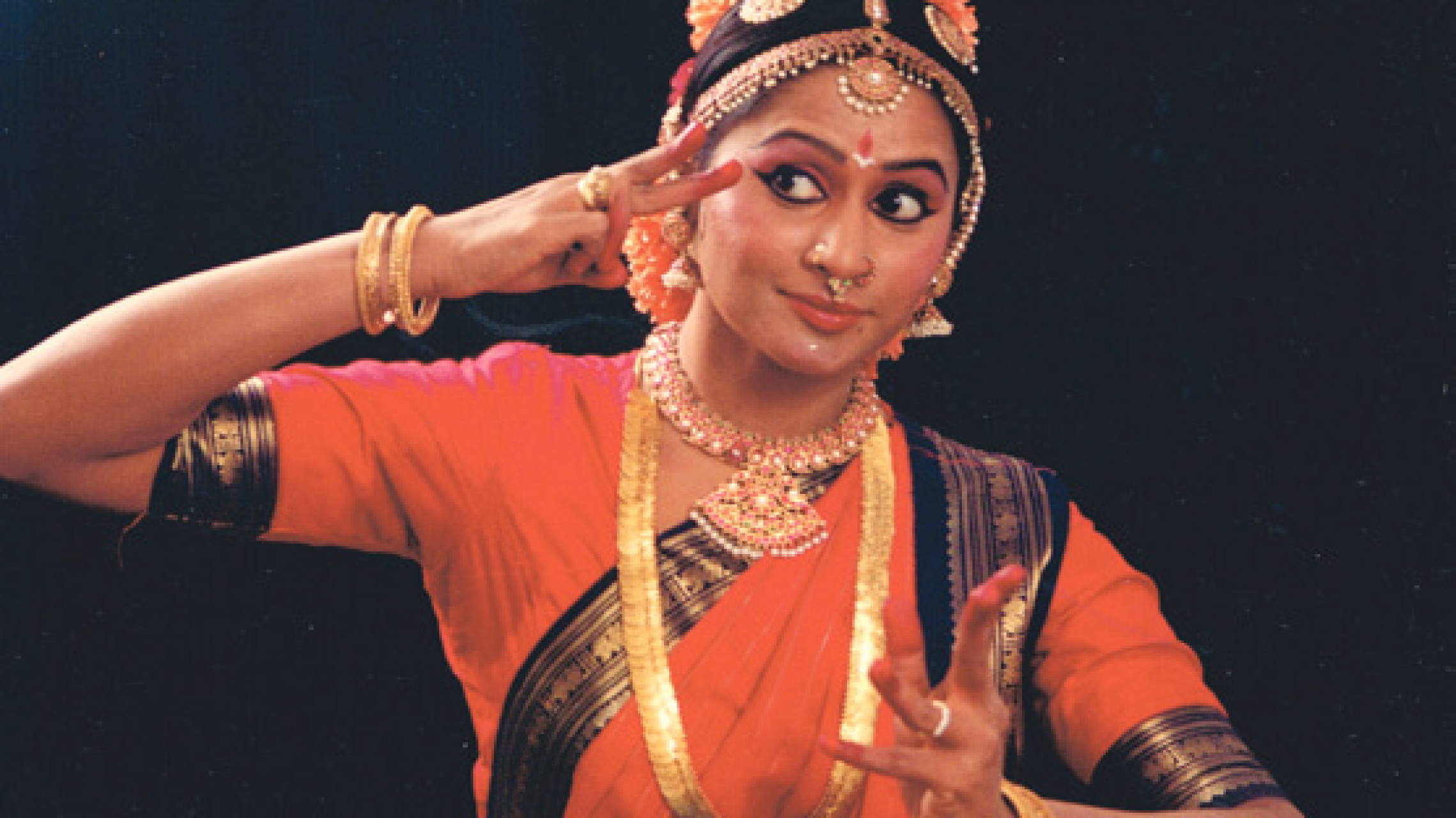 Lula and Glenn Bolick of Caldwell County have brought multiple mountain and piedmont traditions into the 21st century. As potters, they continue the practice of Lula’s family, the Owens of Seagrove. Glenn sustains his family’s traditions as a saw-miller, musician, and storyteller, all showcased at the family’s annual Heritage Day celebration. 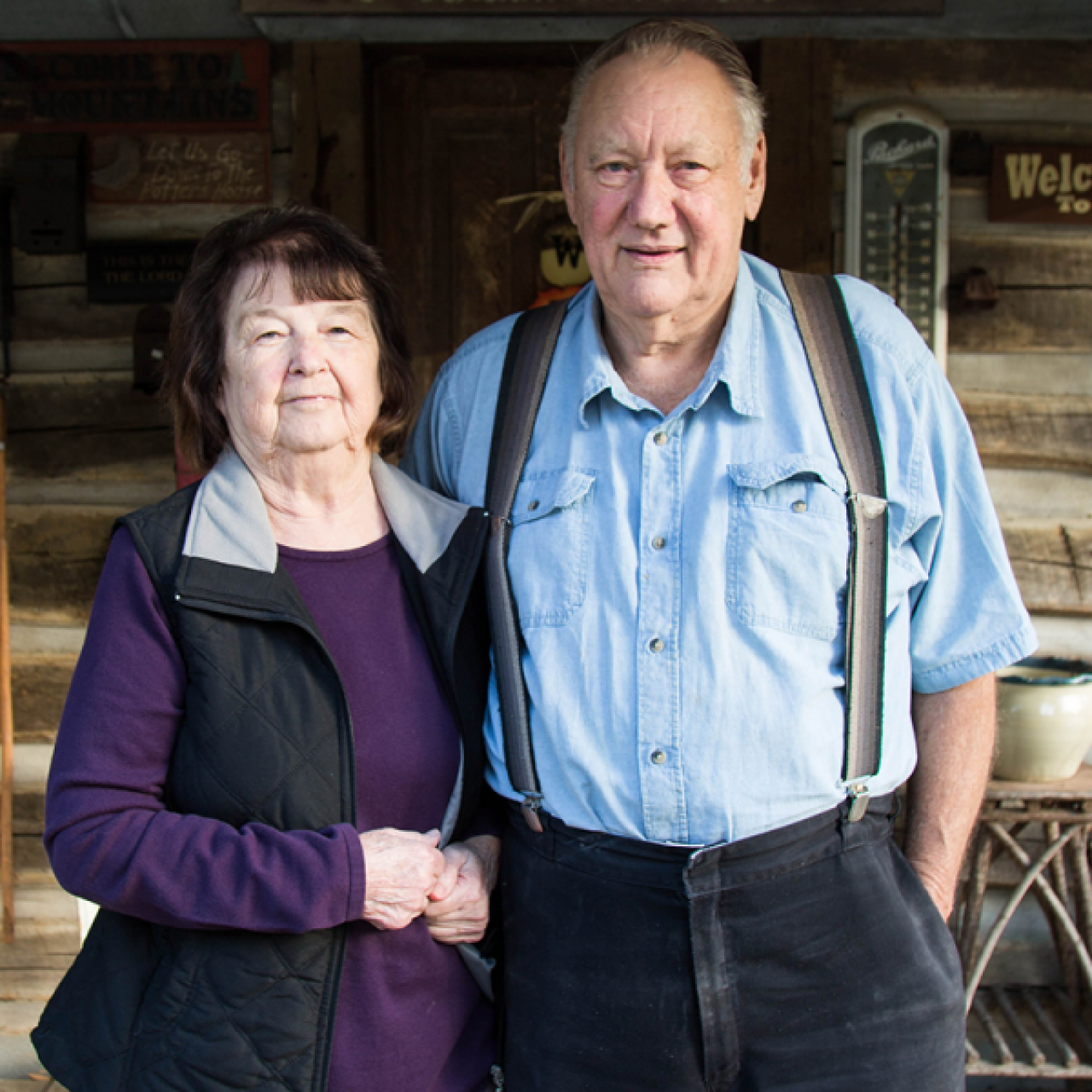 Glenn still runs his saw mill but pottery is the family’s main occupation. He grew up in the Bailey’s Camp community near the Caldwell and Watauga county line. A talented musician he plays a variety of instruments, and enjoys sharing the tunes he learned growing up in the mountains.

Lula is a fifth-generation potter. Her great-grandfather founded Owens Pottery in the late 1800s in Seagrove. Lula met Glenn at a drive-in diner in Asheboro while he was working in the Piedmont, and they married soon afterwards.

They both made pottery at the shop of Lula’s dad, M.L. Owens. Eventually they moved and purchased the old farm where Glenn was raised and opened Bolick Family Pottery in 1973. Their daughter, Janet Calhoun, a 6th generation Owens potter, owns Traditions Pottery in Blowing Rock with her husband, Michael. She also plays in the Bolick family band.

Glenn's efforts to preserve the occupational traditions of mountain communities have led to numerous invitations for speaking engagements and consultancies across the region. 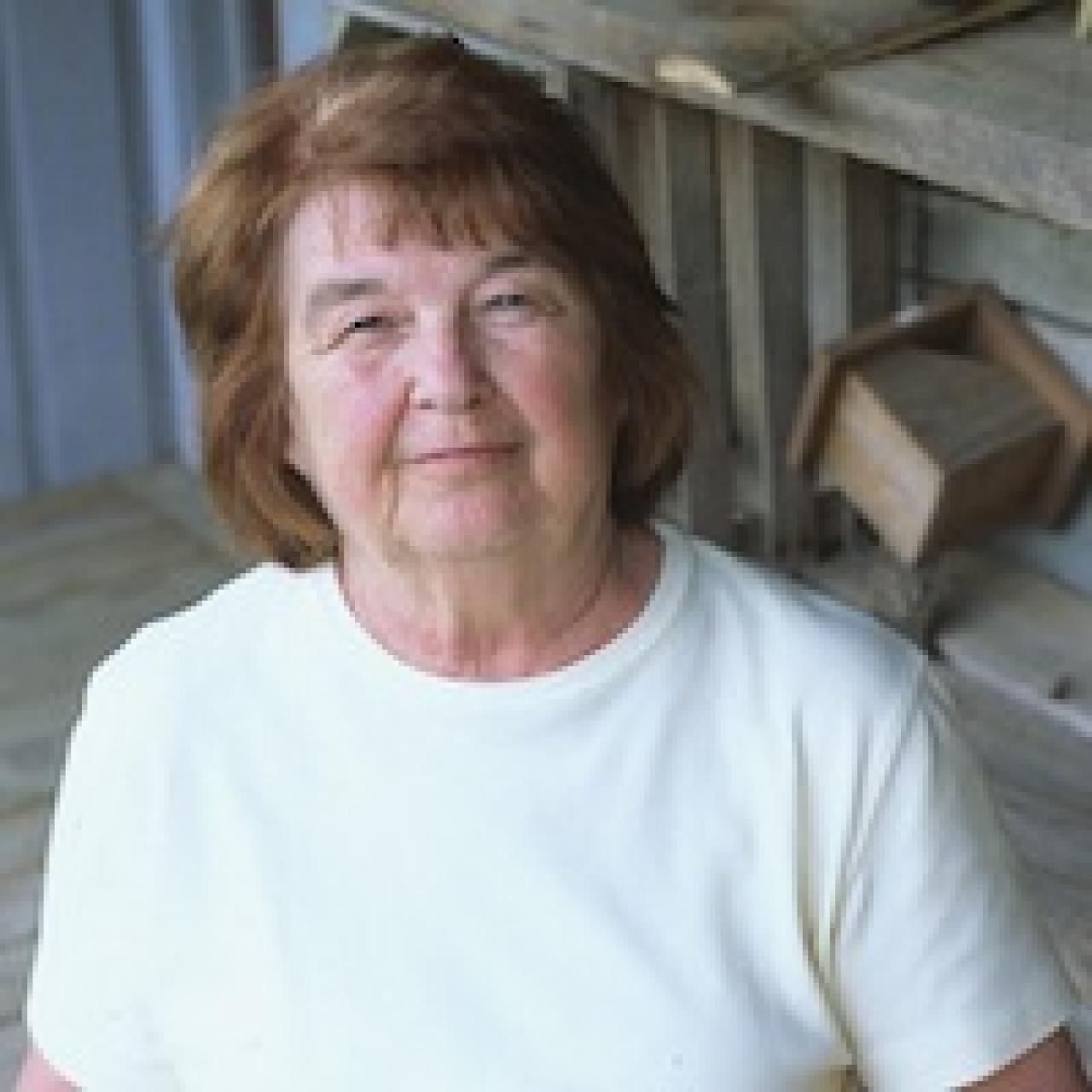 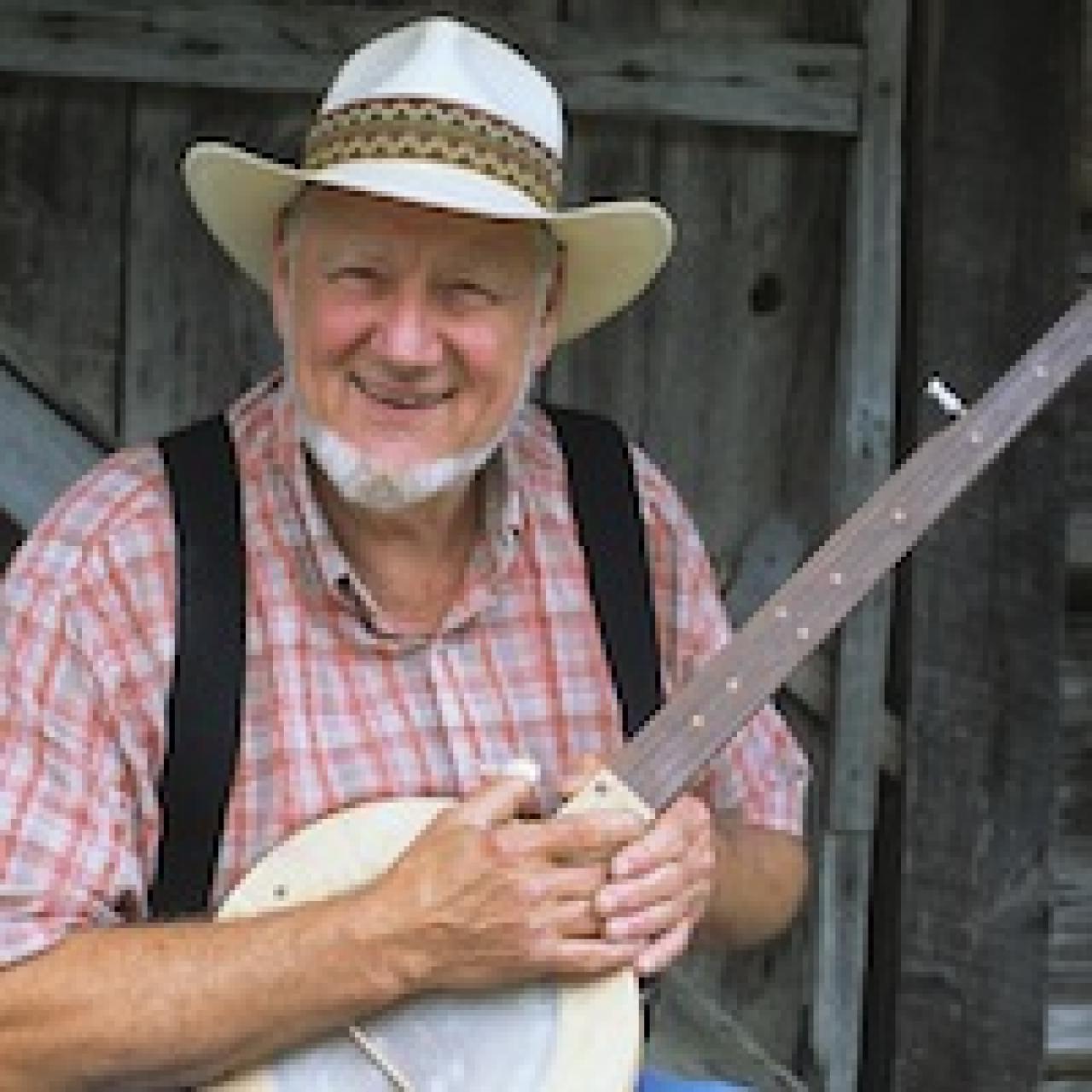 Lenoir County’s Dick Knight is a professional multi-instrumental jazz, R&B, funk, and soul musician, who played with James Brown, Otis Redding, Dionne Warwick, and Gladys Knight. He taught and influenced countless students through his work as a band director and music instructor in Florida and in Kinston, N.C. 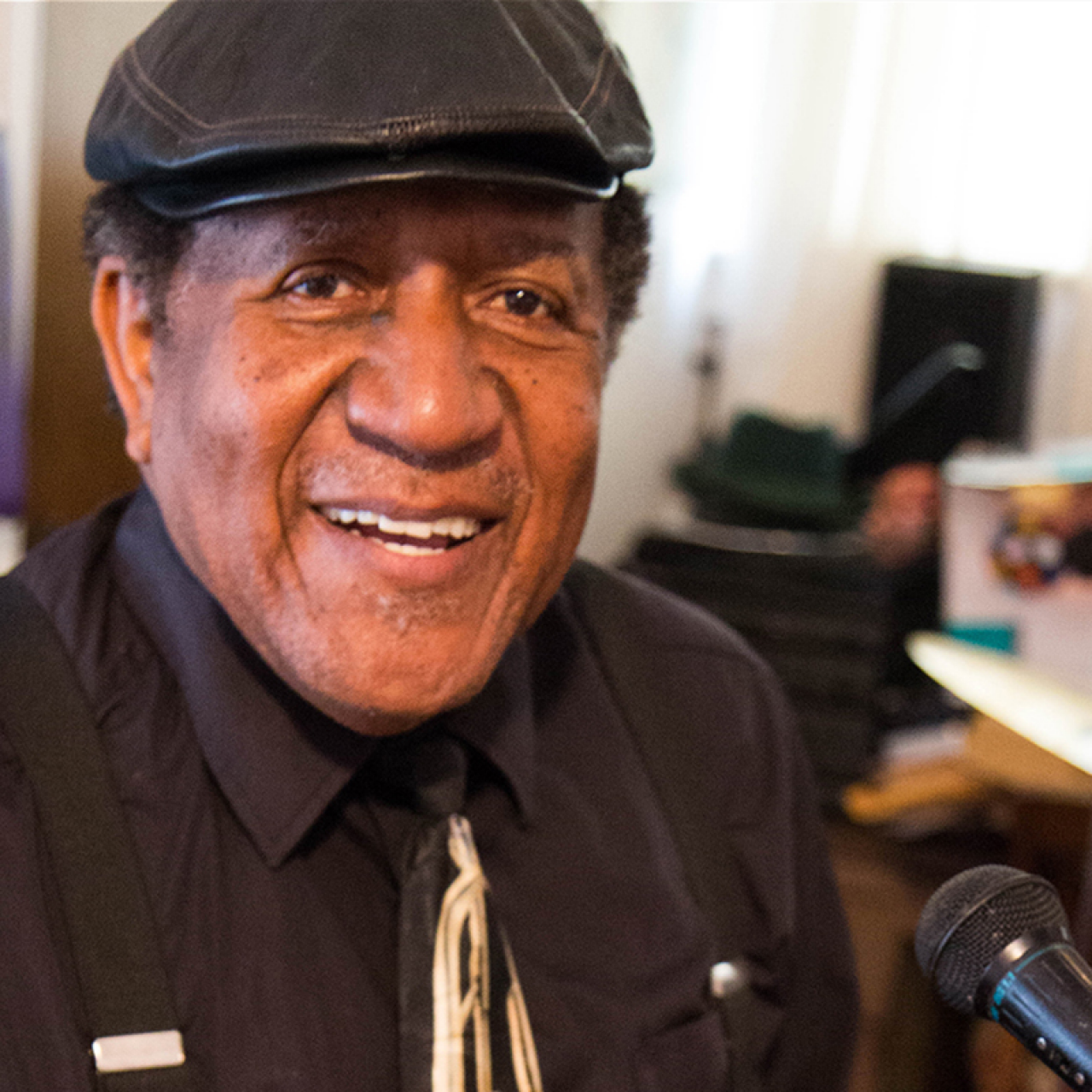 Born and raised in Georgia, Dick attended Florida A&M University, where he majored in music and played in the university’s famed marching band. He became the band director at Savannah High School in Kinston after graduating college at the age of 19. His first Kinston acquaintance was Nat Jones, James Brown’s musical director, who quickly recruited him for the band. Stints with other popular recording artists soon followed.

After retiring from teaching in 2007, he rededicated himself to performing. He enjoys Kinston and the freedom that retirement allows. He still practices every day and you can find him playing with the Monitors (led by 2014 Heritage Award recipient Bill Myers), his own Dick Knight Express, and he solos as Dick Knight The Captain. He frequently plays cruise ships and waterfront businesses, totaling over a hundred venues a year. Dick Knight is one of the many musicians featured in the African American Music Trails of Eastern North Carolina and Kinston’s African American Music Park.

“Being a student of Dick Knight gave me the tools and skills I needed to perfect my skills… Practice makes you better not perfect. Those were the words of my leader, my friend, and my teacher."
—Lafayette Jones, former student 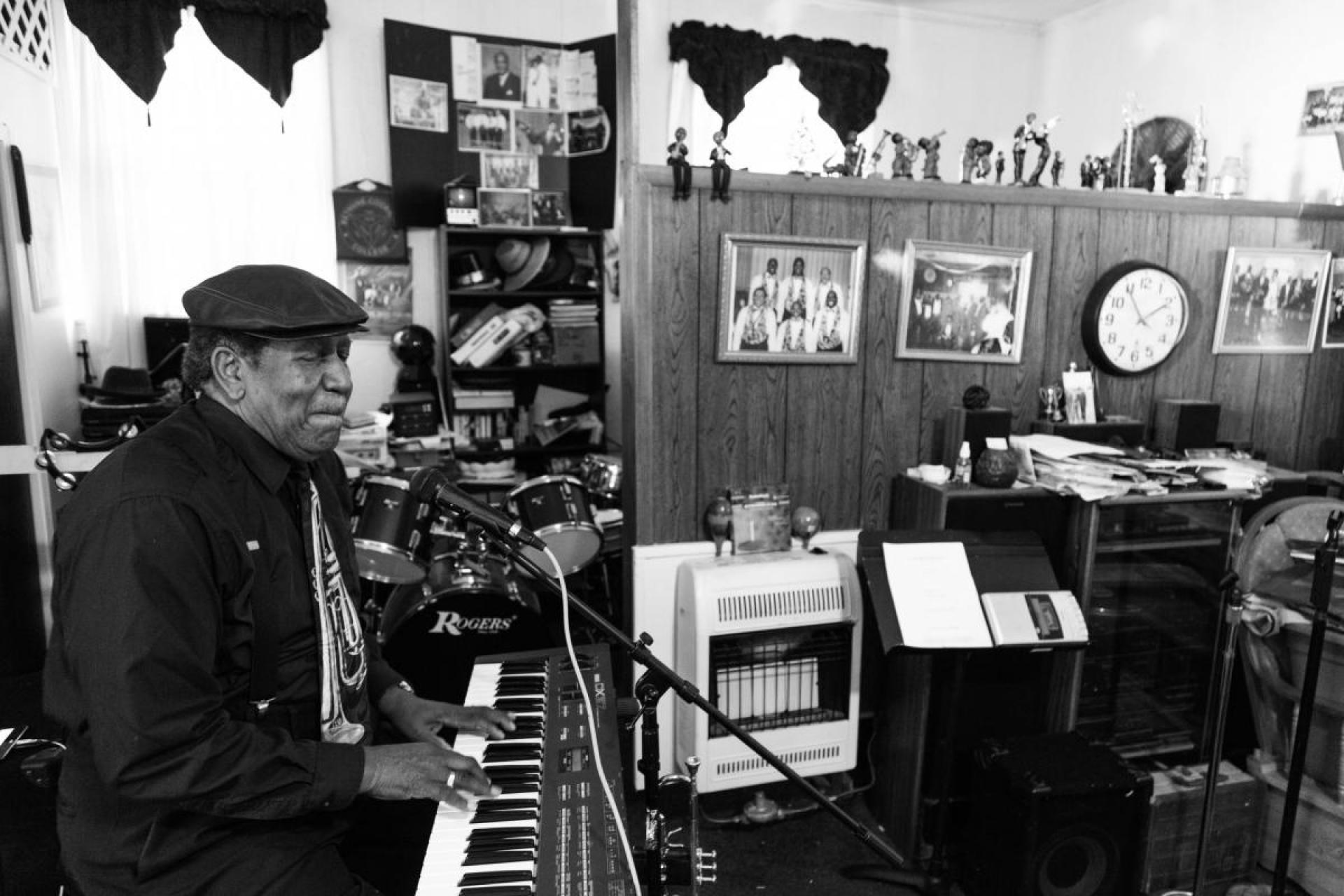 Tony Williamson is a renowned mandolin player from Chatham County, who started playing at age nine, and by 15 he won the first-place “world champion” title for mandolin at the Union Grove Fiddlers Convention. Now an internationally-recognized expert on the mandolin, Tony has always served as a mentor and an instructor to other players. 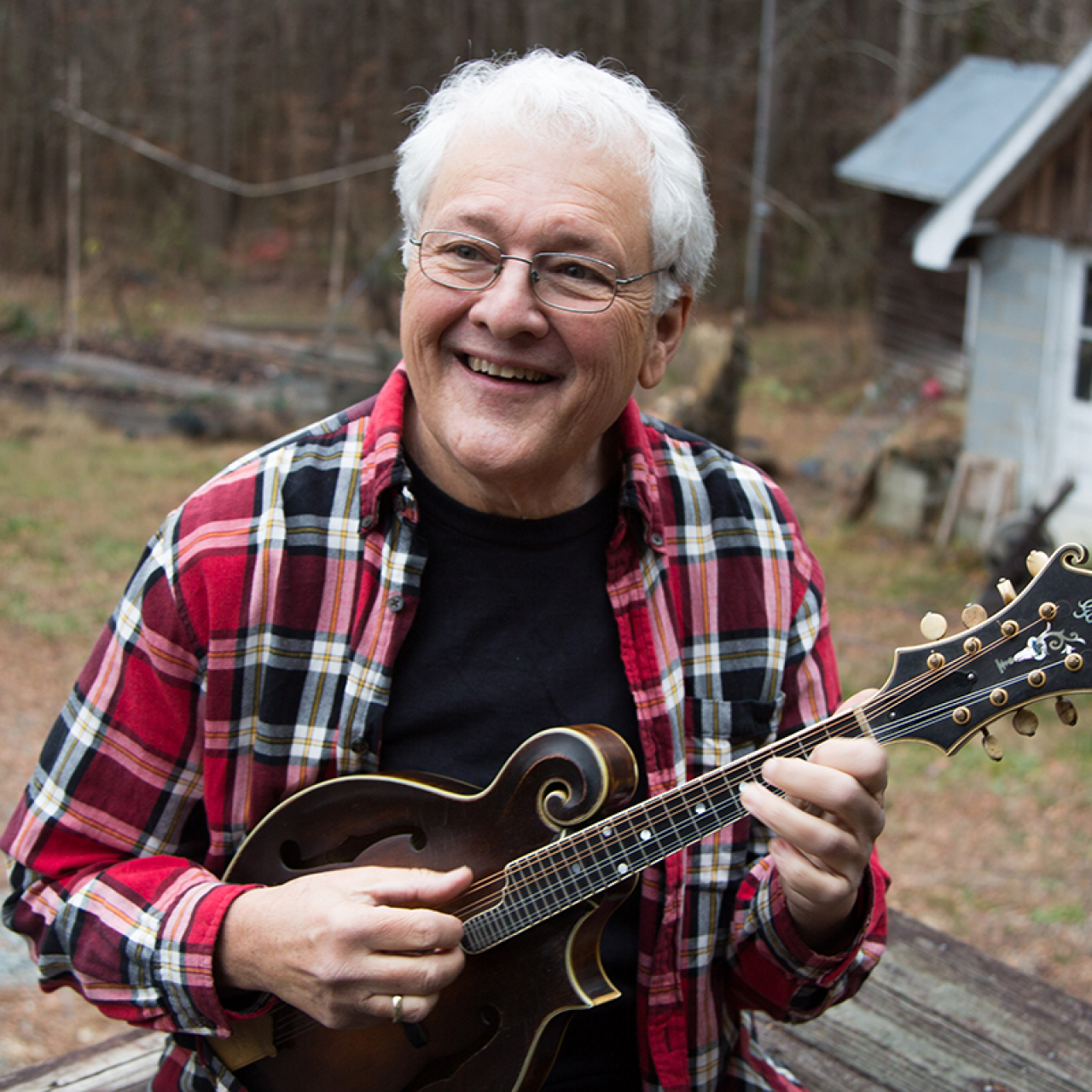 Now an internationally-recognized expert on the mandolin, Tony has always served as a mentor and an instructor to other players. He’s also a skilled songwriter whose compositions integrate everything from traditional Piedmont string band tunes to classical music and jazz.

He writes and plays innovative bluegrass music while maintaining his traditional roots. Tony’s father and grandfather, both millworkers, played banjo in their leisure time. Since his older relatives already played guitar, fiddle, and banjo, a young Tony decided to pick up the mandolin.

He was a sought-after session musician and sideman for artists like Sam Bush, David Grisman, Jerry Douglas, and Ricky Skaggs. Not only has he collaborated with other mandolin legends, he has become a mentor to a younger generation of pickers like Sierra Hull, Chris Thile and Andrew Marlin of Chapel Hill-based Mandolin Orange.

During a brief hiatus from playing, he opened Mandolin Central, his own instrument shop in Siler City, and it became a hub for local musicians, a treasured source of vintage instruments, and a place for players and luthiers to learn.

“Through all the acclaim, Tony Williamson remains humbly dedicated to spreading a spirit of what he calls “communion” through his music, to bringing young artists into this circle through his teaching and mentoring.”
—Glenn Hinson, UNC-Chapel Hill