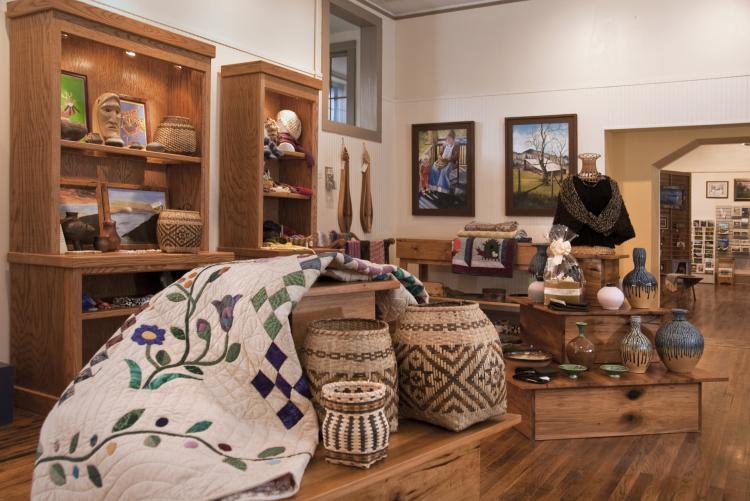 Asheville, N.C. (April 11, 2017) The Blue Ridge National Heritage Area, in collaboration with the North Carolina Arts Council, has launched a new crafts trail to boost the region’s craft industry across Western North Carolina, thanks to a $90,000 grant from the Appalachian Regional Commission.

“Today we are pleased to launch the Blue Ridge Craft Trails of Western North Carolina, a digital project that will help more visitors discover the rich heritage of crafts  and connect with artisans in our mountain communities,” said Angie Chandler, executive director of the Blue Ridge National Heritage Area.

Appalachian Regional Commission officials see the Blue Ridge Craft Trails as a pathway to new economic opportunities across a region hard-hit by job losses in traditional manufacturing over the past decades.

“Helping Appalachia leverage its cultural and natural assets into economic opportunity is one of ARC’s key investment strategies for the Region.” said ARC Federal Co Chair Earl Gohl.  “The Crafts Trail is an example of how this strategy is being put to work to create jobs and generate revenue across Western North Carolina.”

The ARC grant is matched with funds from the North Carolina Arts Council and the Community Foundation of Western North Carolina, and other private gifts.

Handmade in America, first managed by Becky Anderson, created the original Craft Heritage Trails of Western North Carolina in the 1990s, connecting visitors to hundreds of craft studios, galleries, schools, historic places and inns across the mountains. The 3rd edition of the Craft Heritage Trail book featuring nearly 500 different sites was published in 2003.

The BRHNA’s Blue Ridge Craft Trails of Western North Carolina will update those listings for the digital age, offering online visitors a portal for desktop and mobile applications.  As phases of the project are completed, technology will allow collectors to connect with craft artisans to purchase their wares and visit their studios and to locate the many craft galleries and festivals found in Western North Carolina.

The current project is considered the planning phase and will include at least six listening sessions across the region to gather ideas and comments from artists and communities. Project partners offering in-kind meeting space and support for these sessions are the Southern Highland Craft Guild in Asheville, Penland School of Crafts and Toe River Arts Council near Spruce Pine, Qualla Arts and Crafts Mutual in Cherokee, Blowing Rock Arts and History Museum, Tryon Arts and Crafts, and John C. Campbell Folk School in Brasstown.

In addition to the listening sessions, the grant also includes funds for market research, site documentation and the development of a web portal for an initial 75 sites across the 25 county regions and a brochure.  Subsequent sites will be added in future phases.

Crafts have created paychecks for mountain families over the past century. In the early 20th century, landmark institutions sprang up to preserve handicrafts passed down through generations.

“The Appalachian mountains of Western North Carolina are the center of a thriving craft artisan community that goes back to the Eastern Band of the Cherokee Indian,” stated Wayne Marin, director of the North Carolina Arts Council. “Clearly, any documentation that celebrates this rich history and creates awareness about traditional and contemporary craft-making will result in economic improvements, including jobs and tourism in Western N.C.”

Professional craft artisans across the region generate $206 million annually in sales and paychecks, according to a 2008 economic impact study on the craft industry in Western North Carolina.  The unique craft artworks mastered in the mountains contribute to local economies with increased tourism, the study showed. Tourists in search of handmade crafts and authentic mountain heritage spend an average of $643 a day and typically stay longer than other visitors.

Heritage tourism in the Blue Ridge National Heritage Area contributes $2.39 billion annually to the regional economy, supporting more than 30,000 jobs and generating $176.5 million annually in state and local tax revenue, according to a 2014 economic impact study.

“The N.C. Arts Council has a long-standing collaboration with the Blue Ridge National Heritage Area that improves quality of life and local economies through promoting unique cultural assets like music and craft,” Martin added. “We are delighted to continue our partnership with through the development of the Blue Ridge Craft Trails.”

“Now the Blue Ridge Craft Trails of Western North Carolina will help guide visitors to discover mountain craft artists firsthand. We’re on an exciting path that promises economic growth for our mountain communities in the years to come,” Chandler said.

About the North Carolina Arts Council:
The North Carolina Arts Council launched its work in 1967 as part of a national movement inspired by the concept of “arts for all citizens.” For the last 50 years, the Arts Council has used the arts to leverage job creation, revitalize downtowns, arts-based tourism and help students achieve success both within and outside of the classroom. With almost 3,000 nonprofit arts organizations, including a network of local arts councils that reaches into all 100 counties of our state, the nonprofit arts industry generates $1.24 billion in direct economic activity for North Carolina. www.NCArts.org.
About the Blue Ridge National Heritage Area:
Since its enactment by Congress in 2003, the Blue Ridge National Heritage Area Partnership has awarded 154 grants totaling over $2.1 million and leveraging another $4.5 million in matching contributions from local governments and the private sector. These grants have funded projects in all 25 counties of Western North Carolina. The BRNHA Partnership is the nonprofit organization charged with preserving, interpreting, developing, and celebrating the rich and unique natural and cultural heritage in the 25-county Blue Ridge National Heritage Area.
About the Appalachian Regional Commission:
The Appalachian Regional Commission (www.arc.gov) is an economic development agency of the federal government and 13 state governments focusing on 420 counties across the Appalachian Region. ARC's mission is to innovate, partner, and invest to build community capacity and strengthen economic growth in Appalachia to help the Region achieve socioeconomic parity with the nation. The views and conclusions contained in this news release are those of the authors and should not be interpreted as representing the opinions or policies of the U.S. Government. Mention of trade names or commercial products does not constitute their endorsement by the U.S. Government.