The North Carolina Arts Council is celebrating its 50th anniversary this year. When we started our work in 1967 there were approximately 250 arts nonprofits operating in the state, including 17 local arts councils.

One of the early decisions that our agency made was to set a goal to create the most extensive network of local arts councils and non-profit arts organizations in the country and to include all of our 100 counties. We have had success; there are now nearly 2,500 arts and culture non-profits in North Carolina, including 75 local arts councils.

Today, the NC Arts Council infrastructure reaches into every county. Last year, almost 6 million citizens participated in the arts activities and projects, directly supported by our agency, implemented through this network. These projects had many benefits, including enhancing the lives of individuals, transforming our communities and strengthening the reputation of our state as a cultural destination. This network of arts and culture organizations contributes to the economic well-being of every region in North Carolina.

The varied demographics and geography of the state are reflected in the unique strengths of each region. In addition to reports for the 32 counties served by local partner studies, regional reports also include the 68 counties that were not studied directly. Many of the local arts councils in these counties assisted with the data collection for the regional studies, collecting nearly 2,000 audience surveys and 400 organization surveys beyond the local study partner participants.

These regional reports show the breadth of spending on arts and culture throughout the state, and the return on investment through revenues generated to government. There are strong non-profit arts and culture organizations in every part of North Carolina. In addition, local economic impact reports are available for the counties italicized in the list below. 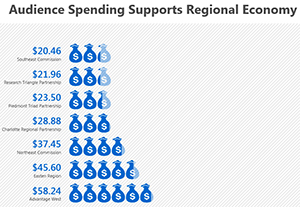 The AEP5 analysis documents the draw of arts and culture activities that attract audiences to every region. In more rural regions, arts and culture event attendees spend more beyond the cost of admission because they generally spend at least one night away from home and eat more restaurant meals. While densely populated regions with larger cities support more organizations which spend more, there are more local residents in these counties, so their per person audience spending is less. The presence of arts and culture organizations in communities both large and small provides a vibrant quality of life that generates economic vitality.