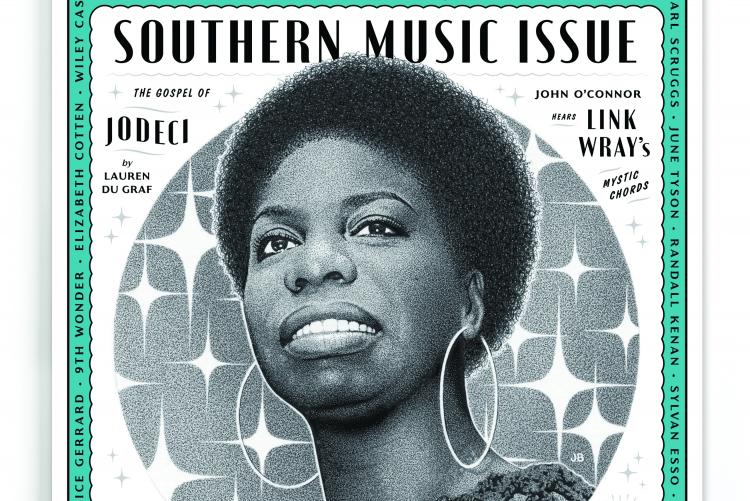 Simone, born and raised in Tryon, N.C., is celebrated as an icon of American music in a feature essay about artistic influence and identity written by poet Tiana Clark.

“The roots of so many genres of American music started right here in North Carolina,” said Susi H. Hamilton, secretary of the North Carolina Department of Natural and Cultural Resources. “We are delighted that the Oxford American will bring these stories to life to celebrate our musical heritage.”

The issue also includes a 24-song CD sampler of recordings from North Carolinians from 1924 to 2018, plus accompanying digital download with four bonus tracks) highlighting music from N.C. legends such as Simone, Thelonious Monk and John Coltrane, Earl Scruggs and Doc Watson, James Taylor and Elizabeth Cotten. This CD includes a new recording of Ella May Wiggins’s 1929 protest song “Mill Mother’s Lament” by Shannon Whitworth made exclusively for the Oxford American at the iconic Asheville studio Echo Mountain in September. Detailed liner notes and essays on the songs were written by Rhiannon Giddens, Wiley Cash, Ron Rash, Michael Parker, David Joy, David Menconi, and Randall Kenan, among others.

The North Carolina issue was a catalyst for a proclamation by Governor Roy Cooper of 2019 as the Year of Music to recognize North Carolina’s influence on America’s most important musical genres and to celebrate, support and sustain the state’s strong music heritage. The year-long celebration features:

At the time the BBC declared: “Nina Simone was one of the last divas of jazz and was considered one of the finest songwriters and musicians of her day.”

The purchase caught the interest of the National Trust, which had recently started a $25 million campaign to preserve historical sites related to African-American history. The state’s African American Heritage Commission is working with state and national partners to create awareness about the home through various fundraising efforts.

Much of Simone’s best-remembered songs. Including “To Be Young, Gifted and Black” and “Blackash Blues” were civil rights anthems on topics ranging from the condemnation of Jim Crow laws to addressing the assassination of Medgar Evers and the 16th Street Baptist Church bombing in Alabama.

In 2010, Rolling Stone named Simone to its list of the 100 greatest singers of all time, clocking in a No. 29 ahead of Neil Young, Elton John and Bruce Springsteen.