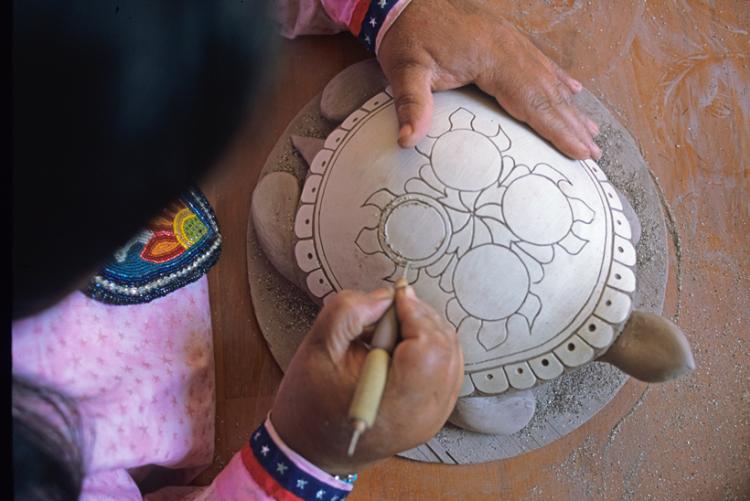 Senora Lynch will demonstrate at the NC Folklife Festival

“North Carolina is a state where our traditional arts continue to reflect a unique sense of place and our unique folkways through craft, music, storytelling and more,” Wayne Martin, executive director of the North Carolina Arts Council said.  “The North Carolina Folk Festival is a wonderful backdrop to discover the cultural treasures found in communities small and large across North Carolina.”

“Our incredible potters will engage in live demonstrations, narrative discussions, and sell examples of their work in the heart of the festival site at Center City Park,” says Grossman.

Among the artists will be North Carolina Heritage Award recipients, and other outstanding representatives of the ceramic traditions of Seagrove, the Catawba Valley, and American Indian communities.

The North Carolina artists include:

Bobby Hicks and Mark Kuykendall-- bluegrass veterans who have a combined 110 years of professional experience between them -- are known for fiddle and banjo innovation. They will perform with Asheville Bluegrass, adding mandolin, bass, vocals, and a second banjo to their performance. Hicks has won 10 Grammy Awards and is a 2014 recipient of the North Carolina Heritage Award.

At 79 years old, Connie Steadman has been singing spirituals and gospel songs for fully three-quarters of a century, having been pulled into her family's a cappella quartet when she was only five years old. She is the recipient pf the prestigious North Carolina Heritage Award, presented every other year by the North Carolina Arts Council.

Arnold Richardson is a master carver of stone, wood, and gourds; an expert bead artist and potter, leather worker; and self-taught flutist and Native American flute maker. Richardson’s efforts to revitalize the cultural heritage of eastern North Carolina’s American Indians have long been credited for the resurgence of artistic vitality among the eastern tribes. He is also a North Carolina Heritage Award recipient.

Doug Rorrer and his son Taylor Rorrer, along with guitarist Scott Manring form The Rorrer Boys.  Doug and Taylor were inspired and taught by Doug’s great-uncles Charlie Poole and Posey Rorer and carry forward their family’s musical tradition through teaching and performance.

Darrin Bark draws from his family's rich artistic heritage and from the history of Cherokee ceramics in creating his distinctive gleaming black pottery.

Through his accomplished pottery, basket weaving, and teaching, Gabe Crow is helping to ensure that artists of his generation and younger will carry on Cherokee craft traditions.

A member of one of North Carolina's oldest pottery communities, MD Flowers is the only woman actively representing the Catawba Valley's wood-fired ceramic tradition.

A legend in the state's world-renowned Seagrove pottery community, Sid Luck is a sixth-generation potter and has been recognized with the North Carolina Heritage Award.

Hal and Eleanor Pugh of New Salem Pottery dedicate themselves to preserving Quaker, Moravian, and other early pottery traditions of North Carolina, as well as to their original lines of redware and stoneware.

About ArtsGreensboro: As it has been for more than 50 years, ArtsGreensboro is an arts council and catalyst for connecting the community and building recognition and support for the arts. Through its annual community-wide Campaign for the Arts, it supports more than 50 arts organizations, projects, artists, and schools annually. In addition, ArtsGreensboro hosts events and manages facilities – from the North Carolina Folk Festival and Sternberger Artists Center (Summit Avenue) to the collaborative 17DAYS Arts Festival, and the innovative Van Dyke Performance Space. Through all these activities, ArtsGreensboro drives the health and vitality of our community by supporting arts education, celebrating the diversity of Greensboro, and driving economic impact through excellence in arts programming. artsgreensboro.org