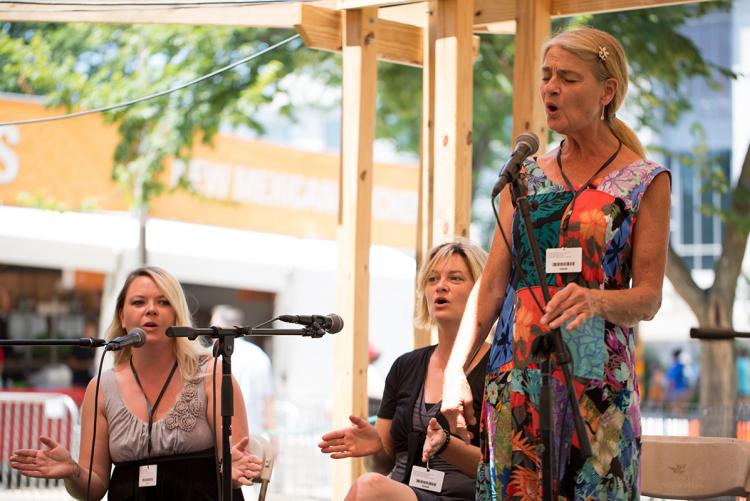 The North Carolina Arts Council announced today that three pairs of traditional artists from western North Carolina have received the second annual N.C. Appalachian Folklife Apprenticeship grants.
Ballad singer and banjo player Sheila Kay Adams will mentor her daughter, Melanie Rice Penland, in the ballads, stories, and clawhammer banjo picking style she learned from her family in the Sodom Laurel community of Madison County. Adams is known for her commitment to teaching and performing traditional Appalachian balladry, for which she has received a 2013 National Heritage Fellowship from the National Endowment for the Arts and a 2016 North Carolina Heritage Award. Penland describes this grant as an opportunity to “take [her] place among [her] ancestors as a purveyor of the ballad singing tradition.”
Brandy Clements and David Klingler, of Asheville’s Silver River Center for Chair Caning, will mentor Chisholm Leonard, Jr., in a variety of chair caning and seating techniques. Leonard came to chair caning as an extension of his long career as a woodworker, including building and repairing chair frames. Clements and Klingler recognize that sharing their knowledge of the history and methods of chair caning is crucial to “get chair caning off the endangered list.”
Fiddler Paul Brown will mentor Trevor McKenzie in the fiddle styles of northwestern North Carolina and neighboring Virginia counties. Brown learned from such prominent old-time North Carolina fiddlers as Robert Sykes and Benton Flippen, in Surry County. McKenzie intends to incorporate what he learns from Brown’s mentorship in his own work as a teacher with the Junior Appalachian Musicians program.

Visit NCArts.org for additional information about the Folklife Program.

About the North Carolina Arts Council

The North Carolina Arts Council builds on our state’s longstanding love of the arts, leading the way to a more vibrant future. The Arts Council is an economic catalyst, fueling a thriving nonprofit creative sector that generates $2.12 billion in annual direct economic activity. The Arts Council also sustains diverse arts expression and traditions while investing in innovative approaches to art-making. The North Carolina Arts Council has proven to be a champion for youth by cultivating tomorrow’s creative citizens through arts education. www.NCArts.org