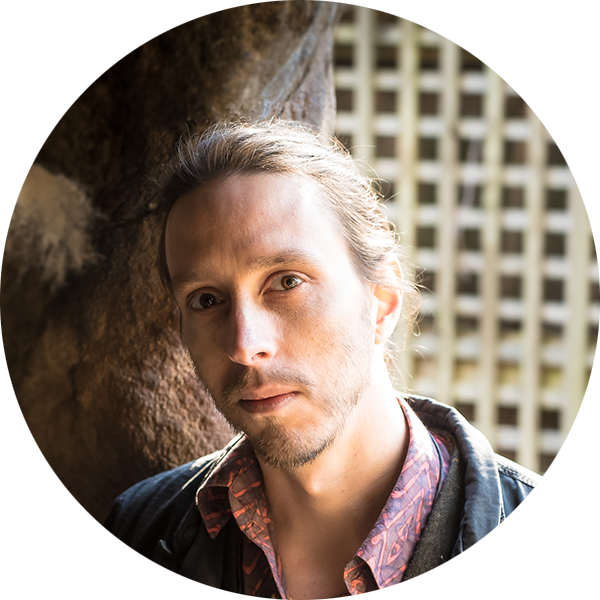 John Westmoreland has developed his own style and sound through the study of a broad range of musical genres from across the world. He grew up playing blues, rock, and folk music and went on to study jazz and classical composition at Berklee College of Music. Over the past decade, he has traveled to Senegal, Peru, Colombia, Finland, and Ukraine to learn from each of their cultures, strongly influencing his guitar playing and songwriting.
In April 2019 Westmoreland released a debut album of original songs, Cast Fire, which interweaves elements from diverse musical traditions, including American songwriters such as Bob Dylan, Leonard Cohen, and Tom Waits. His next project highlights the unpublished poetry of T-Bone Slim, a Finnish-American songwriter, poet, and Industrial Workers of the World labor columnist once known as “the laureate of the logging camps,” who has remained largely unstudied.
Westmoreland’s greatest discovery in this project was personal. “While doing research into my ancestry, I stumbled upon the fact that ‘Uncle Matt,’ as he’s been known in my family, was the iconic hobo, T-Bone Slim,” he says. “My mother had even been holding onto dozens of his original unpublished writings. My project will be to compose and record music accompanying T-Bone’s songs and poems.”
Westmoreland was a 2014 recipient of an Ella Fountain Pratt Emerging Artist Grant from the Durham Arts Council. He has played on recordings for artists Diali Cissokho and Kaira Ba, Jim Roberts, and Mike Flowers, and performed lead vocals and guitar on his own album Cast Fire. He also wrote and recorded original music for the score of the award-winning 2017 documentary, Staring Down Fate, produced by WildSides, a nonprofit that explores human/animal interactions with the goal of greater awareness and understanding.
https://www.johnwestmorelandmusic.com/