Visual/Sound/Walls is an interactive music video concert featuring G Yamazawa, Shirlette Ammons and the visual stylings of Kid Ethnic. An interactive evening of live performers with a selection of N.C.’s best music videos projecting onto all available surfaces. An ear-filling, eye-popping night of multi-sensory stimulations for humans from planet earth.

Find more information, including tickets, at the Cucalorus website. 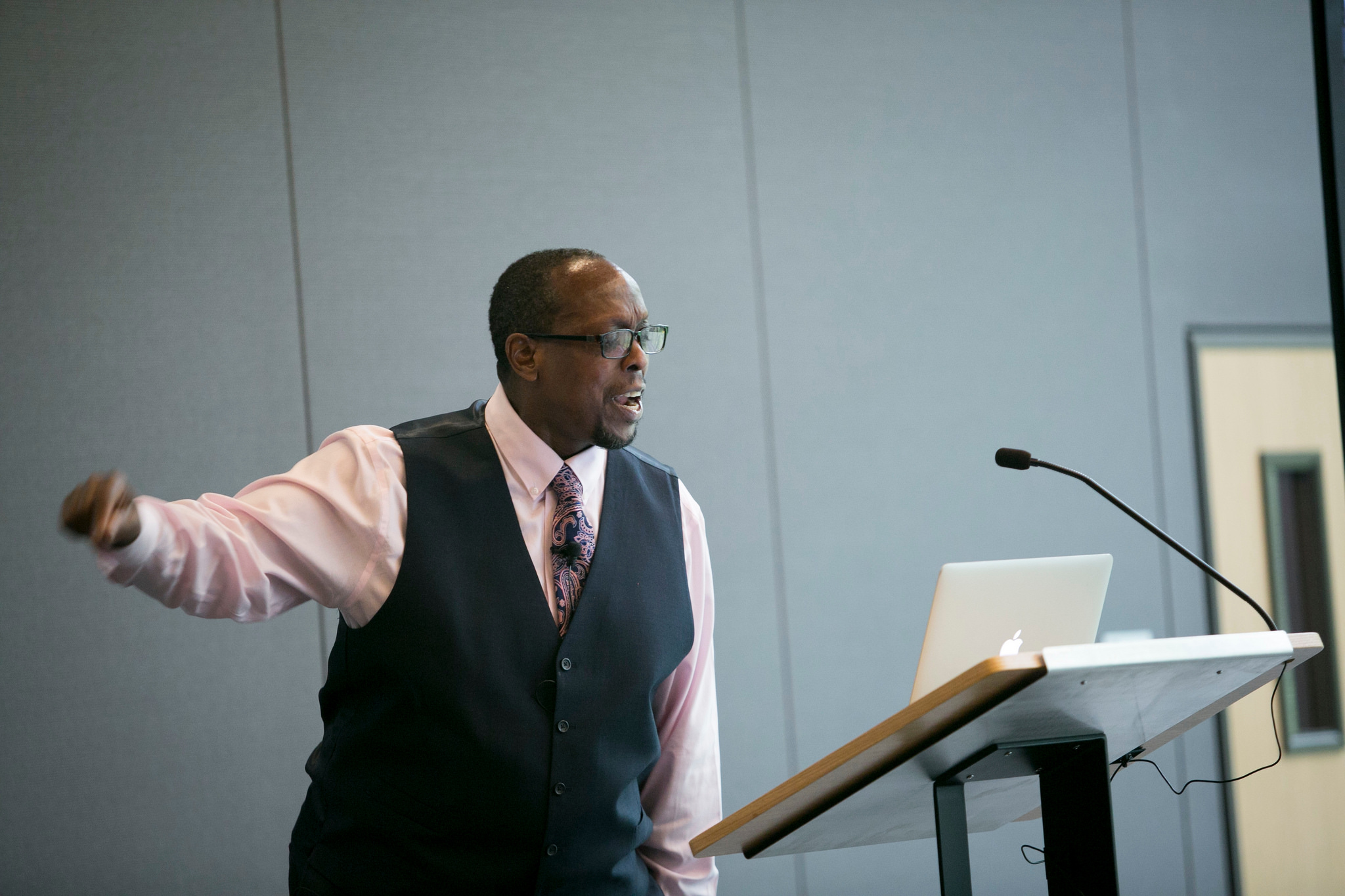 If there were such a thing as an academic rock star, Duke University’s Mark Anthony Neal would be one. Neal is a professor, hip-hop scholar, and author, who is a highly-sought after cultural critic. News outlets like the Huffington Postand WUNC regularly tap Neal, Chair of Duke’s African and African American Studies and founder of the Center for Arts, Digital Culture and Entrepreneurship, for cultural commentary – as do we. Locally, Neal is known for developing The History of Hip-Hop,a popular course he co-teaches with critically acclaimed hip-hop producer Patrick Douthit, aka 9thWonder, at Duke.

Neal and Douthit have taught the class together since 2010. The course explores the social and cultural history of hip-hop and its current global, economic and socio-political impact.

On any given night, students might engage with a Grammy-nominated hip-hop artist like Rapsody or leading cultural preservationist from the National Museum of African American History and Culture. Readers if you’re having a bit of FOMO– note that this course is open to the public.

One cold, rainy Wednesday evening last March, the Come Hear NC team traveled to the campus of Duke University to document the class. On that evening Neal and Duke political science doctoral candidate Nura Sediqe led a lecture about hip-hop and violence, ghetto pathologies, and misogyny.

Sediqe, who studies the political behavior of radicalized minorities, says “Hip-hop and the productions that emerge from it have been such an important source of knowledge for me. Political expressions emerge in meaningful ways in the lyrics, visual production and stories within the art. As political scientists, I think it’s important that more of us pay attention to hip-hop as a source to inform us of the various ways that minorities are politically conscious and engaged.”

Hip-hop, which began as a grassroots music movement in the Bronx, is now a global force, and throughout the semester Neal, Douthit and an assortment of guest lecturers unpack many facets of the genre’s history and current reality – which often tie into cultural and political movements beyond the music itself.

Take a look at the full course below. 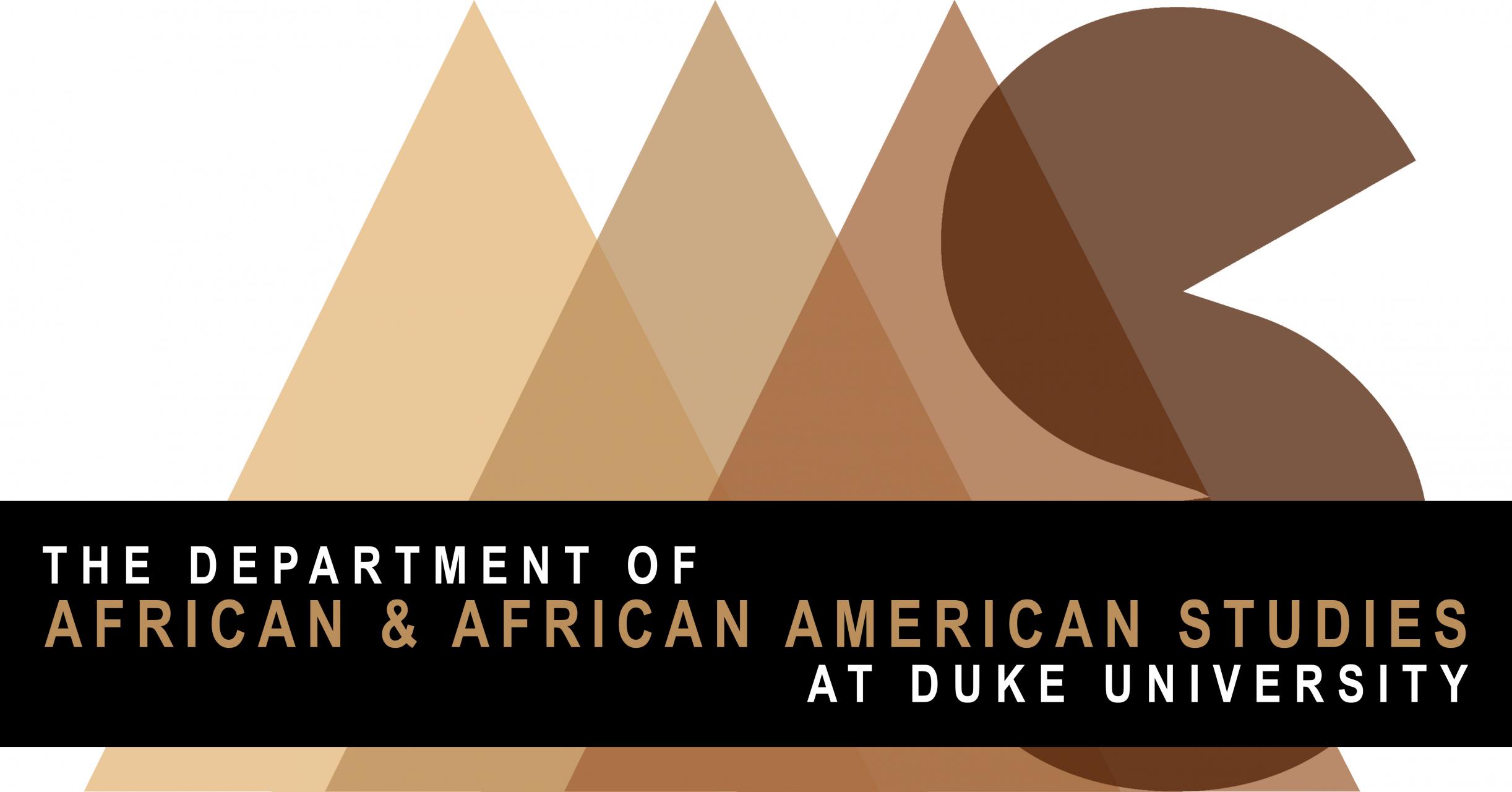 Mark Anthony Neal is the Chair of the African and African American Studies Department at Duke.
#HipHop, #MusicFestival 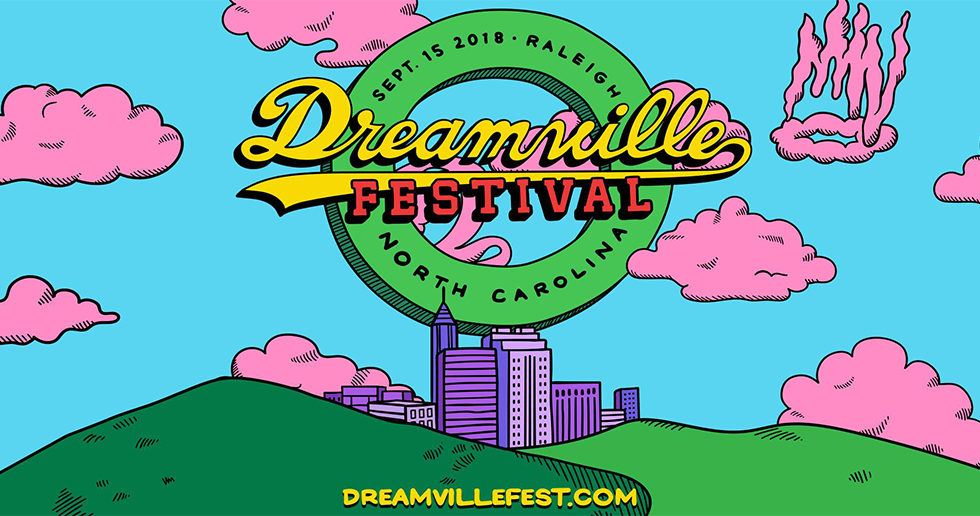 Dreamville Festival is Coming Up!

Dreamville Festival will be the first event of its kind for the region as it looks to provide a thoughtfully-curated, multi-stage music event from J. Cole, who himself was raised in nearby Fayetteville, North Carolina. The festival offers an opportunity for J. Cole to give back to his home state that has helped shape the artist he has become with a one-of-a-kind celebration of local culture, food and art that also features a curated selection of music performers blending together some of today’s biggest national acts with exciting up-and-comers.The festivals itself aims to provide a unique opportunity for locals and traveling visitors alike to gather and enjoy a music celebration in one of Raleigh’s most beautiful and historic locations, Dorothea Dix Park – Raleigh’s largest city park with over 300 acres of public greenspace.

“Dorothea Dix park is excited to host the inaugural Dreamville Fest,” says Kate Pearce, Senior Planner for Dorothea Dix Park for the City of Raleigh. “This is not only an opportunity to celebrate music and community but also a way to start to understand how Dix Park May evolve into a great music destination in the state of North Carolina.”

Dreamville Festival’s ultimate goal is to not only have a positive and substantial economic and cultural impact on the city itself and the surrounding region, but also to become one of the most anticipated annual events in the city – one that is a perfect complement to the existing event landscape and cultural fabric of the City of Raleigh.

Some of hip-hop’s heaviest hitters will be visiting Raleigh for Dreamville Festival’s inaugural year, including SZA, 21 Savage, and Big Sean, but there will be quite a few North Carolina natives alongside them on the line-up. 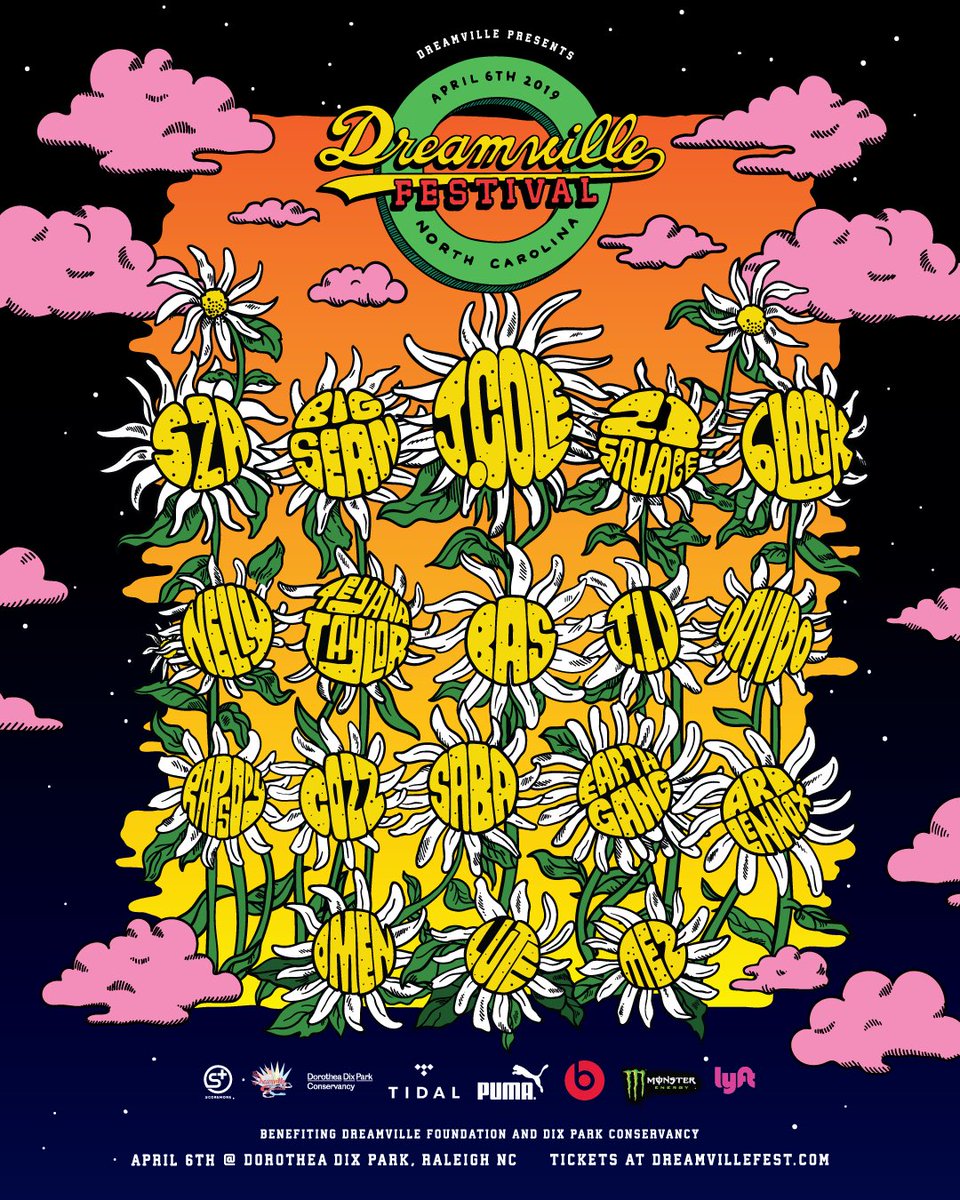 International hip-hop superstar is a friendly face around Raleigh. When he’s not selling out stadiums and dropping platinum albums, you can find him playing pick-up basketball at a local gym or shooting an off-the-cuff music video. His work with the Dreamville Foundation emphasizes his desire to uplift his community, with the mission statement: “To reveal to the urban youth, their limitless potential, through positive life- altering experiences.”

A Snow Hill, NC native, Rapsody has established herself as a major player in today’s hip-hop scene. Signed to fellow North Carolinian 9th Wonder’s label, Jamla Records, her slew of solo releases, collaborations, and features look more like a veteran’s rap-sheet than an up-and-coming phenom’s. She served as the lone feature on Kendrick Lamar’s 2015 Grammy Award winning album To Pimp a Butterfly and her most recent solo release, Laila’s Wisdom, was nominated for a Grammy in 2017 alongside Lamar, Jay-Z, Tyler the Creator, and Migos.

Hailing from Charlotte, NC, Lute was signed to J. Cole’s label, Dreamville Records, in 2015. His debut album, West1996 pt. 2, was recorded entirely in North Carolina and tells the story of his life leading up to his signing with Dreamville.

Mez grew up in Southeast Raleigh and has established himself as one of hip-hop’s premiere producers, rappers, and songwriters. Alongside his 5 solo releases, Mez has collaborated with the likes of J. Cole, Kanye West, and most famously, Dr. Dre – with his work on Dre’s 2015 release, Compton, propelling him to star-status. 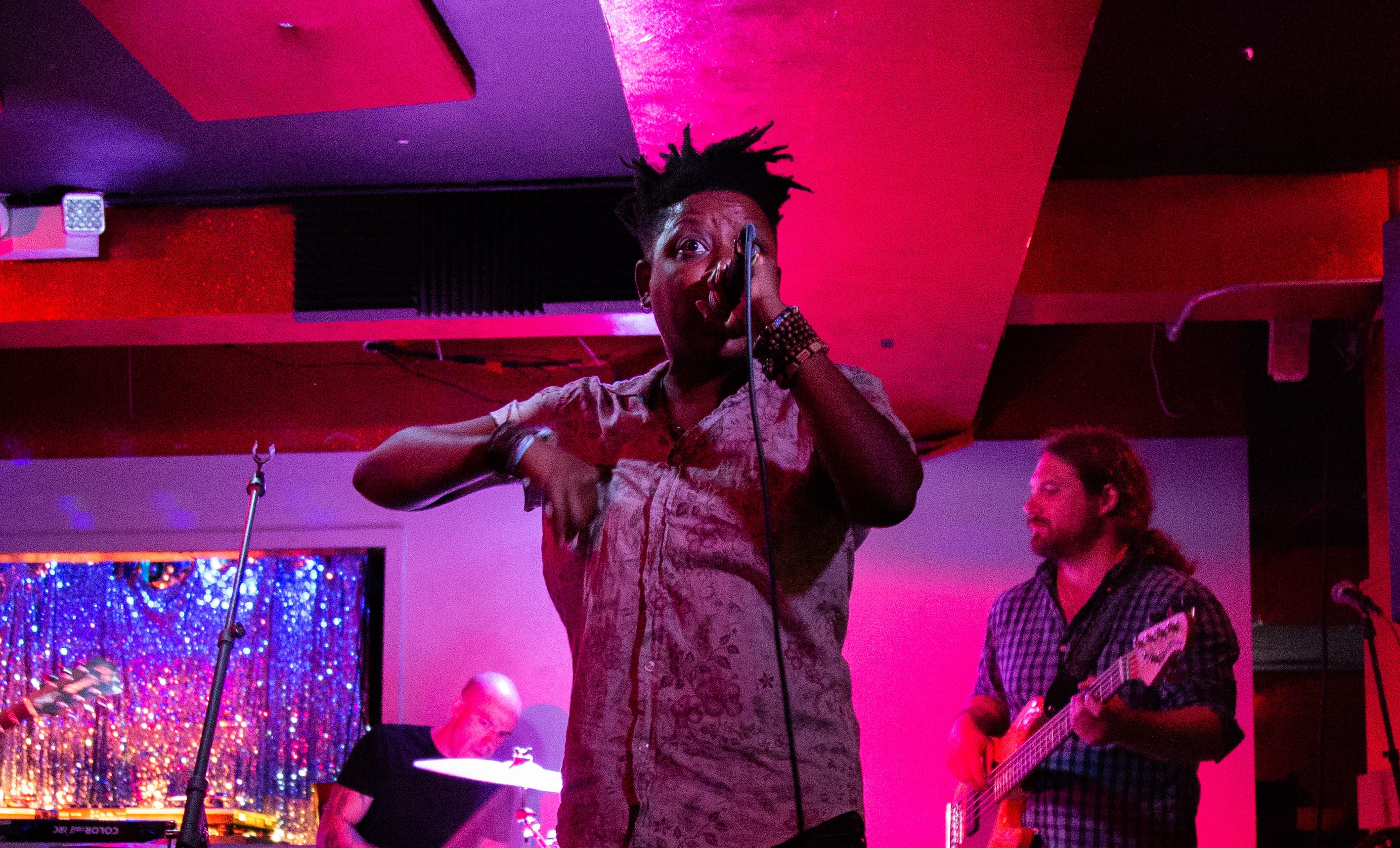 Rural and urban collide in the sound of Shirlette Ammons' music

Shirlette Ammons isn’t interested in staying in her lane. Best known for her work as a musician, she is also a poet, filmmaker, and activist who claims both rural and urban. Her childhood in the tiny eastern North Carolina community of Beautancus influences her creative voice just as much as Durham, the town she now calls home. In an interview for the North Carolina Arts Council’s 50 for 50 project, Shirlette reflected on how those places shape her sound.

Musician Shirlette Ammons reflects on her connection to North Carolina.

You grew up in eastern North Carolina. Will you talk about the creative context you grew up in and how it shaped your identity as an artist?

I have a twin sister and we grew up in rural North Carolina. We didn’t have a lot of money, but we had a lot of open space, and we were really imaginative. My first performance was for a corn field that we imagined as an arena of people, so I’ve always been creative and always had that outlet.

I grew up in church, and I always sang in the choir and recited Easter speeches as we call them – [they are] poems in essence. I always wrote short stories and drew, so I was always inclined to be creative and was always encouraged to be outside. Probably the best thing about growing up in eastern North Carolina is space…open land…and the ability to look out over the span of nothingness for miles and think. I grew up with a wonderful backdrop for becoming a creative person.

You are now a Durhamite. Will you speak to what makes Durham a good community for you to work as an artist?

I love Durham. It’s like any place that has its complexities, but for me it’s been a wonderful place to challenge myself as an artist…to reach beyond my own personal safety zones and work outside of the genres that I’ve been prescribed that I never actuallyreally ever claimed myself. Coming to Durham gave me an opportunity to really shake loose those labels that I didn’t want to own and meet creatives who I otherwise wouldn’t know, who I would not have had the opportunity to work with.

Every song on my last record Language Barrier has a different artist on it. Every artist is of boundless genres, and I’m into that. That’s kind of how I envision my life being [with] these really malleable boundaries that Durham has helped me decide how and when to challenge. I think that’s the spirt of Durham — not just musically, but also in terms of social activism. A lot of folks I know here in Durham are both those things. They are artists, and they are activists, and they negotiate both things in everything they do and celebrate those things in everything they do.

Arts are important to elevating people’s voices. The arts are important to cultivating new ideas, and also to bringing people together – not in this superficial “we’re all the same way,” but in a way that celebrates all the differences that make us unique and important and valid. That’s something I think is inherent to a democratic society. I think that’s part of any framework of a place that is required to support and celebrate humanity. There’s no way you can support the intellectual growth of a place without supporting the creative growth of a place.

Durham is complicated. There’s a really strong history of black artists who have come through here to perform. The Chitlin’ Circuit ran through here. That’s important history to be familiar with. I’m proud to claim Durham, and I think it’s up to us as artists to really make sure that what we create here is reflective of everybody and the Durham we want to see and leave behind. 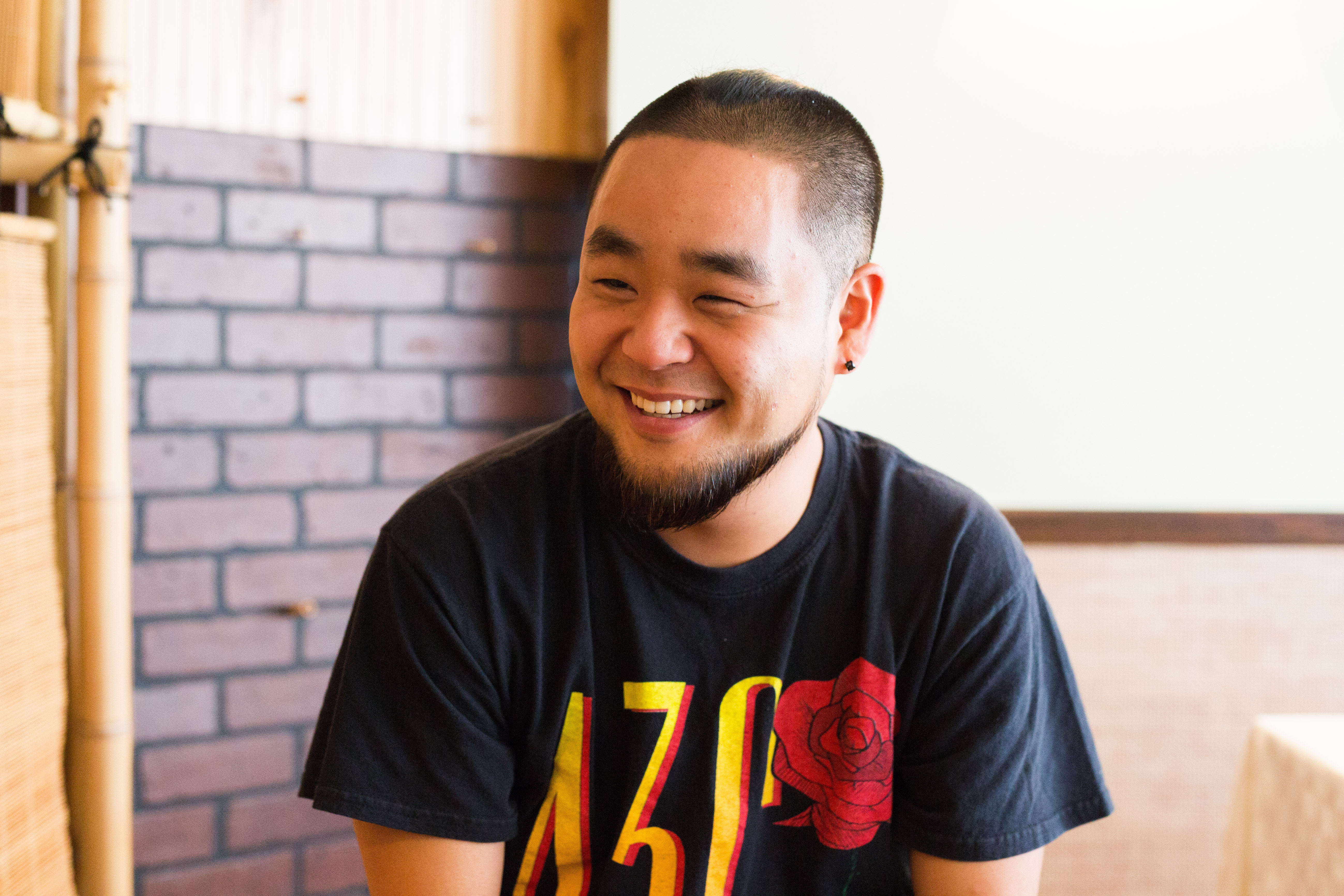 A handful of songs about North Carolina can rightfully be described as iconic. G Yamazawa's "North Cack" is one of them.

A handful of songs about North Carolina can rightfully be described as iconic.

You can probably name a few, like James Taylor’s “Going to Carolina” or Petey Pablo’s “Raise Up.” These are the songs that compel folks to embrace or dance with the nearest person who is also bursting with state pride. It’s fair to say that in 2017, G Yamazawa’s “North Cack” ascended to the pantheon of North Carolina anthems.

The song, accompanied by a viral music video directed by fellow Durhamite Kid Ethnic, electrified the internet and compelled the rapper and poetry slam champion G Yamazawa to a national stage.

There’s something special and downright appropriate that our latest state anthem was written by a first-generation American. G Yamazawa grew-up in a family that immigrated to North Carolina from Japan, and in our latest artist profile, he invites us into his universe of North Carolina music.