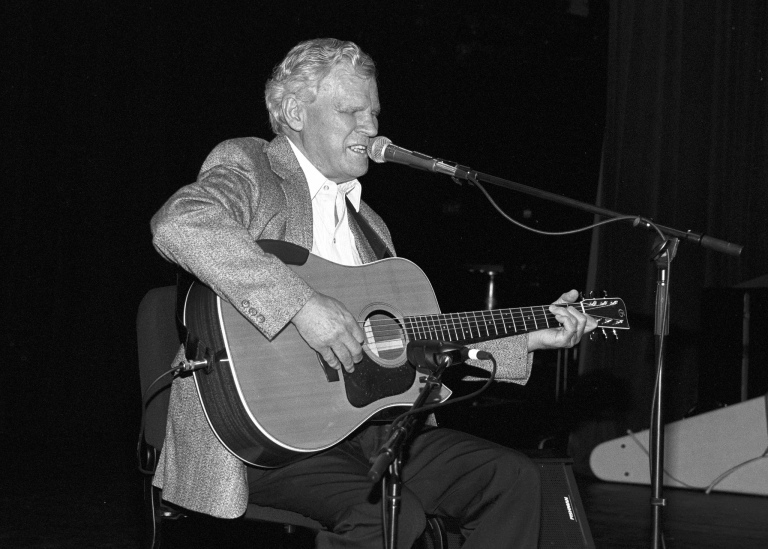 On March 3, 1923, Arthel Lane Watson, known to the world as “Doc” Watson, was born in Watauga County. The sixth of nine children, Watson developed an eye infection that left him blind as an infant, and he was sent to attend the Governor Morehead School in Raleigh.

His parents sang and encouraged their son’s interest in music.  Virtually self taught, he mastered harmonica, banjo and guitar at an early age. It was his guitar playing that garnered the greatest attention, however, due to his unique style.  In 1953 he was playing with a band that often did not have a fiddle player.  Watson taught himself to play the fiddle parts on his guitar, often at breakneck speeds.

Although he had been playing locally for years, Watson was not discovered nationally until the 1960s during the folk music revival.  In 1961 he and several other musicians played in Greenwich Village. That led to other concerts, and Watson was invited to perform at the Newport Folk Festival in 1963 and 1964.

Watson never claimed to be a purist; he played music that he liked and he had eclectic taste. During his long career he won eight Grammys and, in 1997, the National Medal of Arts.

This post is originally from NCDNCR's "On This Day" blog .

Finally, enjoy Doc Watson with the Nashville Bluegrass Band performing "I'll Fly Away" at the annual Sunday Morning Gospel Set at Merlefest in 2012. This would be Doc Watson's final live performance.