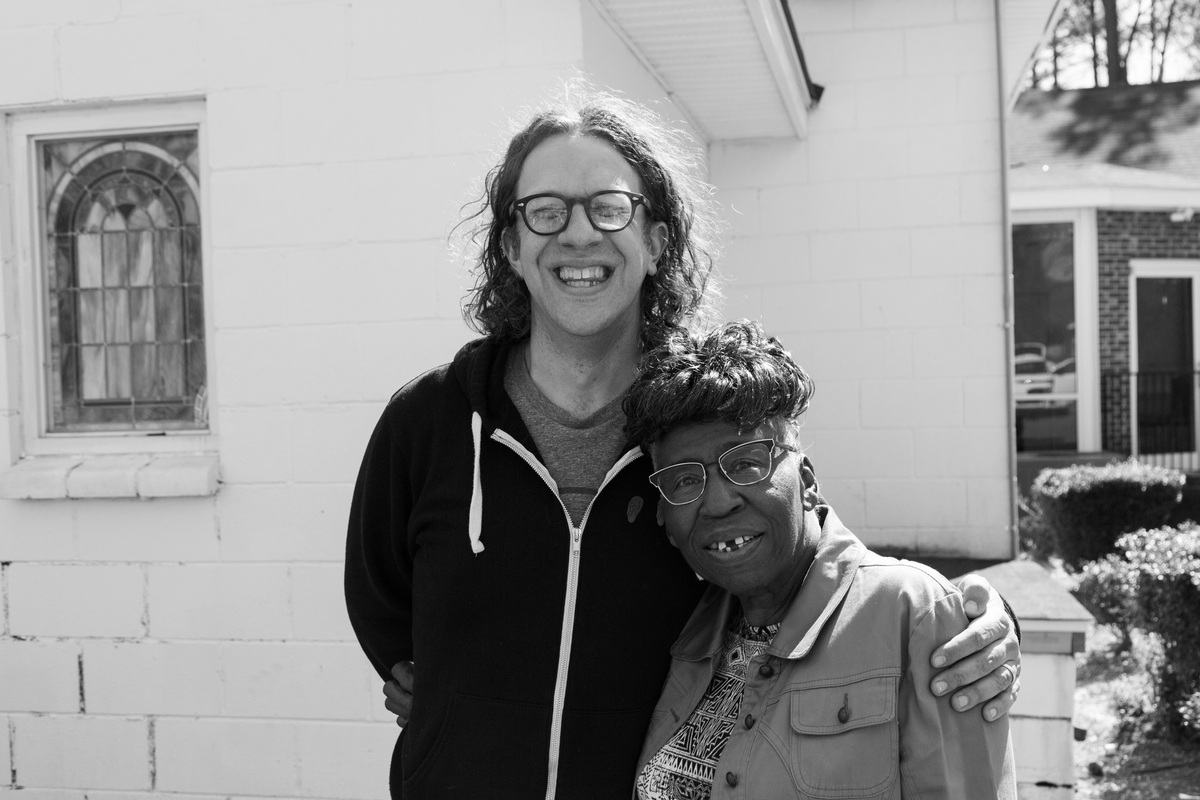 Story and photos by Sandra Davidson

Sister Lena Mae Perry says music is like medicine. She would know. At 80-years-old, Sister Perry has helmed the Branchettes, a celebrated gospel group from Johnston County, North Carolina, for decades. To see her perform is to witness the healing powers of music, and, at risk of cliché, to be taken to church.

Born in Johnston County in 1940, she grew up in a farming family that deeply valued education, faith, and music.

“In my twelve years of going to school, I missed one day out of school,” says Sister Perry. “We had to miss that one day because my daddy said we had to stay home and pick cotton. When the school bus would come by, we’d lie down between the rows so the other kids on the school bus couldn’t see us picking cotton. My daddy regretted [it]. It hurt him to have to ask us to stay home that day, but we didn’t ever have to stay home anymore for the farming.”

Music was a part of daily life and a cornerstone of how her family worshiped. Her grandfather played guitar, and her parents traveled around singing in local churches. From a very young age, Sister Perry’s family encouraged her to sing with her siblings in church. She remembers rehearsing on lunch breaks from working tobacco.

“We would just be singing until mama called us in for lunch. It was wonderful coming up with the music and the things we were taught. It grew up in us.”

Over thirty years ago, Sister Perry and Ethel Eliot, a fellow choir singer at Long Branch Disciples of Christ Church in Newton Grove, N.C., formed the gospel group the Branchettes, deliberately named to reference the church that brought them together in the first place. Ever since the Branchettes have brought the gospel and traditional African American congregational hymns to audiences around North Carolina and beyond. In 1995 the group received the N.C. Heritage Award, an honor that acknowledged the band’s contributions to traditional arts in the state.

Ethel Eliot passed away in 2004, but Sister Perry and pianist Wilbur Tharpe continued to perform as the Branchettes. In 2015, Sister Perry met another musician with whom she would develop an important musical relationship: Phil Cook 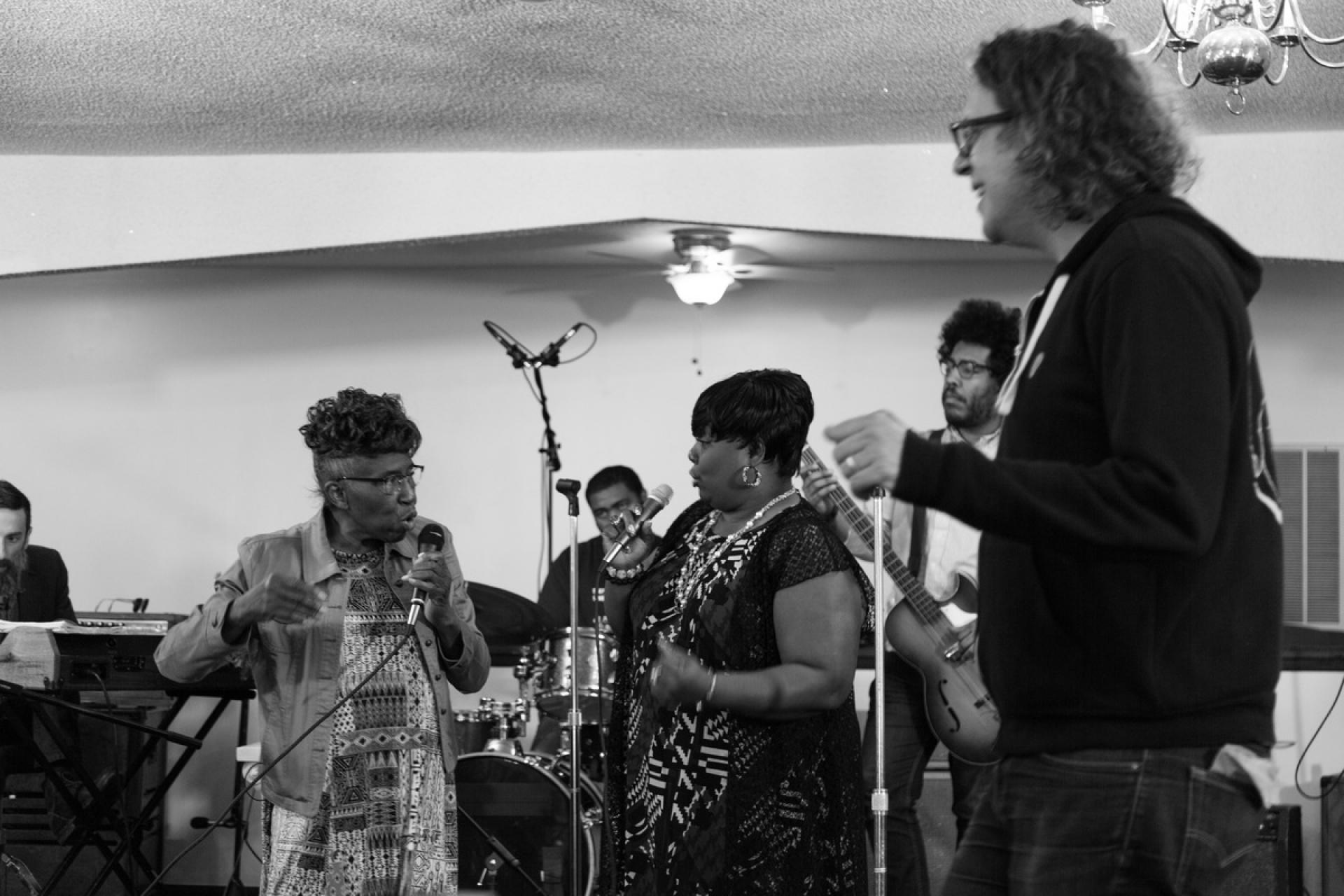 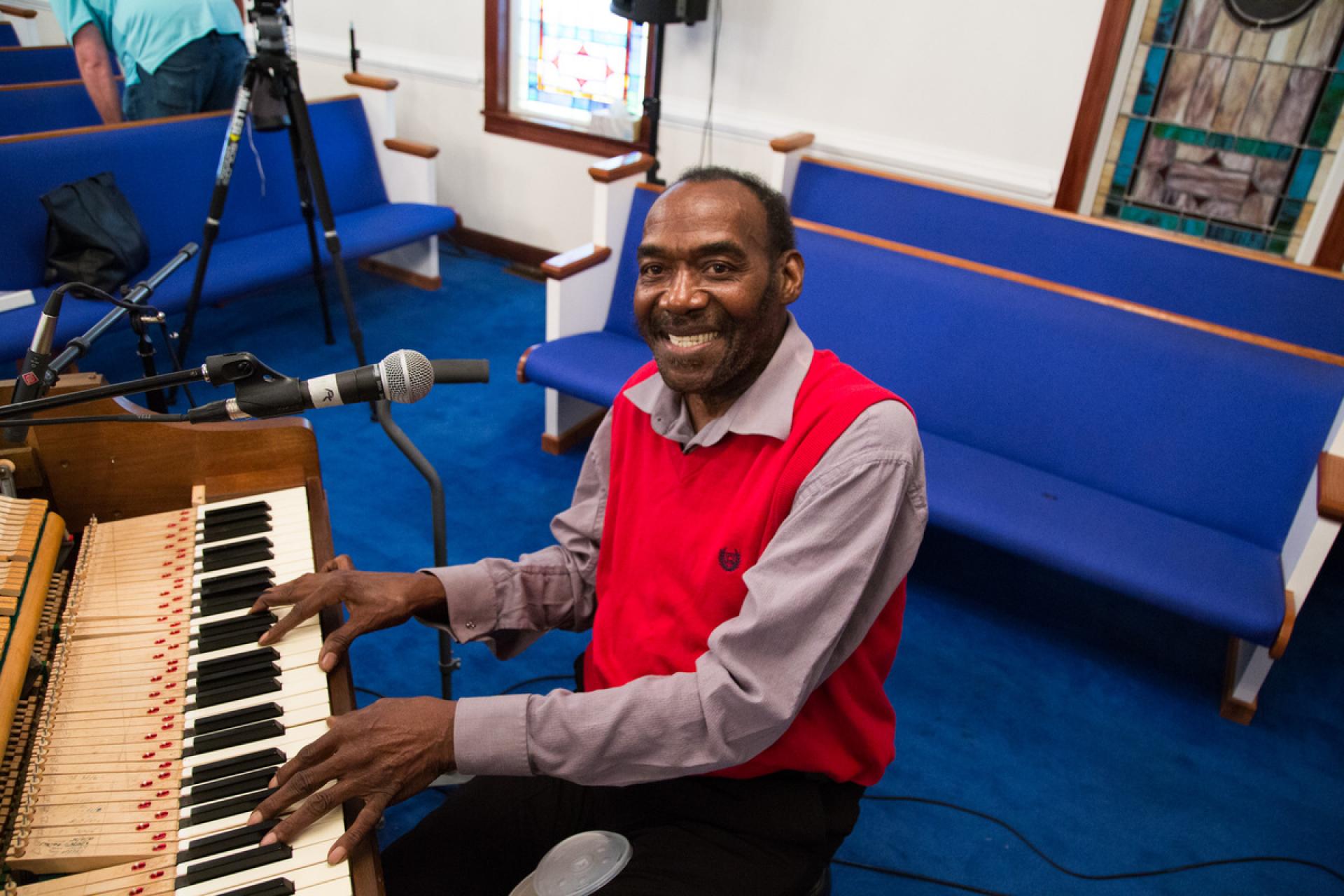 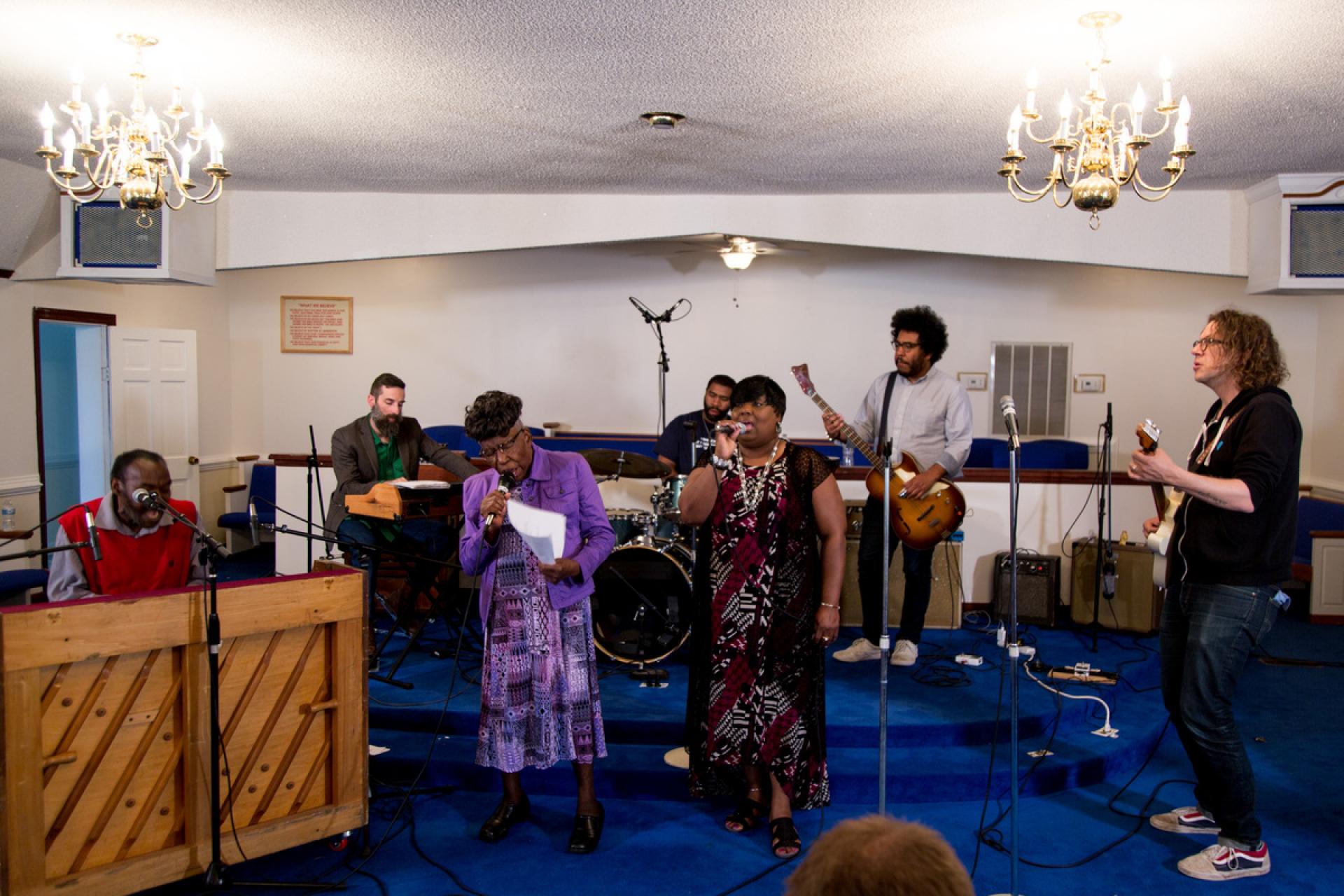 Cook is a 40-year-old indie musician based in Durham who moved to North Carolina from Wisconsin in the early 2000s on a quest to be closer to the Southern music he loved. He never left. A darling of the folk and indie music scene, Phil was introduced to Sister Perry through Music Maker Relief Foundation after reaching out to them for curatorial guidance on a project he was working on for Duke Performances. The two first performed together at Duke Gardens in 2015.

“We had rehearsed a few songs together that I knew we were going to do, but as happens with Sister Perry she’ll get in front of people and the Lord will speak to her and tell her what song needs to happen next. That meant a song came up that we hadn’t rehearsed,” remembers Cook.

“I just sat down and let her and Wilbur play. It was a song called ‘God Will Take Care of You.’ I saw the entire first 40-yards of people burst into tears at the same time. She goes to her place, and she surrenders, and she’s open, and she passes it on…and then you see everyone else surrender. That’s the real.”

That deep love of music and its spiritual power has bonded Sister Perry and Cook since, and the two have formed a deep – if somewhat unlikely – friendship.

“It doesn’t take me long to scope out people and learn people and what they’re all about,” says Sister Perry when reflecting on her relationship with Cook. “I like his music. The songs that Phil sings, they’re beautiful. They carry a message, and the gospel music that I sing – it carries a message. I was needing to get out and meet new people and Phil was so…like he’d known me for a long time. We just bonded right together. Ever since then Phil’s been in my corner, and I’m in his corner.”

Sister Perry and Cook’s friendship has taken them into music classrooms across central North Carolina and, more recently, into a shared recording project supported by the North Carolina Arts Council for Come Hear North Carolina.

Last April, the Branchettes recorded their first live album in their 30-plus years as a group back where it all began: at Long Branch Disciples of Christ Church. The session featured long-time Branchettes Sister Perry and Wilbur Tharpe plus an assortment of younger artists who helped fill out the sound.

The Branchettes have recorded their music in a studio setting but Cook – who is producing the record – wanted to capture the alchemy of Sister Perry’s live performances that struck the audience at Duke Gardens back in 2015.

“As a musician who plays and performs live and has seen just what happens when you are in front of people and the way the spirit emerges, that to me felt like a condition [of the project],” says Cook. “We should try and invite the spirit in a live setting.”

In an interview on the eve of the recording session, Sister Perry said “We’re putting God first, and when you put him first no matter what come and go, he’ll work it out for you. He’ll do it every time.”

The recording will be released in 2020 on Phil Cook’s new gospel label, and a documentary about the project created by filmmaker DL Anderson will follow.

Sister Perry will turn 81 on January 1, 2020, and at this rate, the year will be a big one for her and her music. She doesn’t have plans to slow down.

“I pray that I can keep my voice, that He’ll keep me up on my feet so I can go and do the things that I need to do cause people look for something to help lift their burdens,” says Sister Perry.

“Music is a healing process. I don’t care if you’re down in the dumps. I don’t care what happened yesterday, what you think might happen tomorrow. There’s a comfort [in it]. It’s like taking medication. I carry the gospel in song, and I really, really love it. I do. And I’ve never missed a beat, honey.” 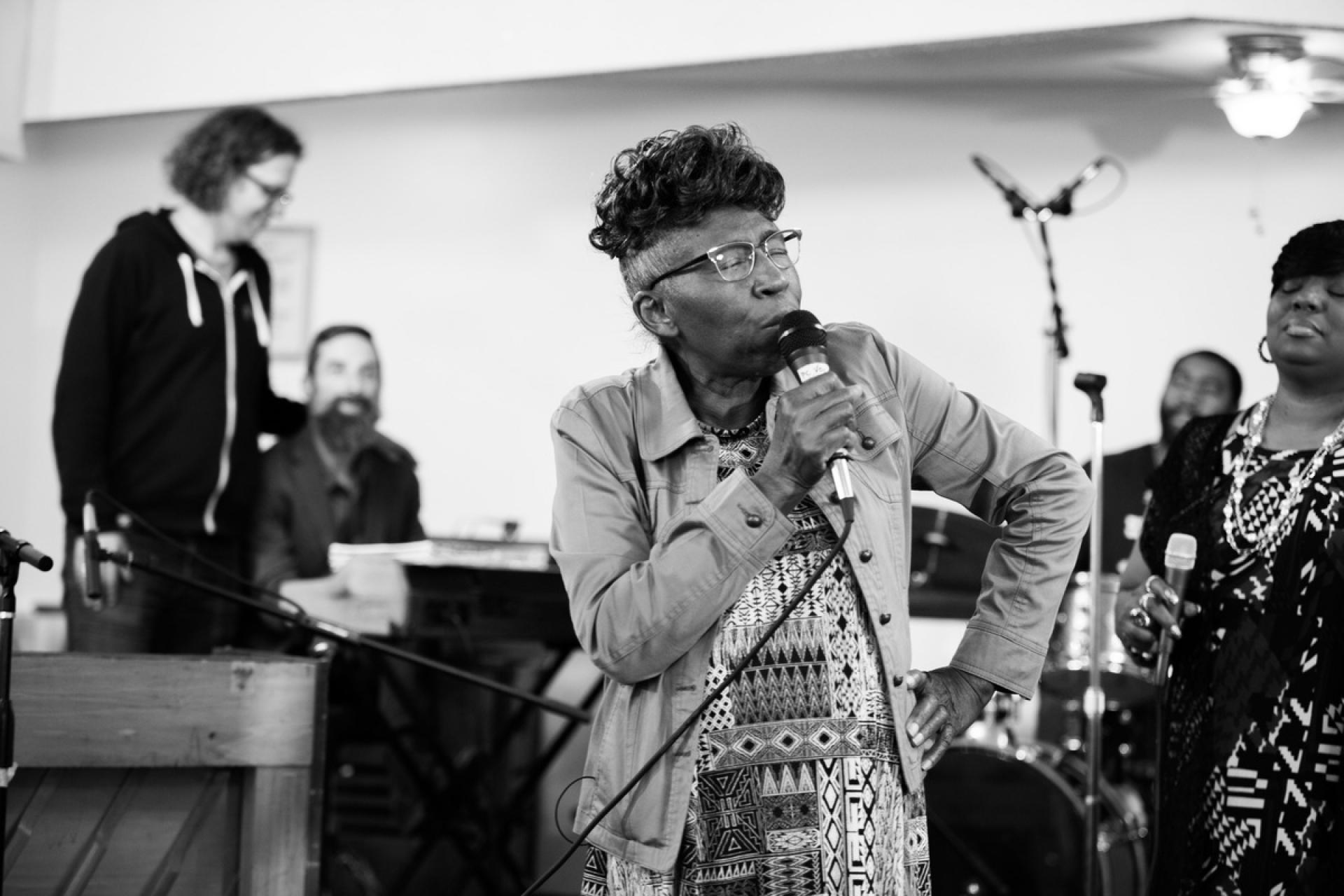