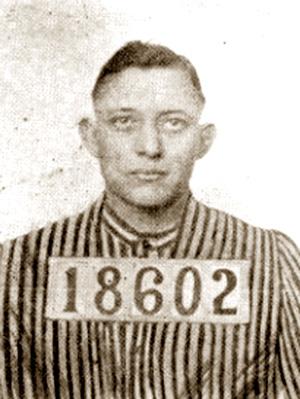 The Story of Otto The Bandit

On the eve of New Year’ Eve, we wanted to share a story from the Blue Ridge Music Trails of North Carolina guidebook about a famous outlaw memorialized in song. Enjoy below.

On New Year’s Eve in 1930, one of North Carolina’s most famous outlaws was killed in a barrage of gunfire. Otto Wood was born in the Dellaplane community of Wilkes County. He spent most of his short life traveling across the country as a bootlegger, a bandit, and a fugitive. As the song would later say, “He loved the women, he hated the law and he just wouldn’t take nobody’s jaw.”

Wood committed his first crime (stealing a bicycle) as a teenager. He did time in the Old Wilkes County jail, also the temporary home of another North Carolina music legend, Tom Dooley. In 1923, Otto shot and killed a pawn broker in Greensboro named A. W. Kaplan. Allegedly, the argument arose when Kaplan sold a watch Wood had pawned containing a photograph of his beloved mother. Though he was sentenced to thirty years in prison, Wood managed to break out of the North Carolina State Prison four times, quite a feat considering he had a lame foot and lost a hand in a hunting accident as a teenager.

Despite his many crimes, Wood was beloved by many people in western North Carolina. In a time of severe economic hardship, he was a Robin Hood character, a generous man who robbed only the rich and was kind to all who remembered him. His exploits are still vividly recalled around Wilkes County to this day. Thousands of people attended Otto Wood’s funeral and the citizens of Salisbury, where he died, raised money to send his body to his mother in West Virginia.

Two songs about Wood were pressed the year after his death. Walter “Kid” Smith and the Carolina Buddies recorded perhaps the most enduring version on the Columbia label just two months after he was laid to rest. The song has gone on to be recorded by Doc Watson. It is also a favorite of Wilkes County musician Herb Key.