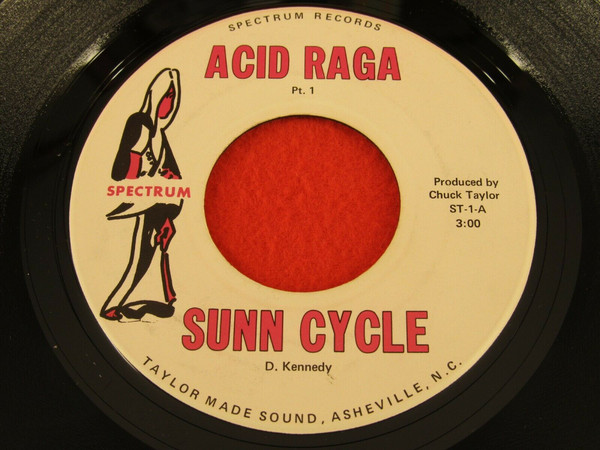 Asheville’s psychedelic revolution began, not with a bang but with a raga. A nod to the Indian motifs being woven into progressive rock during the late ’60s, “Acid Raga Pt. 1 & 2” was
conjured in a sleepy iteration of Asheville, considered by most to be a retirement community. Named for the Blue Cheer song of the same name, Sunn Cycle was comprised of drummer Tommy Walker of Knoxville, Tenn., guitarist Danny Kennedy of Cramerton, N.C., and organist Larry Blanton of Gaffney, S.C. Bassist Billy Farmer, the lone Asheville native, had spent his high school years strumming guitar for the Fabulous Untils, an R&B group comprised of hometown soul heroes Charles Pickens (of the journeymen soul duo Pic and Bill) and Stanley Baird (of Bite, Chew & Spit and, later, New Central Connection Unlimited). After nearly eight years on the road, Farmer returned to Asheville where he crossed paths with Larry Phillips, who owned the Lake Lure nightclub the El Tango, and ran the Asheville booking agency, Talent Attractions. Although a guitarist by trade, Philips convinced Farmer to fill the bass vacancy in Sunn Cycle. The quartet worked small rooms through the Southeast, using both Asheville and Knoxville as home bases. While they earned a reputation for raucous renditions of Steppenwolf, Vanilla Fudge, and Jimi Hendrix hits, their enduring legacy would be built on five furious minutes of improvised insanity dubbed “Acid Raga,” a lysergic cacophony, recorded on a Sunday in one take, smeared across both sides of their lone 45.

Essentially a sound check for a premeditated recording session, “Acid Raga Pt. 1 & 2” captures the quartet pounding on their instruments, completely unaware that studio owner Chuck Taylor had begun rolling. Unscripted and unrestrained, “Acid Raga” is a pure distillation of the brilliant and chaotic alchemy beginning to swell in Appalachia’s musical underground during the late ’60s.

On August 9th, 2018, all four members of Sunn Cycle reconvened at the studios of AshevilleFM, where they were interviewed by musicologist Vance Pollock for his weekly radio show, Riffin’. This oral history has been assembled from the resultant conversation; it has been edited for length and continuity.

Larry Blanton: We used to call “Larry Phillips” the Terror of Asheville. Talent Attractions? We changed it to “Terror of Asheville.” You didn’t know what you were gonna find when you got to the gig. He had an office in the top of the Northwest Bank Building [later, the BB&T Building], and we used to have to go up there and wait by his door until he came out. One day we took [the letters in] “Talent Attractions” and made the word “Latent Rat Actions.”

Tommy Walker: It was early September maybe even late August of 1968. I was sharing an apartment [in Knoxville] with a guitar player, who later turned out to be my cousin, and we formed the band Sunn Cycle. Our inspiration was heavy rock and roll music—Steppenwolf and things of that sort. Eventually Larry Blanton came through town with one of the Carolina road bands and played at one of the clubs near the University of Tennessee. He left that band and joined us. We ended up with Billy Farmer on Bass and Danny Kennedy on guitar—which seemed to be the combination that worked—and we were out gigging within a couple of weeks.

Danny Kennedy: What was the club down on the river? And they had chicken wire up over the stage? The Casa Loma! If they liked you, they’d throw empty beer bottles. If they didn’t like you, they’d throw full ones.

Larry Blanton: We used to drive back home [to Asheville], Billy and I, every Saturday night. We’d get to play for some of the frat parties and got to know some of the students that were the thing on campus, and it was great. What Asheville didn’t have; Knoxville made up ten times for it.

Billy Farmer: Chuck Taylor actually found us. There was a big battle of the bands in Asheville in early 1969. And somehow, we got booked in as the professional headliners for this thing. We weren’t part of the competition but a couple of us were judges on one weekend; the following weekend they had the concert and the show in the Asheville Coliseum, and we played then. That’s where Chuck saw us.

Tommy Walker: We were there [at his studio] and we just did this to get loosened up before we recorded what we were there to do. We got through doing it and Chuck, in the control room, said, “Okay, we’ll keep that one.” And we were saying “You’ll what?” We didn’t even know he’d recorded it, much less that he was gonna put it out as a 45.

"Acid Raga Pt. 1 & 2" from the Numero Group compilation, Warfaring Strangers: Acid Nightmares, on which Jonathan Kirby was a producer.

Danny Kennedy: We had played a gig that previous night. We were up pretty late. We were all pretty much ragged by the time we got in the studio.

Billy Farmer: Chuck, he titled that song. And like I said—now this is just my opinion—it was just more of a jam. We were just running through something and—poof. Next thing I know, it’s out, floating around.

Larry Blanton: We had to more or less teach him how to be an engineer. He had the equipment, but—it’s like an instrument owner and an instrument player? There’s a big difference.

Tommy Walker: [Regarding the title, “Acid Raga”] I think realistically, there’s more of a perception of wildness than there was true wildness. For example, when I was in high school, everybody assumed I was on drugs. I wasn’t on any drugs—I didn’t even drink. I was always at band practice. I just wanted to play music.

Larry Blanton: If I had to do it all over again, I wouldn’t change a thing. I’d leave it just like it is. I wish we could have done more; you can only do so much and then fate guides your way.

Danny Kennedy: To me, it was one of the better parts of my musical career. I wish I could have stayed with them longer, but like Larry said, fate takes over. 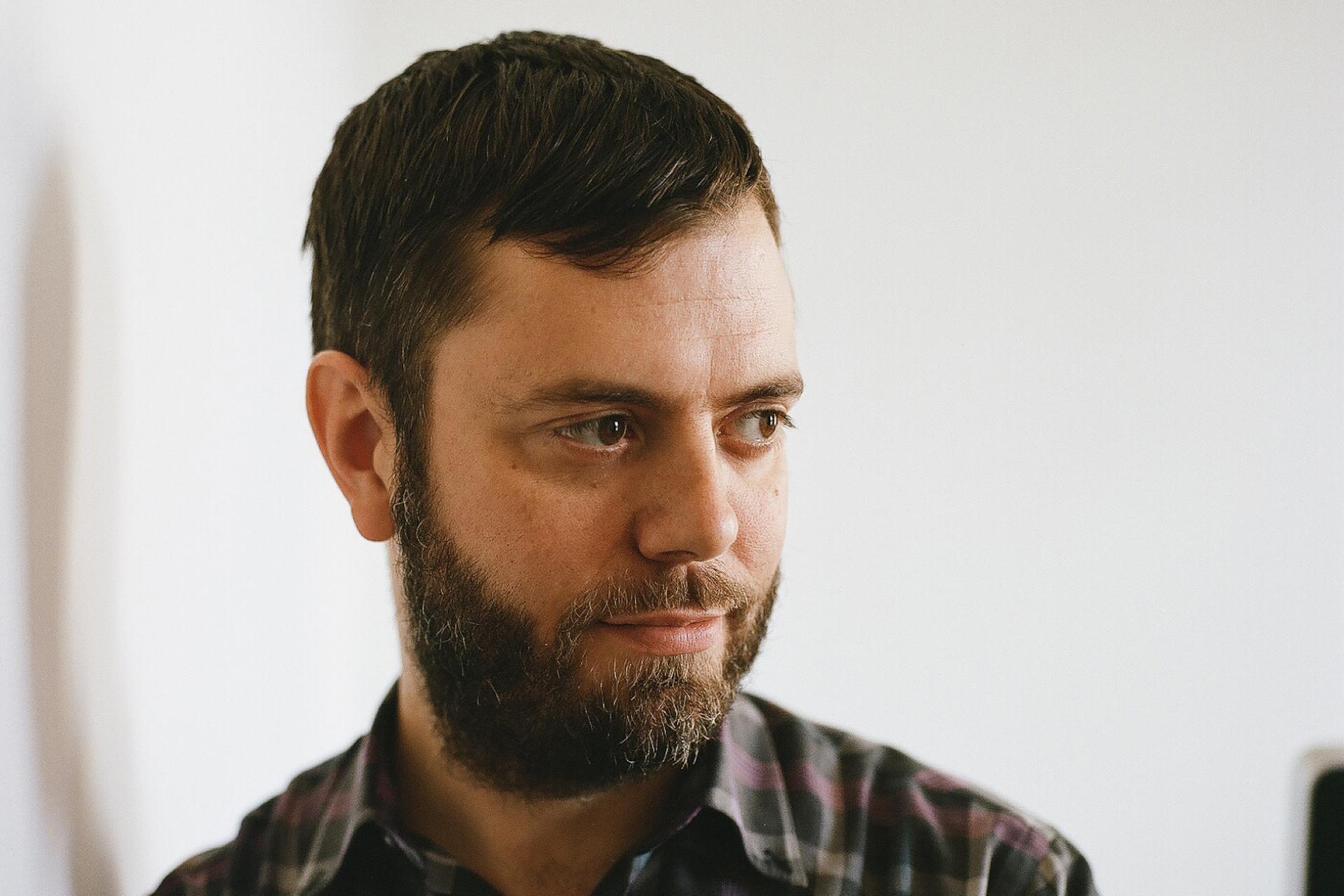 Jonathan Kirby is a record collector, author, and producer with the esteemed reissue label, the Numero Group. A native of Winston-Salem, he is an authority on music recorded in the Carolinas and has amassed thousands of independently produced records from the ‘60s, ‘70s, and ‘80s, spanning all genres from doo-wop to hip-hop, folk to funk to rock. From 2007 to 2010, he served as the Associate Editor for the Brooklyn-based music Journal, Wax Poetics, before joining the Numero Group in 2011. He has been nominated for two Grammys in relation to his archival work—in 2014 for his expansive liner notes for Purple Snow: Forecasting the Minneapolis Sound and again in 2017 for producing Bobo Yeye: Belle Epoque in Upper Volta. He returned to Winston-Salem in May of 2018 to intensify his research and preservation of the underrated, unknown, and marginalized musicians of North Carolina. He has just completed the cover story for the Oxford American South Carolina Music Issue, where he goes deep on the musical accomplishments of Lake City native and astronaut Dr. Ronald McNair, whose untimely death aboard the Challenger in 1986 put a tragic end to saxophone solos performed in orbit.