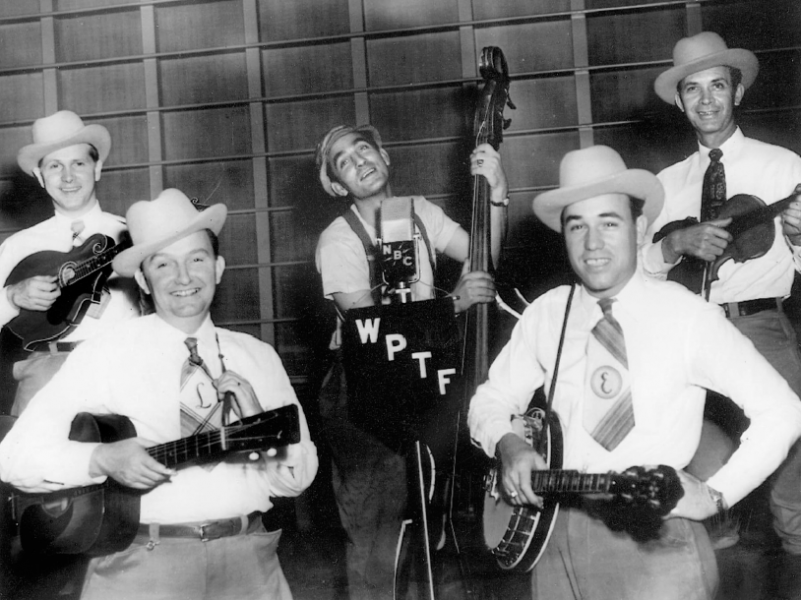 Earl Scruggs and his powerful, groundbreaking banjo style transformed the world of country string band music, helped create bluegrass, and took this style beyond the South into the central strands of American culture.

The propulsive three-finger picking that North Carolina native Scruggs developed as a child became a central element of bluegrass music in the 1940s and for decades has represented the sound of North Carolina’s traditional music via radio, recordings, television and film. His signature tune Foggy Mountain Breakdown not only grew universally known as the theme of the 1967 film Bonnie & Clyde, but also helped create a spark of authenticity that brought countless pickers to his instrument.

Scruggs was born Jan. 6, 1924, in tiny Flint Hill, outside of Shelby in the North Carolina Piedmont, a musical breeding ground as well as an agricultural center focused on cotton. Music filled the farmhouse that was home to the family—Earl, two brothers, two sisters and parents George and Lula Scruggs, all of whom played at least one instrument.

Young Earl’s life took a sorrowful turn at age four, when George Elam Scruggs died, and the family fell on hard times. Like all the family members at home, young Earl grew up working the farm from first light to dark to tend the crops that paid their way. The nation was going through the Great Depression.

“It was pretty rough all the way up through the forties,” Scruggs said in 2007. “But everybody was born so poor they didn’t know any better and each year it’d get a little bit better.”

By age six, Earl had started learning guitar and banjo as time allowed from his chores and schoolwork. The five-string banjo, a descendant of the African plucked instrument called the akonting, had been played by black and white musicians since the eighteenth century in America, but by the late 1920s no longer held pride of place in popular music.

"I was in there by myself one day playing this tune called ‘Reuben’ that I still play, on D [tuning],” he said. “And all of a sudden, I had this roll that I still do, going. And Horace, my brother, said I came out of the room, and said, 'I got it! I got it!’”

- Earl Scruggs in an interview with Thomas Goldsmith, Earl Scruggs and Foggy Mountain Breakdown: The Making of an American Classic, University of Illinois, Champaign-Urbana, 2019.

Earl Scruggs changed all that beginning with his discovery at age 10 or 11 that he could advance the style of banjo picking heard around the region by using his third right-hand finger in a “roll,’ or smoothly organized succession of notes. Scruggs often portrayed his own arrival at the style as taking place in a sort of trance state.

"You've sat in a daydream like, and be picking and not even noticing what you're doing?" Scruggs asked me in a 1998 interview. "That was the mode I was in." He had been sitting, he said, in the family’s Flint Hill front room, or parlor, picking the banjo.

"I was in there by myself one day playing this tune called ‘Reuben’ that I still play, on D [tuning],” he said. “And all of a sudden, I had this roll that I still do, going. And Horace, my brother, said I came out of the room, and said, 'I got it! I got it!’”

During his school years, Scruggs played with local acts, then with the regionally popular Morris Brothers, and by 1945 with Lost John Miller and his Allied Kentuckians, based in Knoxville. The breakup of that band led to an exact moment that could be called the birth of bluegrass: 10 p.m., Dec. 8, 1945, when Scruggs first wielded his banjo on the Grand Ole Opry stage in Nashville with Bill Monroe and his Blue Grass Boys.

At age 21, Scruggs had accepted a job offer days earlier with powerful mandolinist and singer Monroe, a show business veteran at 34 and already a prime attraction on Opry live performances and radio shows. Also featuring vocalist Lester Flatt, the Blue Grass Boys that assembled by 1946 are called the “classic band” of bluegrass, even though the name for the style had yet to be adopted. This band set a lasting standard with constant touring and by recording such compelling tunes such as “Blue Moon of Kentucky” and “Will You Be Loving Another Man.”

However, by early 1948, Scruggs and picking partner Flatt left Monroe and started their own act, emphasizing their musical differences from Monroe. Scruggs was to stand at Flatt’s side on stage for 21 years as they made notable strides to commercial success. Also, in 1948, Scruggs married the former Louise Certain, the love of his life and his career-long business adviser.

Recording first for Mercury Records, then for Columbia, Flatt and Scruggs issued a string of bluegrass staples including the vocal numbers “Dim Lights Thick Smoke,” “Cabin in Caroline,” “Before I Met You” and “Rollin’ in my Sweet Baby’s Arms,” and instrumentals “Foggy Mountain Breakdown,” “Shuckin’ the Corn,” and “Earl’s Breakdown.”

The first generations of bluegrass banjo pickers, such as Ralph Stanley, Sonny Osborne, Alan Shelton, and J.D. Crowe, developed variations of Scruggs’ difficult, complex style. During the late 1950s and early ‘60s, city dwellers from both coasts labored, then triumphed at playing his tunes. The banjo as an instrument rocketed in popularity, domestically and abroad, powered by Scruggs and Pete Seeger and other folk revivalists.

"I was driving down the road with the radio on,” banjo notable Doug Dillard recalled his first-time hearing Scruggs. “All of a sudden I heard this incredible banjo music. I got so excited that I drove off the road and down into a ditch. I had to be towed out."

Major milestones for the act included Grand Ole Opry membership in 1955, a string of syndicated television appearances, and lucrative engagements on the college and folk-music circuit. Then came two career-changing 1960s media gigs: The placement of their theme music and personal appearances on the popular “Beverly Hillbillies” sitcom, and the choice of the rocket-tempoed “Foggy Mountain Breakdown” as the identifying music of Bonnie and Clyde. They made a pioneering, wildly received trip to Japan in 1968.

As the ‘60s rolled, Flatt and Scruggs moved away from a hard-core country-bluegrass style, recording contemporary tunes that often downplayed the banjo. And the bandleaders headed in different musical and societal directions. Scruggs gravitated to the new folk-rock favored by sons Gary and Randy. Flatt preferred a more traditional sound. By 1969, personal and professional quarrels led to lawsuits from both sides, with allegations and a breakup agreement settled at year’s end.

Scruggs got right back to work, with sons Randy, on guitar, and Gary, on bass, (and later Steve on keyboards) in a new band and a more adventurous direction that included electric instruments and drums. The Earl Scruggs Revue became a recording and concert success, though some fans complained Scruggs had strayed too far from his roots.

With the Revue until roughly the start of the 80s, then with bands of family and friends in later years, Scruggs provided a mix of bluegrass and country rock in all sorts of venues. He was so widely admired that his records featured performers including Johnny Cash, Linda Ronstadt, Sting, Leon Russell, and Vince Gill. Comedian-movie star Steve Martin emerged as a major Scruggs booster and picking partner.

Through the several remaining decades Scruggs earned honors that defy this space to list, but that include two separate Grammys for “Foggy Mountain Breakdown,” induction with Flatt into the Country Music Hall of Fame and the International Bluegrass Hall of Fame, a Lifetime Achievement Award from the Recording Academy, and the North Carolina Heritage Award.

"I was driving down the road with the radio on,” banjo notable Doug Dillard recalled his first-time hearing Scruggs. “All of a sudden I heard this incredible banjo music. I got so excited that I drove off the road and down into a ditch. I had to be towed out."

Beyond these notable shows of support, Scruggs was rewarded by the respect and attention of millions of fans of bluegrass, as well as the admiration of some of the most highly regarded musicians of his era: from Bob Dylan to Bela Fleck, from Emmylou Harris to Elton John.

Through it all — Scruggs died in 2012 at 88 — he hewed to an image centered on love of family and music, gentle good humor and disposition, and a grounding in life circumstances that were often tough, but always surmountable.

In the end, the soft-spoken farm boy Earl Eugene Scruggs had achieved literal fame and fortune simply through loving the banjo and playing it so devastatingly well. He also carried North Carolina’s lively, string-driven music with him to a prominent place in American culture, from the 1940s to the 2010s and beyond. 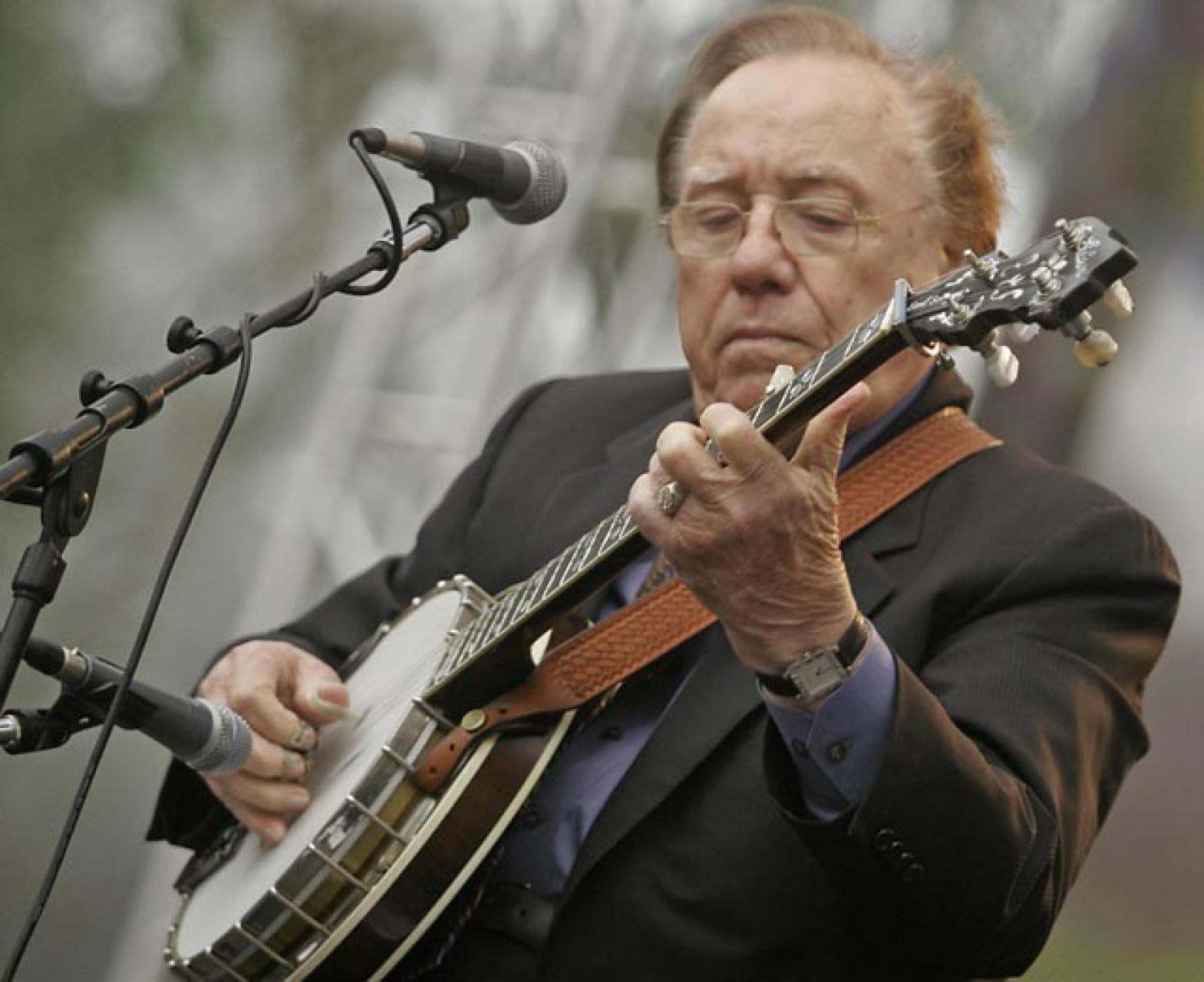 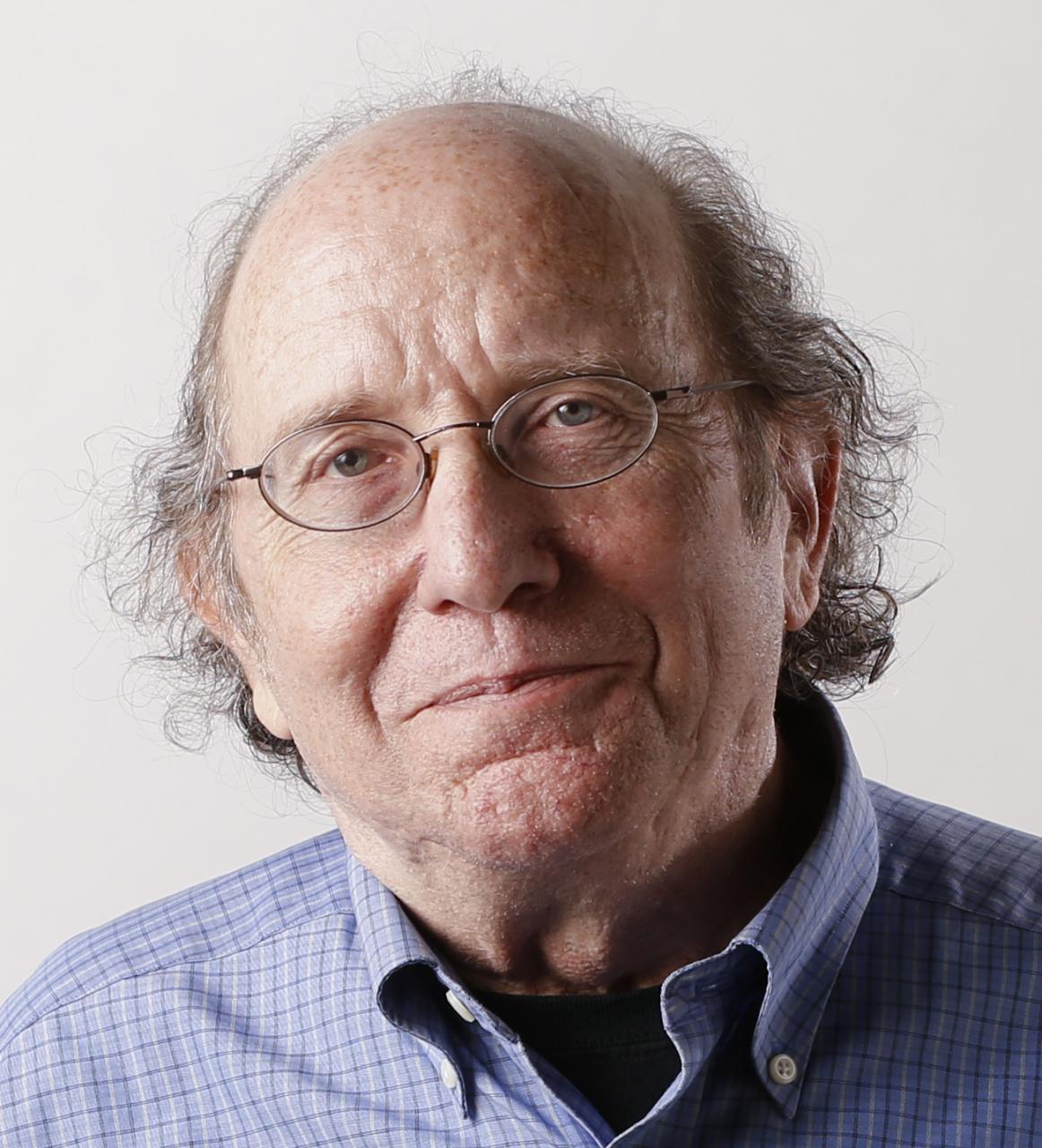 Thomas (Tommy) Goldsmith is a North Carolina-born journalist and musician based in Raleigh. His new book, Earl Scruggs and Foggy Mountain Breakdown: The Making of an American Classic, contains extensive interviews with bluegrass banjo master Scruggs, as well as deep historical research and talks with such acoustic stars as Bela Fleck, Jerry Douglas, Mac Wiseman, and Jesse McReynolds. Remarked Douglas Green,  a well-known music scholar as well as “Ranger Doug“ of Riders in the Sky: “Thoroughly researched, elegantly written, this is a superb study of a tune, a man, and the creation of a highly distinctive American musical style. Loaded with information and interpretation, its warm personable style makes for a compelling and insightful read.”

The author's grounding as a singer, songwriter, guitarist and record producer reaches back to the rootsy, freewheeling scenes in North Carolina, Tennessee and Texas, from the late '60s until 1982. He stayed active in the field after starting a career in daily newspapers in 1983. As a music journalist, he spent seven years covering the Nashville scene at the Tennessean, wrote  for consumer and trade publications including Billboard, the Journal of Country Music, Bluegrass Unlimited, and Country Song Roundup. His book The Bluegrass Reader (University of Illinois) won the International Bluegrass Music Association’s journalist of the year award in 2004.

He retired from the News & Observer in 2016 after 13 years mostly on the news side at the daily, but remains active in writing and playing music.