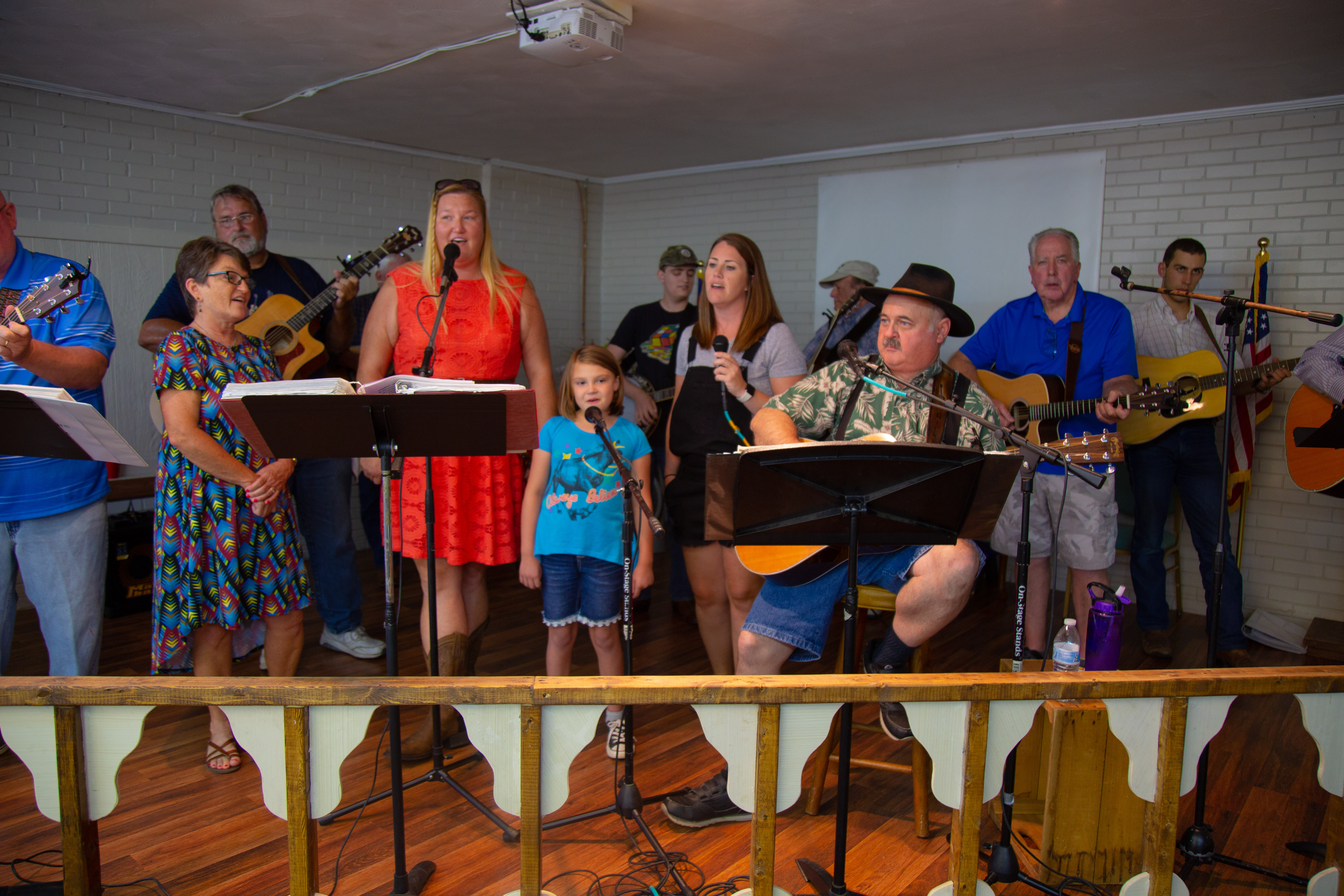 Story and Photographs by Scott Stegall

As you drive south on Landsford Road away from the small town of Marshville, North Carolina the countryside unfolds into acres and acres of pastureland, 19th century farmhouses and weathered barns that together suggest that life moves slowly in Union County.

A little over six miles from town, the road intersects with White Store Road, where a single stoplight and an old country store mark this otherwise quiet landscape. The store has been closed for several years, but the building is home to a weekly bluegrass jam that brings musicians, dancers, and community members together every Tuesday night.

The jam at The Old Hargett Store started nine years ago when the former owner and director of the jam, Jeff Sholar, acted on his father’s advice. “We had a vacant side of our building that was being used for absolutely nothing,” says Jeff. “My dad put a bug in my ear and said, ‘Son, you need to have some music here. You need to bring some life to the store because you can draw music, which will then draw people, which will draw business to the store.’” Jeff was skeptical at first. “I thought my daddy had bumped his head, but as a son, you learn to listen to your daddy. So, I went ahead and followed daddy’s advice and contacted a few musicians.” Some 13 musicians and 10 audience members came out to share songs and stories at the first jam session. Back then, the pickers didn’t have microphones, and if the listeners wanted a seat, they propped themselves on empty produce crates.

The store has seen some major changes since. At the jam on July 10, 2018 over 150 people and 30 musicians celebrated nine continuous years of music and fellowship at Hargett Store. Today large speakers flank a makeshift stage tucked in a corner of the former storeroom, and over 100 chairs fill up the carpeted floor in place of the old metal framed shelves that once brimmed with hunting supplies, fishing tackle, RC-Colas, moon pies, and packs of Marlboro Lights—necessities of life in the Carolina country. The anniversary celebration coincided with the jam’s monthly potluck supper that features homemade dishes cooked and served by members of the community. The promise of cowpeas, buttermilk biscuits, and fried chicken was enough to attract a crowd thirty minutes before the jam even started. “It’s kind of like the Baptist Church,” Jeff jovially observed. “You might not have a lot of folks, but you put some food out there and all of the sudden there’s a lot of people in the pews.” 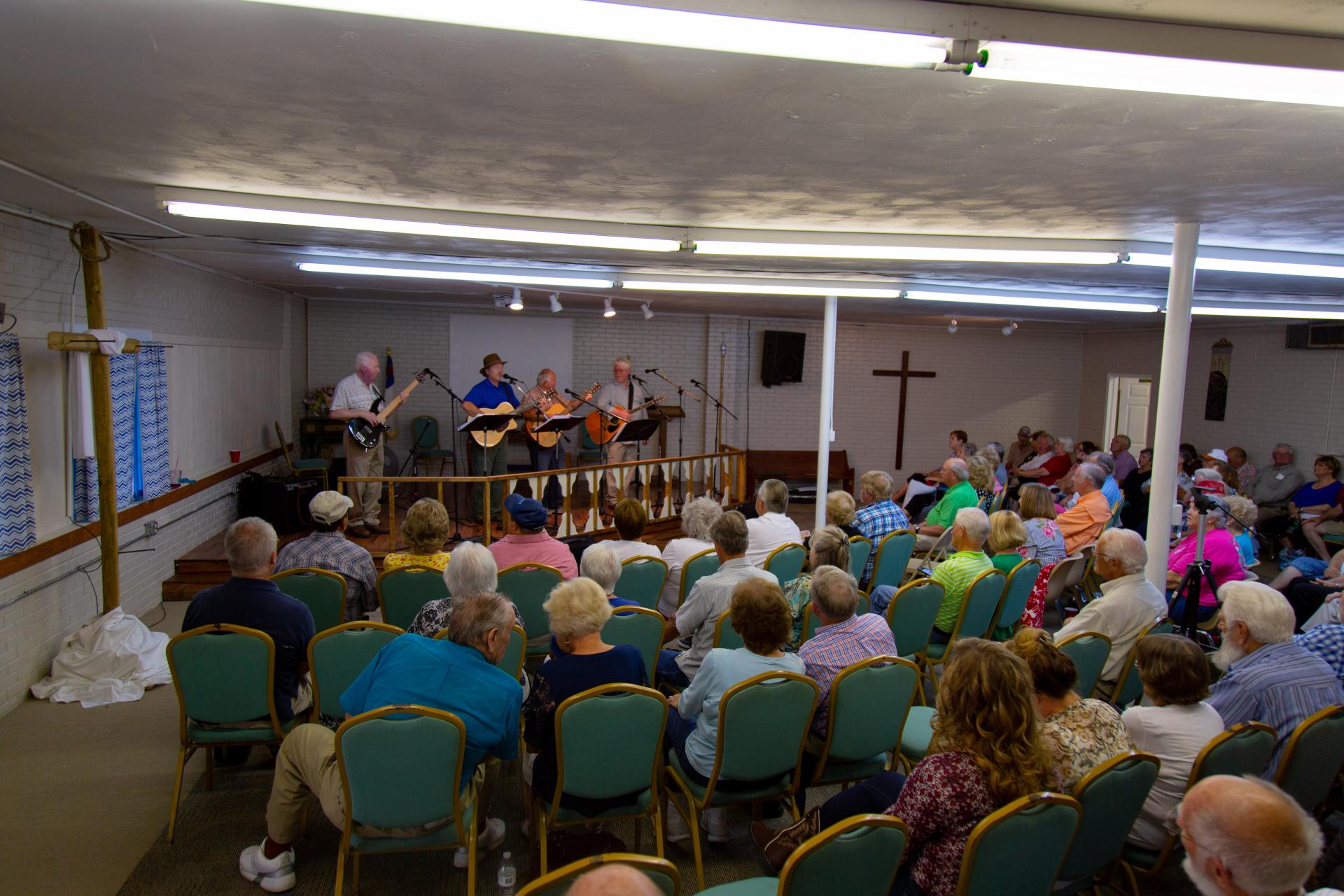 Although the jam is a hub for bluegrass, you can hear various types of music at Hargett Store. “I just think all of us like any of the musics played,” jam regular Diane Drye told me as a singer hit the opening lines of Gordon Lightfoot’s “Early Morning Rain” in the adjacent room. Hargett Store is the rare place where “Foggy Mountain Breakdown,” the spiritual “Precious Lord Take My Hand,” Roger Miller’s “King of the Road,” and Adele’s “Someone Like You” can all be performed in the same night. As the night went on, fiddle and banjo breakdowns like “Old Joe Clark” elicited shouts from listeners and prompted old-timers to knock the dust off their shoes and show off a few clogging steps. When the jammers kicked off a country song, the younger members of the audience set to line dancing. After shedding the newly acquired calories courtesy of Mrs. Diane’s fried chicken and chocolate pound cake, cloggers and line dancers alike made their way to the back of the room where Mrs. Elizabeth Liles (Lib for short) sat eager to serve up a bag of popcorn and “co-colas” in exchange for some light conversation and spare change 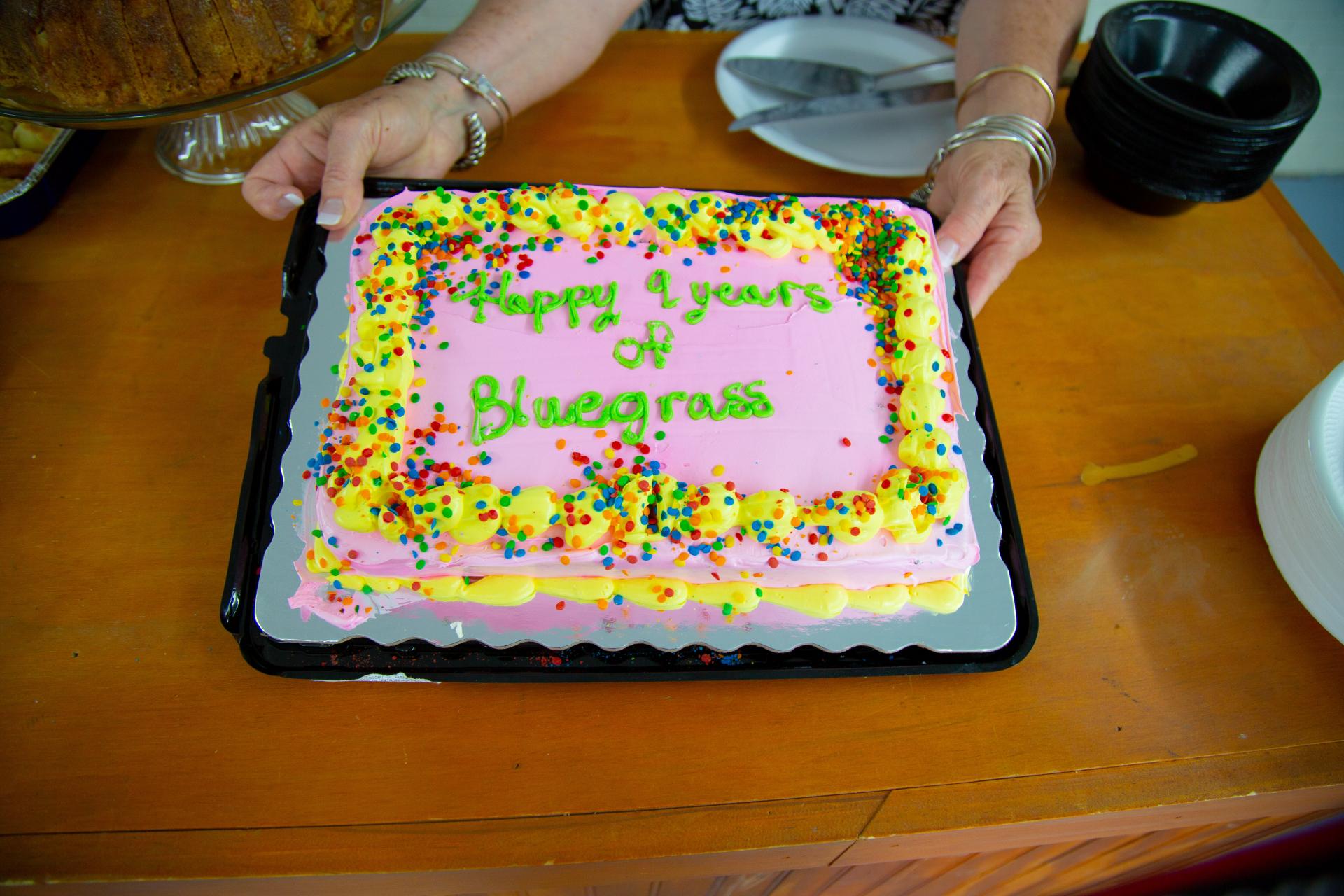 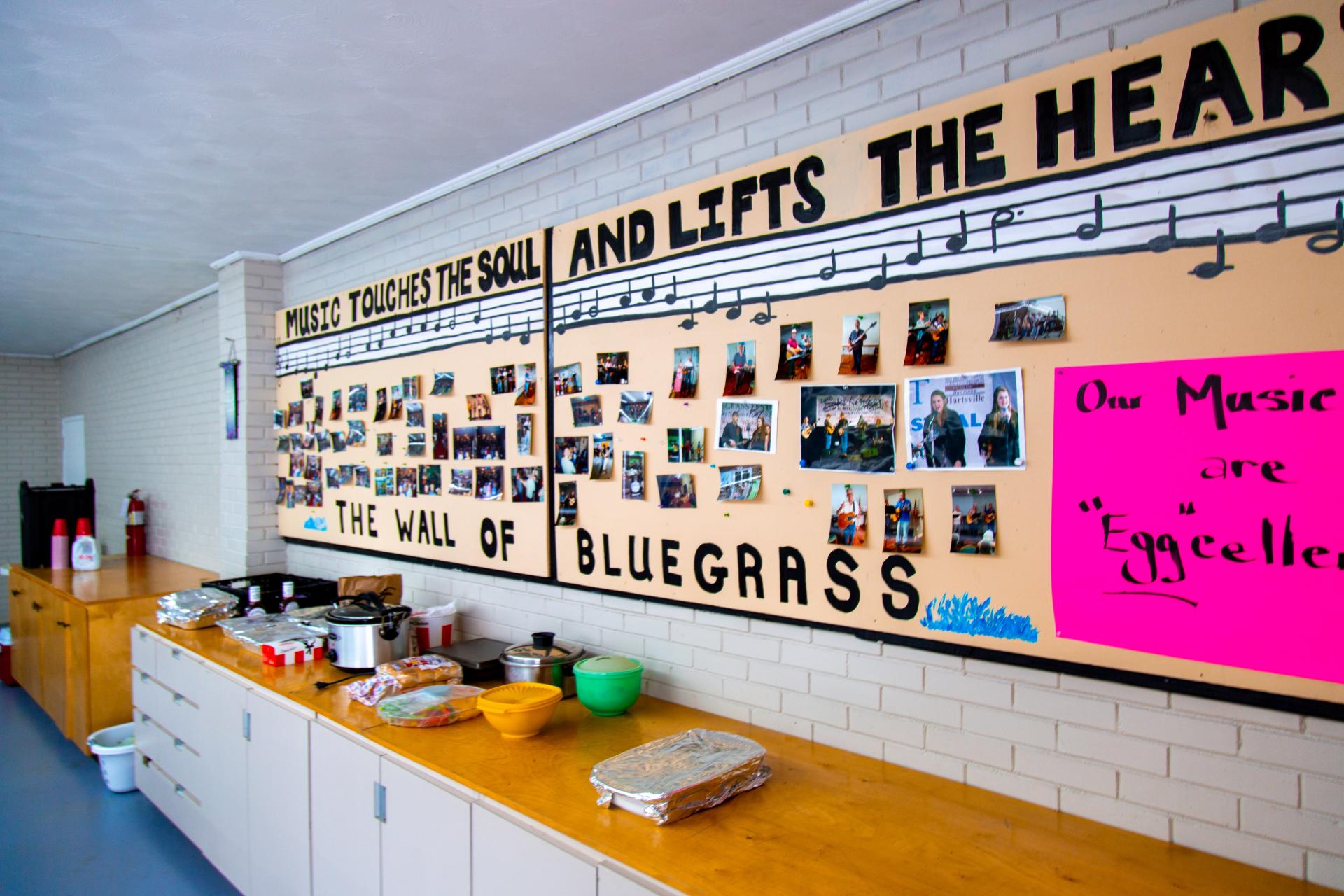 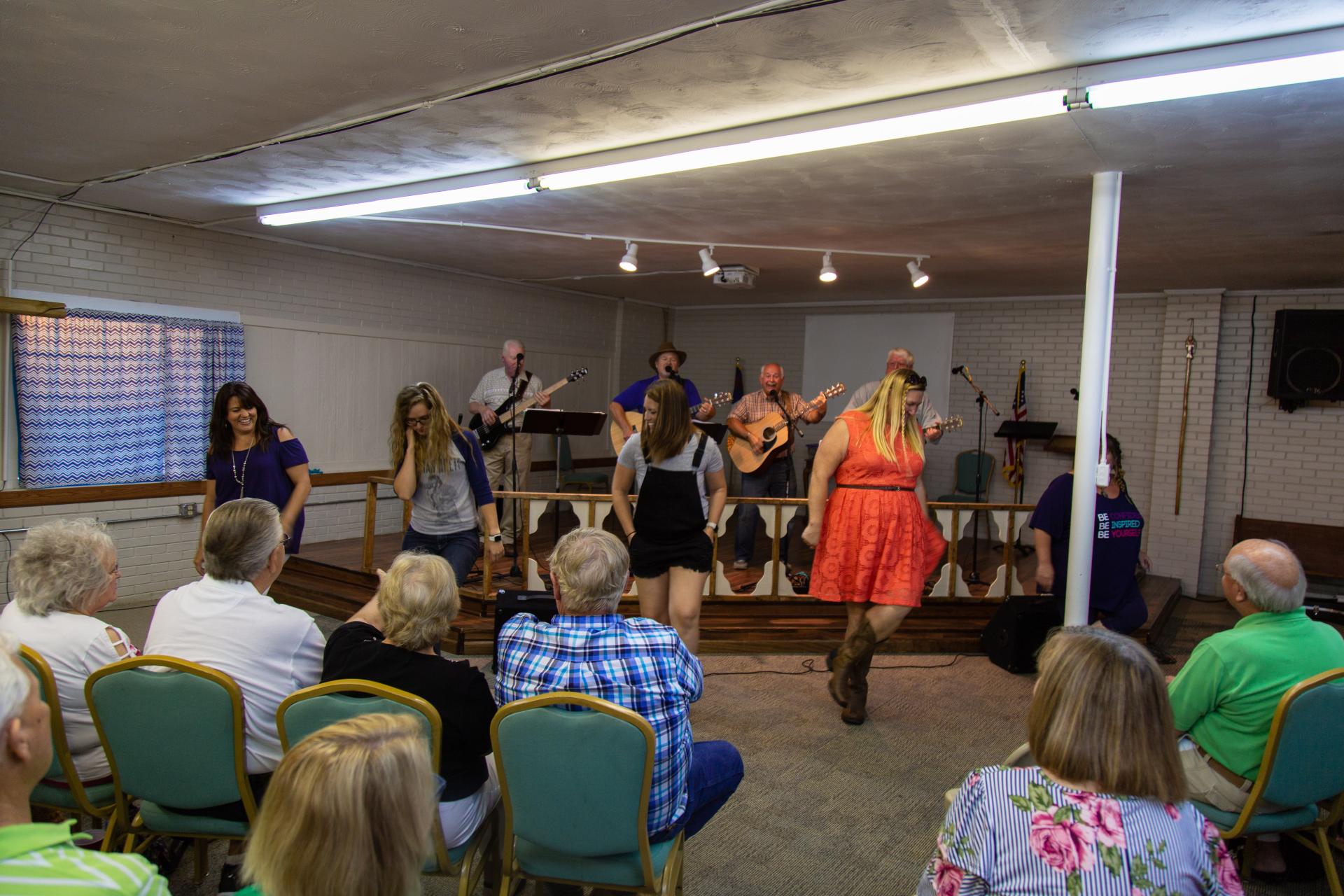 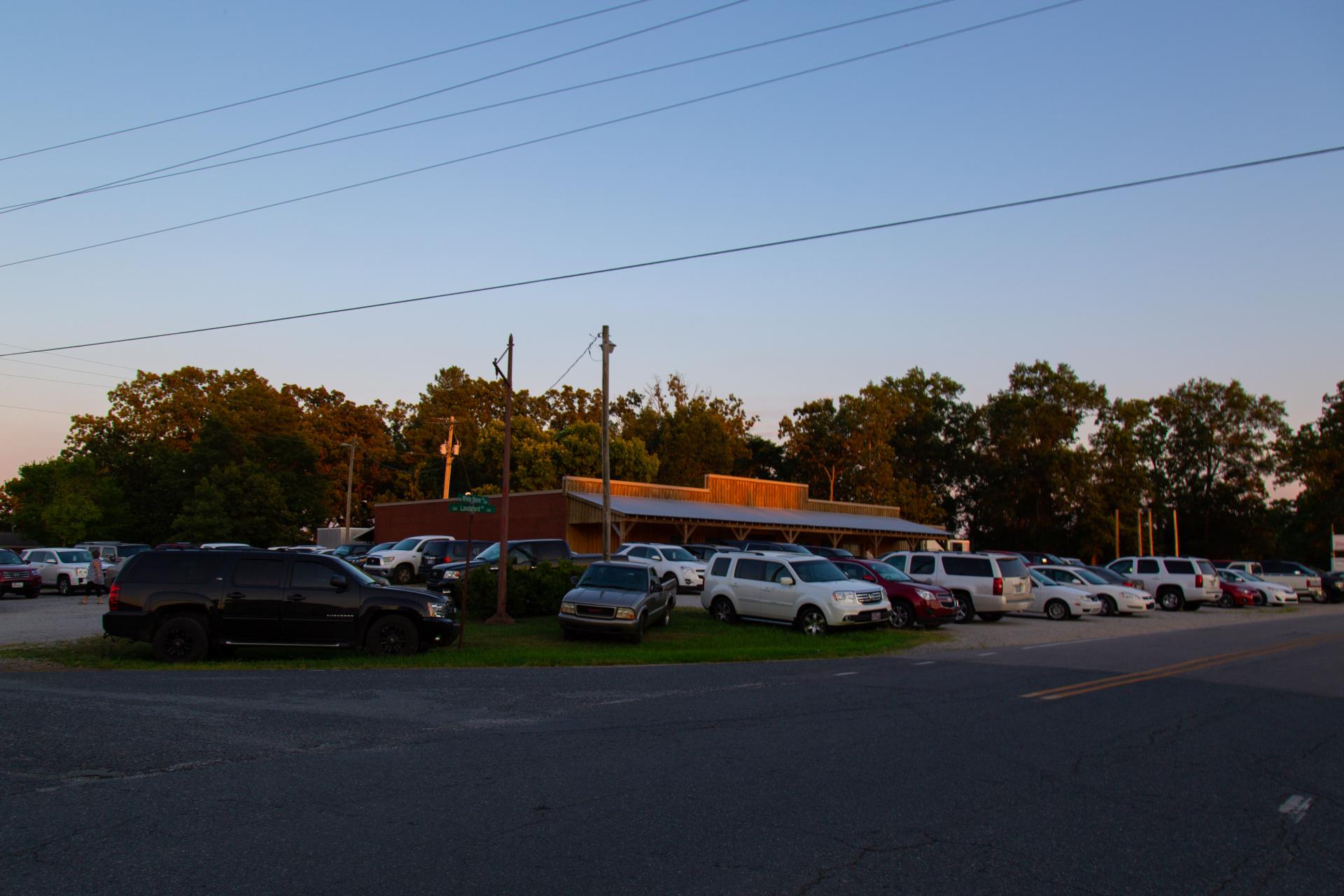 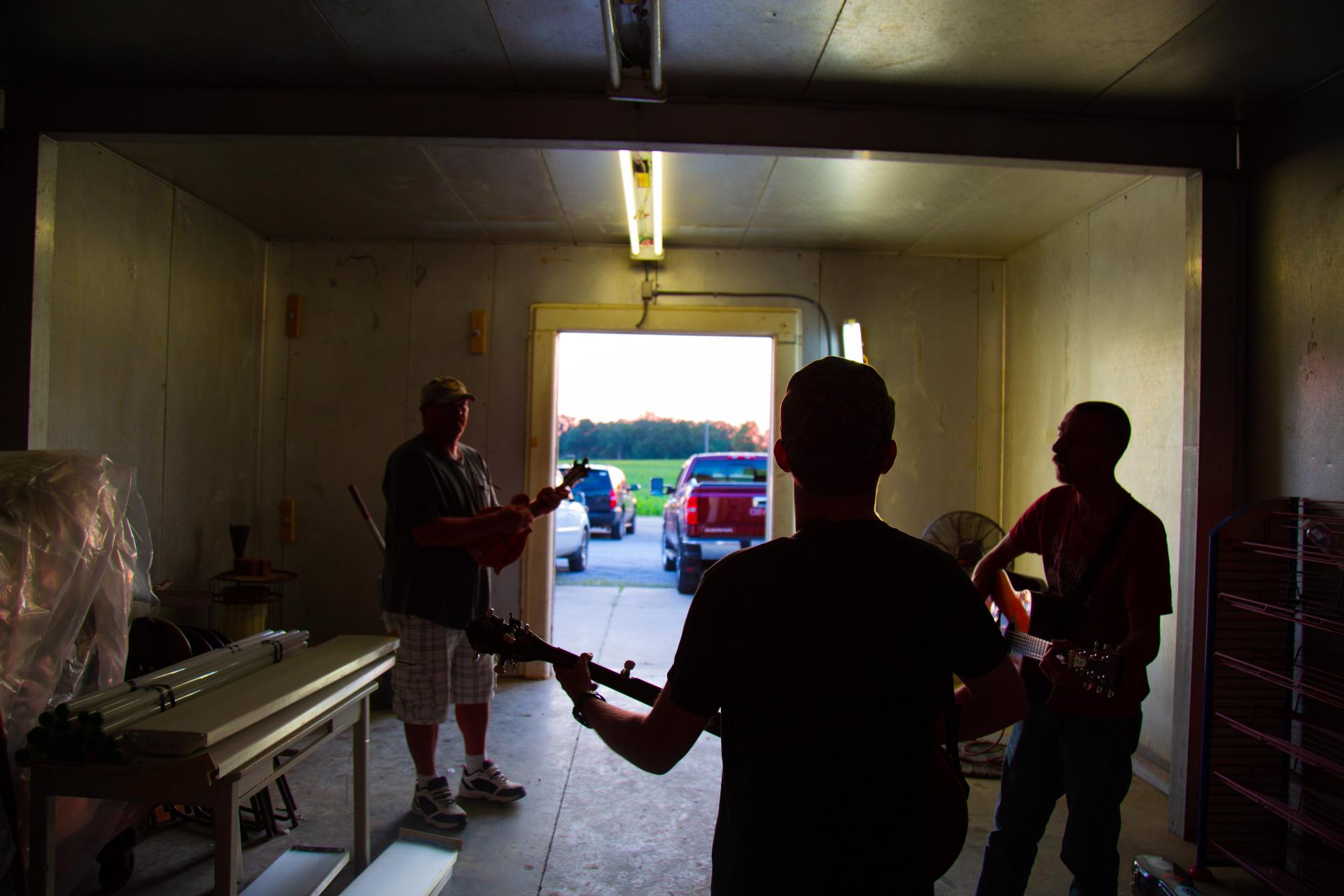 From its humble beginnings, the jam at the Old Hargett Store has grown into a space where people build community through their music, dance, food and stories. “You’re never without a friend when you’re out there,” said Jeff. “If you’ve got things going on in your life you put some prayer requests on it out there. You’ve got people that care about you... I’ve got people that are giving people rides to doctors appointments and bringing over food for people that are sick.” Diane put it another way: “It’s almost like church. We’ve made so many friends.” “Friends and family,” added Lib.

“Yeah, I didn’t know Lib, and we’re from the same place,” said Diane. “Now, she’s just one of my dearest friends.”

“It’s just like one big family sure enough though,” Lib said in a drawl as rich as her homemade strawberry delight. “Maybe not direct kin, but we just love on everybody, and everybody loves on us. It’s just beautiful out there, absolutely beautiful, tonight especially. It’s something to be proud of. Nine years and going strong.” 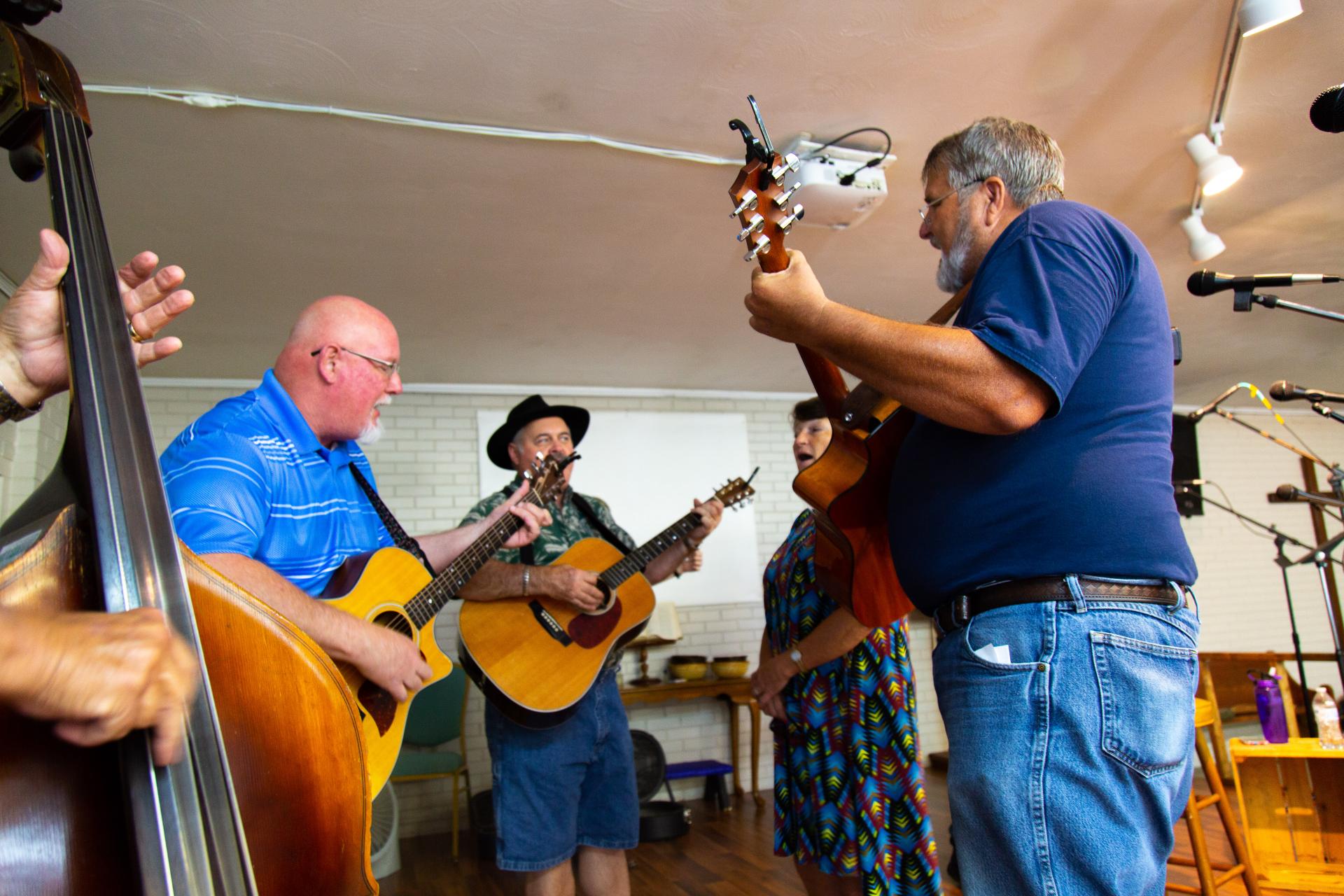 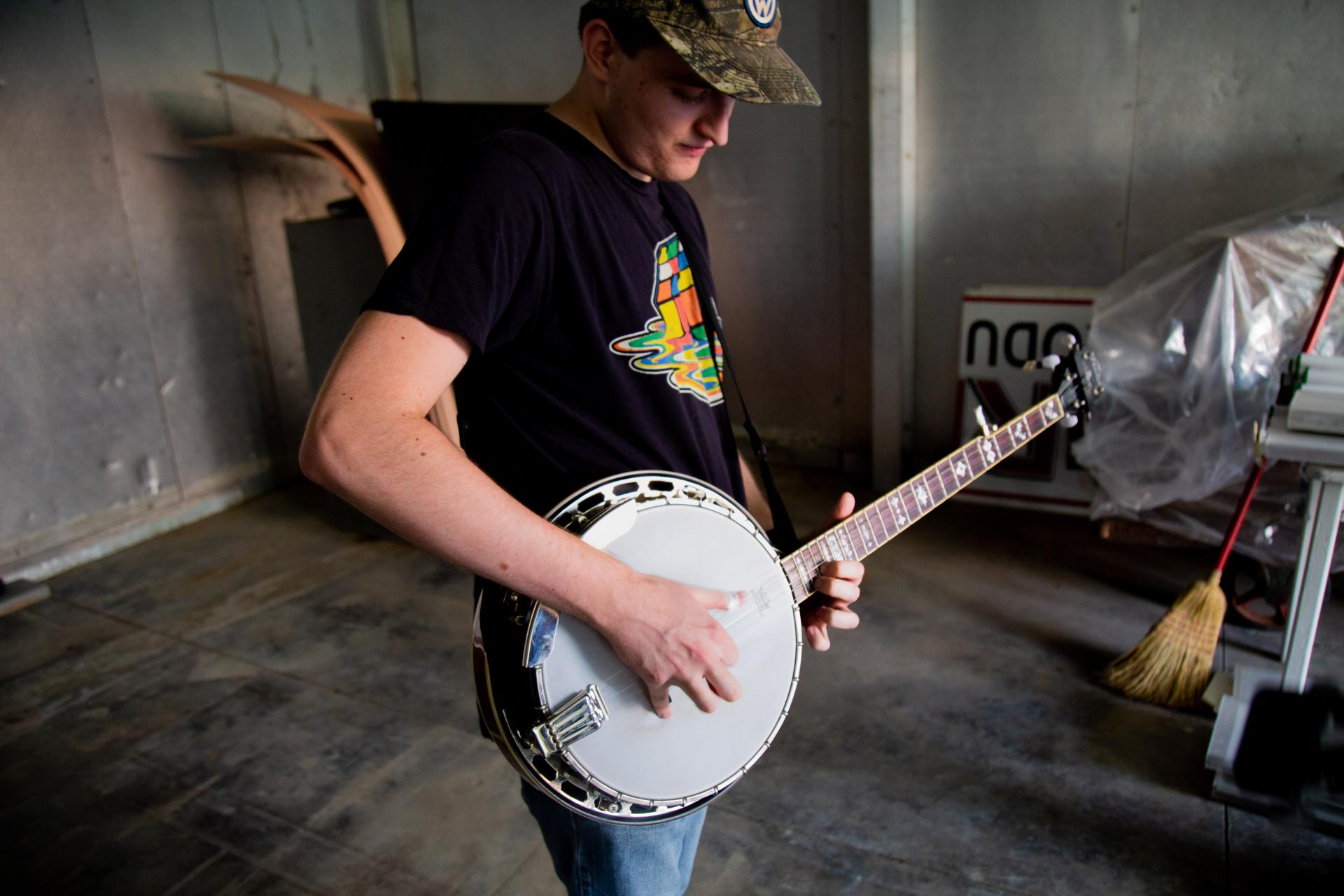 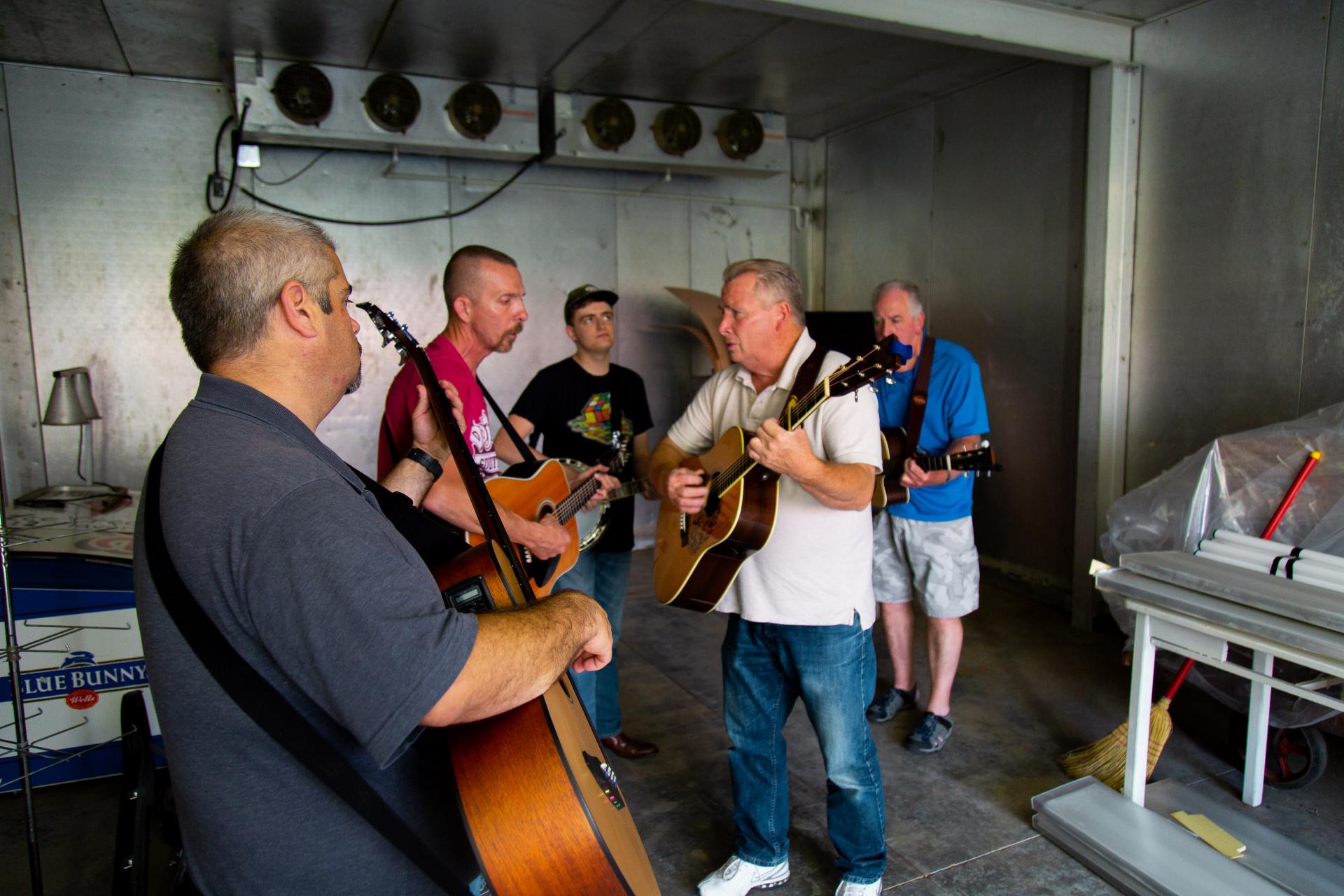 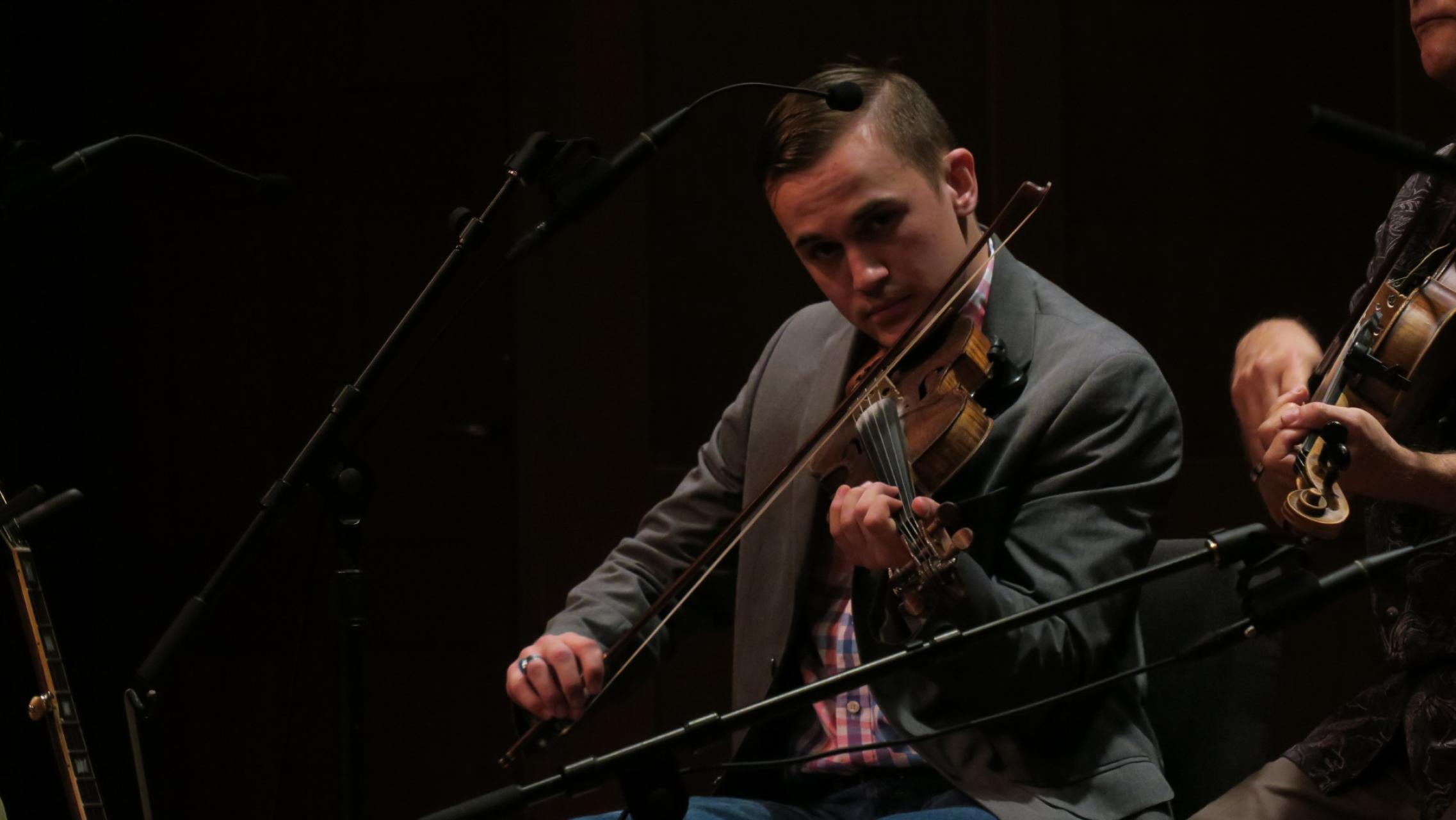 Scott Stegall is a junior History and Music major at Davidson College. Born in Monroe, North Carolina, Scott grew up around bluegrass and old-time music. Watching reruns of the Grand Ole Opry with his grandfather inspired Scott to pick up the banjo at age thirteen. Since then, he has taken up fiddle, guitar, mandolin, and bass. He's performed with various bluegrass and country bands including Stonewashed, the Catawba Riverkings, and Red Clay Revival. With the help of Davidson College and the North Carolina Arts Council, Scott has conducted fieldwork with and learned from some of the best traditional musicians in the Carolina Piedmont including fiddler Junior Harris and banjo players Clint Barwick and Marvin Gaster