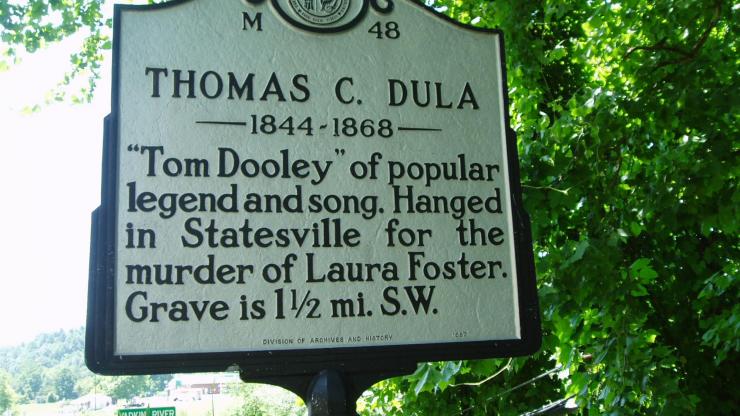 Department of Natural and Cultural Resources

The Legend Behind North Carolina’s Most Famous Murder Ballad

In 1868 a man named Tom Dula (pronounced Dooley) was hanged in Statesville, N.C. after being convicted of murdering his lover, Laura Foster, in 1866.

The execution wasn’t the end of Tom Dula’s story. For generations rumors, conspiracies, and a hit song have swirled around the crime and its fallout.

In the spring of 1866, Laura Foster’s body was found in a shallow grave days after she’d been stabbed in the chest. Dula was arrested in Tennessee and returned to North Carolina for trial. His highly publicized case was tried, convicted, temporarily overturned, and ultimately upheld.

Legend has it that the actual perpetrator of the murder was Dula’s other lover Ann Melton.

The mythology around Tom Dula’s story reached new heights in 1958 when The Kingston Trio recorded and released to great critical and commercial success “Tom Dooley,” a traditional murder ballad about the incident.

Now a part of the canon of American folk music, the recording of “Tom Dooley” that started it all was captured by Frank and Anne Warner, two song-collectors who recorded a carpenter named Frank Proffitt singing the song in Beech Mountain, N.C. in 1938. Many have gone on to record and cover the murder ballad, including North Carolina flatpicking legend Doc Watson, who released his version in 1964.

In a poignant twist of music and historic lore, Doc Watson’s great grandmother allegedly heard Ann Melton confess to the murder on her deathbed in 1874.