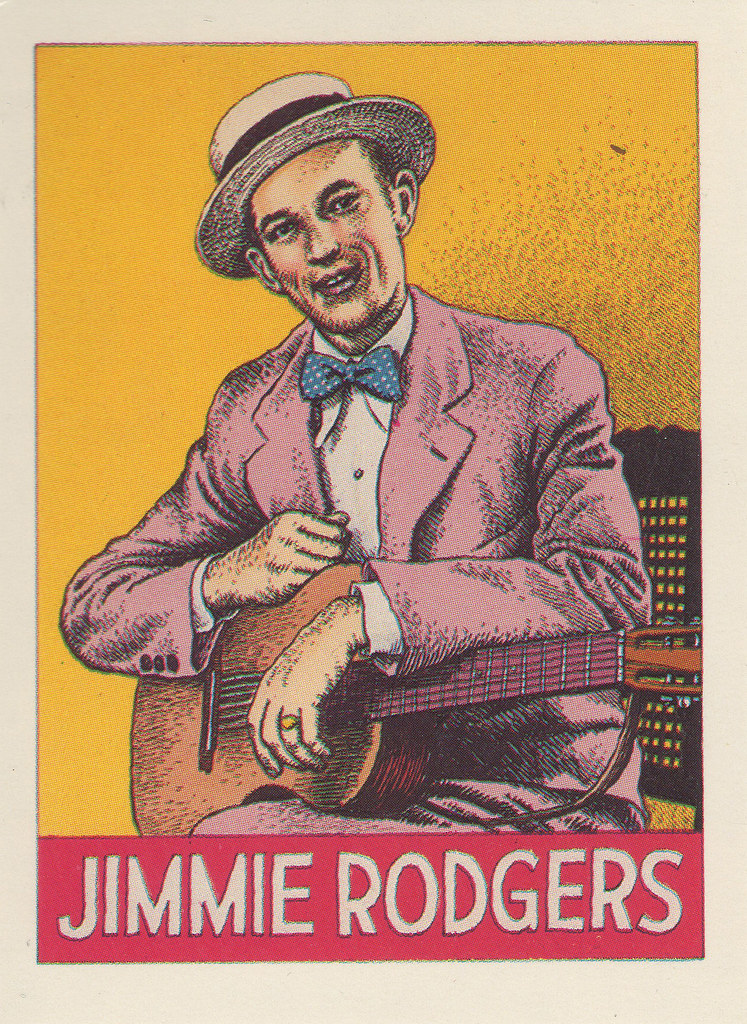 Today marks 86 years since Jimmie Rodgers passed away at the age of 35. Nicknamed "The Singing Brakeman", "The Blue Yodeller", and "The Father of Country Music", Jimmie Rodgers' music career kicked off with a weekly radio show on Asheville's WWNC. When the Country Music Hall of Fame was established in 1961, Jimmie Rodgers was among the first three people to be inducted.

Below, you'll find an essay from the North Carolina Highway Historical Marker Program commemorating his road sign, casted in 2013.

The influence of Jimmie Rodgers on country music was considerable and many argue that he was the most important artist of the genre. Modern-day performers from Bob Dylan to Dolly Parton count him as an influence. He is known as the “Singing Brakeman,” the “Blue Yodeler,” and the “Father of Country Music.” Born James Charles Rodgers near Meridian, Mississippi, in 1897, Jimmie Rodgers took his first railroad job at thirteen working as a waterboy alongside his father. Rodgers developed a distinctive vocal style and incorporated yodeling into most of his songs.

By March 1927 Jimmie Rodgers had moved to Asheville, following a friend who worked for the Southern Railway. He lived for a while in the Western Hotel, then in a furnished cabin behind Pisgah View Apartments on Patton Avenue, and in a fire station at Bartlett and Depot in the present River Arts District. He worked as a janitor, cab driver, and city detective, alongside Fred Jones, chief of detectives.

Most importantly, he launched his music career with appearances on WWNC radio beginning on April 18, 1927. Rodgers and his friend Otis Kuykendall played live weekly on WWNC, in time adding other musicians billed as the Tenneva Ramblers and later as the Jimmie Rodgers Entertainers. Rodgers travelled to Johnson City, Tennessee, on April 24 to play at a Rotary convention. Their initial appearances were sketchy. In Hendersonville only a housekeeper was present for the show. They did better at Marion on June 27 when they played the North Fork Mountain Resort.

WWNC, like Charlotte’s WBT and Raleigh’s WPTF, featured live old-time musicians. The station took to the air on February 2, 1927, with dance music from the George Vanderbilt Hotel (today the Vanderbilt Apartments) across from the Battery Park Hotel. The studio and transmitter were on the top floor of the nearby Flat Iron Building. Rodgers and company appeared on WWNC until June 1927.

On August 4, upon producer Ralph Peer’s invitation, he recorded his first two tracks, “The Soldier’s Sweetheart” and “Sleep, Baby, Sleep,” at the Bristol sessions in the town of that name that bestrides the Tennessee/Virginia line. The Carter Family made their first recordings that same week and the sessions are known as the “Big Bang of Country Music.” In December 1929, post-success, Rodgers returned to Asheville and handbills touted him as “Asheville’s Own.” He was diagnosed with tuberculosis in 1924 and it killed him in 1933.