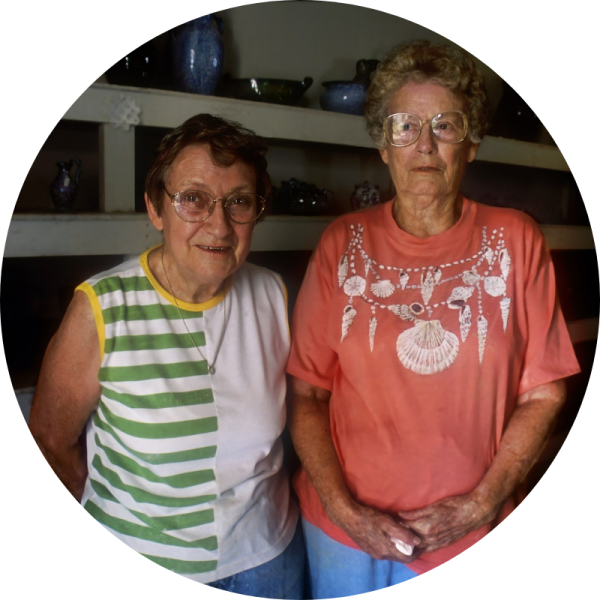 Pottery made by Neolia Cole Womack and Celia Cole Perkinson reveals a flair that has come to characterize their branch of the Coles, one of North Carolina’s oldest pottery-making families.  Both sisters started turning when they were young children, literally growing up in their father’s shop.  After more than six decades of making pots, their work still shows their creative edge.

Celia and Neolia Cole were two of the seven children born to Arthur R. and Pauline Cole.  “He brought out his first kiln of pottery on the first day of December 1927, and that’s the morning I was born,” says Neolia.  Seven years later, A.R. moved the family pottery from Randolph County to Sanford, where he opened Rainbow Pottery on Route 1, then the main north/south highway on the Eastern Seaboard.

From Rainbow Pottery’s earliest days, Celia and Neolia were carrying bisque ware, helping unload the kilns, and dipping pots in their father’s increasingly colorful vats of glaze.  “If there was anything you were big enough to do, you did it,” says Neolia.  She recalls how each child began learning by turning small pieces.  As they graduated to the wheel, they moved on to larger wares.  By the late 1930s, Celia and Neolia were accomplished turners and were contributing the to the shop’s output.  When their father died in 1974, they took over the operation.  They have kept it going, rebuilding twice, most recently in 1992 after the pottery burned to the ground.

Celia and Neolia are known both for their creativity and for their deep roots in tradition.  Many aspects of Cole’s Pottery remain precisely as they were in the 1930s.  Their clay comes from a vein near Smithfield that they have used since the move to Sanford.  They continue to offer a startling array of glazes, and still specialize in the “rainbow” styling that gave their shop its first name.  And they maintain the creative variety of forms that has come to characterize the family tradition.

While many of their pieces have precedents in earlier Cole creations, Neolia and Celia continue to innovate.  As Neolia explains, “If you keep doing the same thing, your customers will get bored.  And—more importantly—you’ll get bored.”  Since 1983, their wares have included short messages, handwritten by Neolia.  They may commemorate a special occasion, report the weather, comment on a current event, or simply remind you to “Have a nice day!”  Celia is noted for her miniature reproductions of full-sized Cole pots, pitchers, and jars.  Turned on the wheel like larger pots, the miniatures often stand no more than a centimeter high, yet they retain both elegance and proportion.  To her fellow potters, Celia’s miniatures are one more indication of the artistry that for so long has marked production at Cole’s Pottery.

Fifth generation potters themselves, Celia Cole Perkinson and Neolia Cole Womack have had the pleasure of seeing their work continue in yet another generation.  Neolia’s grandson, Kenneth George, who says he has learned “by watching and imitating,” is working alongside them.  He is producing pieces that clearly fall in the Cole tradition, and he is learning the business of pottery as well.  All three are advocates for keeping their wares affordable.  “Like daddy always said,” declares Neolia, “‘I’d rather have a bunch of fast nickels rolling in than one slow dime.’”