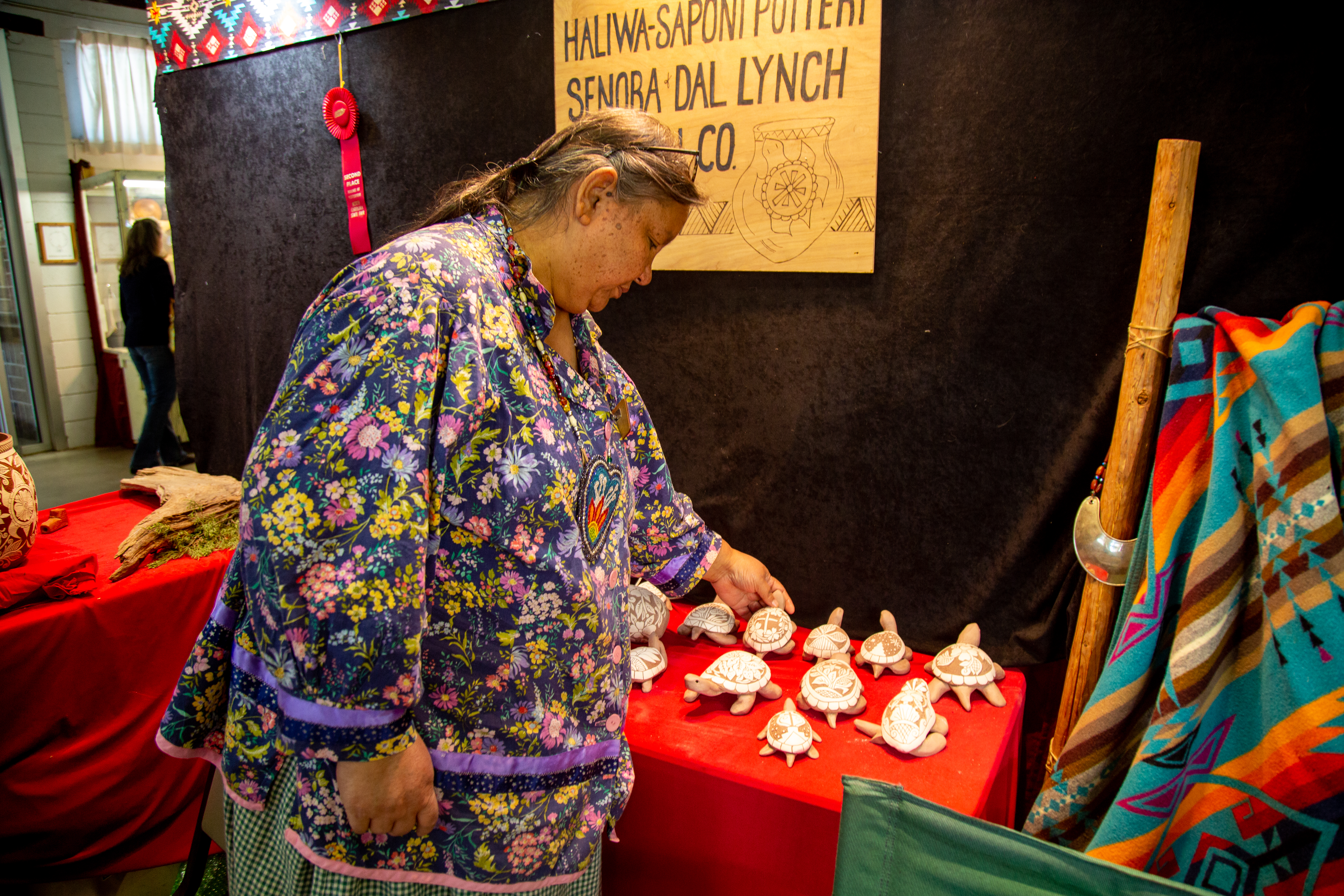 Story and photos by Kyesha Jennings

North Carolina is home to the largest Native American population east of the Mississippi River. Of the 600 Native American tribes in the United States, eight are here: the Eastern Band of Cherokee Indians, the Coharie Tribe, the Lumbee Tribe of North Carolina, the Haliwa-Saponi, the Sappony, the Meherrin Indian Tribe, the Occaneechi Band of the Saponi Nation, and the Waccamaw-Siouan Tribe. Each tribe has its own unique language, foods, dances, songs, stories, and beliefs.

November is national Native American Heritage Month, and as part of the North Carolina Arts Council’s recognition of these tribes’ gifts to the state’s cultural life, we turned to the celebrated potter Senora Richardson Lynch. The 2007 N.C. Heritage Award winner is a member of the Haliwa-Saponi. With affection, she referred to her pottery as a living tradition. She said, “My artwork is inspired by the stories that I heard growing up. A lot of our historical stories were lost, or tucked away, as we like to say. We started reviving our pottery in the seventies.” That’s when, as a teenager, Senora became interested in pottery. She had seen and admired ancient pottery shards, and when she had the chance to work with her Haliwa-Saponi tribal elders in a pottery class, she took it.

Now Senora Lynch’s fame as a potter reaches far beyond the borders of her tribe and state. She has earned the respect of her fellow Indian artists for the strength and form of her pots, and for the exquisite designs that she etches on their surfaces. In Washington, D.C., Senora’s pottery has been displayed at the National Museum of Women in the Arts and is in the permanent collection of the Smithsonian’s National Museum of the American Indian. In North Carolina, she has work on permanent display at the Museum of History, in Raleigh, Her 2007 North Carolina Heritage Award honored her work in promoting and preserving the culture of the Haliwa-Saponi people, as did the Lifetime Achievement Award she received at the River People Music and Culture Fest, in Pembroke, in 2013. 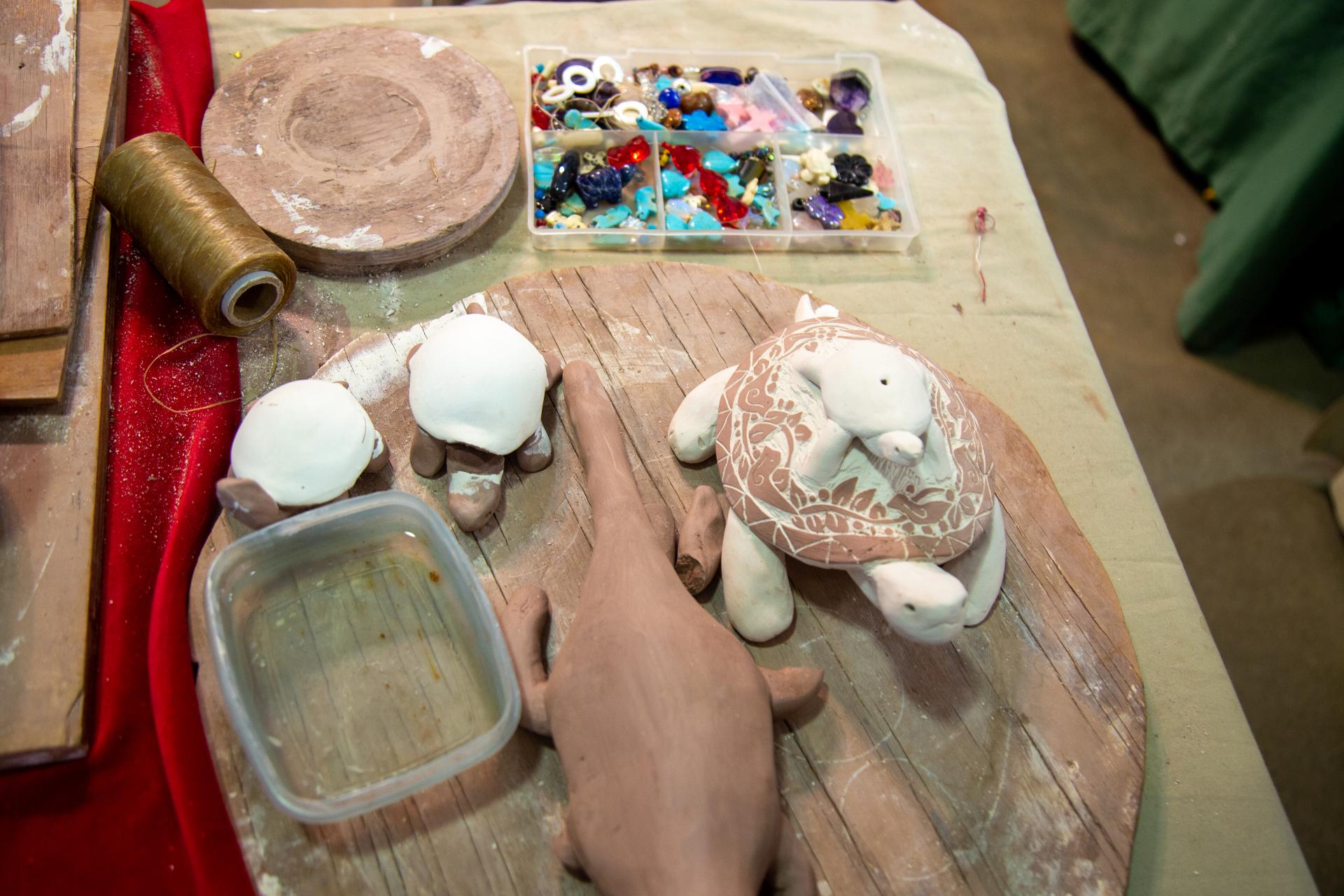 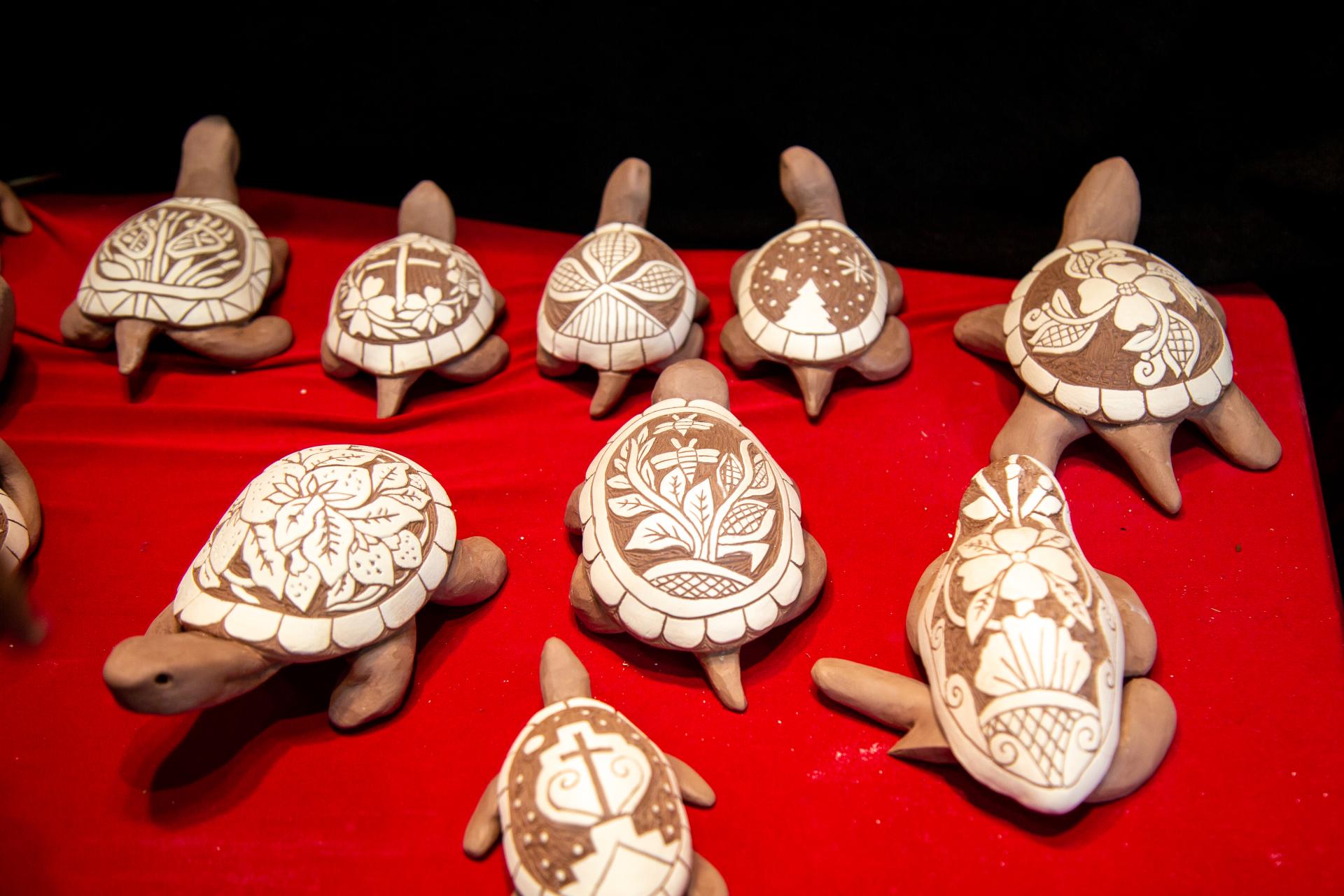 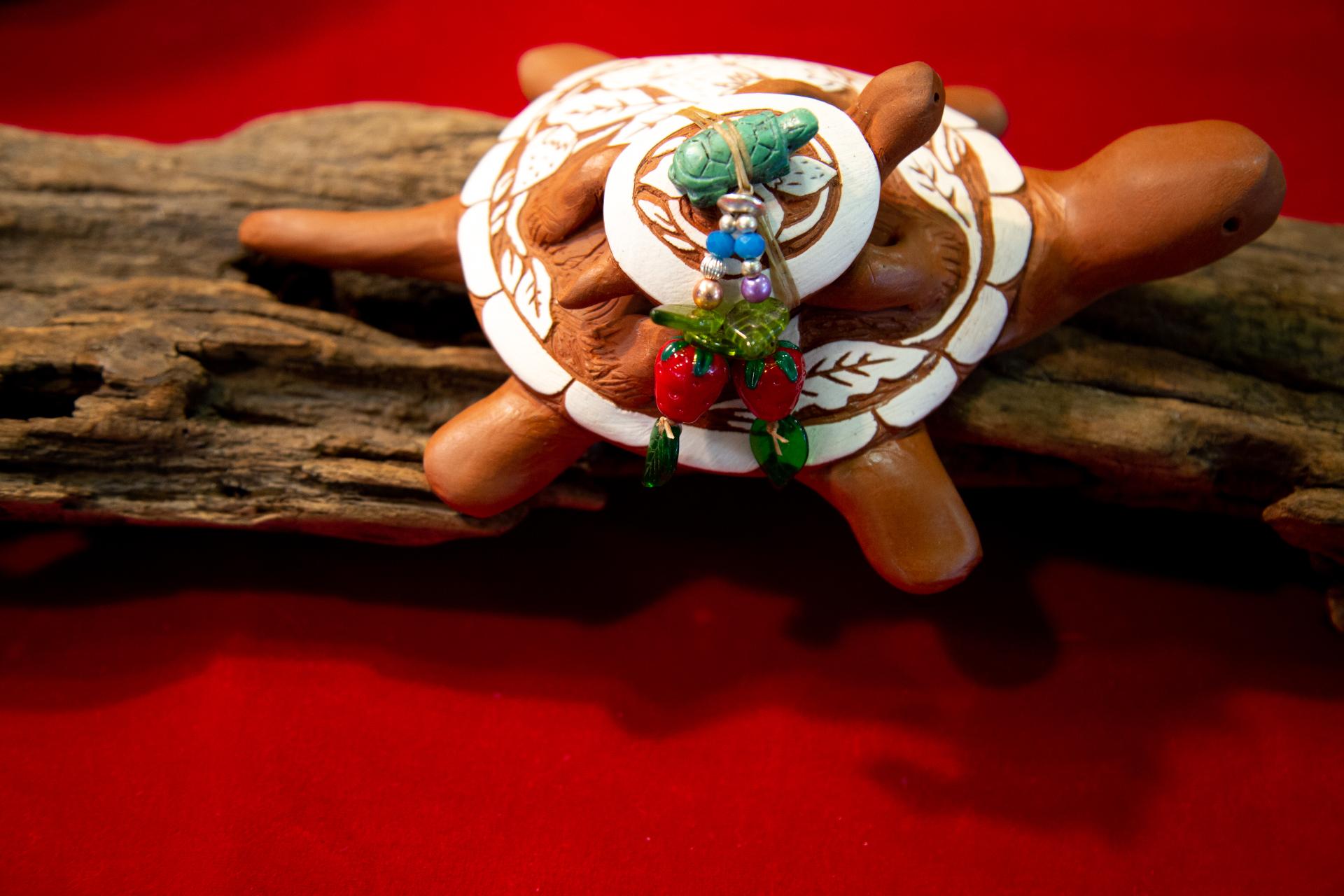 Long ago, she decided that all of her artwork would depict what she had grown up with. She began to think about the importance of animals, such as birds, turtles, and deer. Their connection to the earth, the land, and the plants inspired her to carve images of them into her pottery.

When I visited Senora at the N.C. State Fair’s Village of Yesteryear exhibition, where more than 75 artists and crafters create, display, and sell time-honored handmade work, she talked about the variety and meaning of her designs.

“The one with the tobacco on it means friendship and unity. We use tobacco in our ceremonies and we also use it in our prayers,” she told me. “I might do another one with tobacco, but it’s never going to be the same, because each one is individually made.”

Our conversation was briefly paused so that Senora could attend to customers. At that moment, her popular small turtles were sold out. After explaining that each piece of pottery left on the table was already accounted for, Senora continued to explain the meanings of her designs. “Some of them have birds on there, which means to speak good words and say good things to other people. Because the birds bring us music and joy, they're very important animals. Our people would always say that they would follow the birds, and if they can eat the food, we can eat the food. There’s so much more to it than just being a bird—it means something,” she shared.

Senora’s artistic talents extend to beadwork, leatherwork, basket-making, and even making moccasins—the footwear of many indigenous North American people. She was wearing a beautiful strand of beads, and when I asked about those, she said she had taught her daughter beadwork at the age of three, and that the beads were her daughter’s creation. 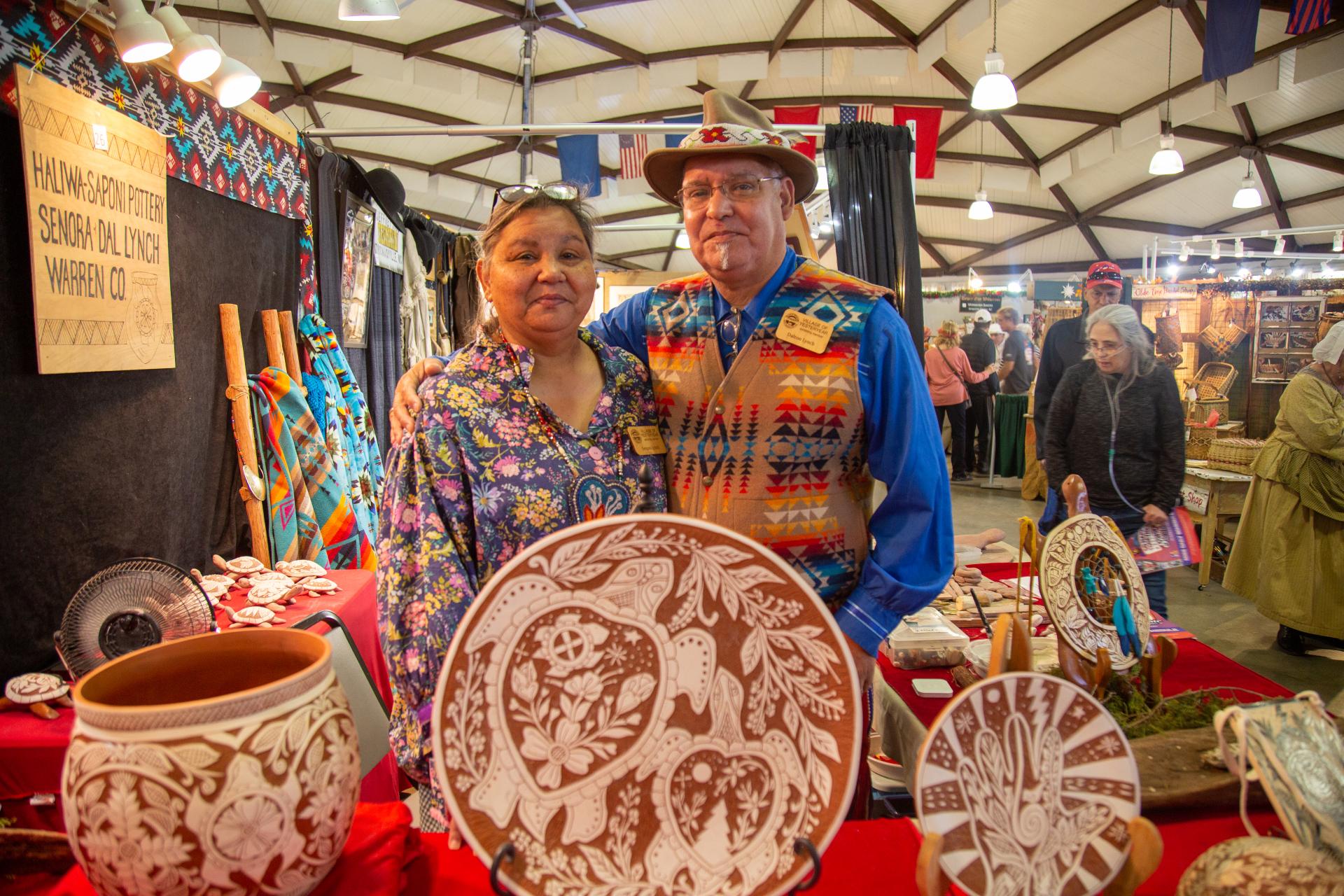 For Native American Heritage Month this year, many schools have invited Senora to talk to students about Indian culture, the Haliwa-Saponi, and the other Native American peoples of the northeastern Piedmont region of the state. “I think I've been called more this time than I’ve ever been called before,” she said with excitement.

When asked what this month means to her, Senora said, “We're honored that people are now respecting and honoring the Native Americans. You know, we are the indigenous people, the first people of this land. Everybody's living on the land of my ancestors. And so I always say that we're walking on arrowheads of my people. They’re underneath our feet, so they're holding us up.” 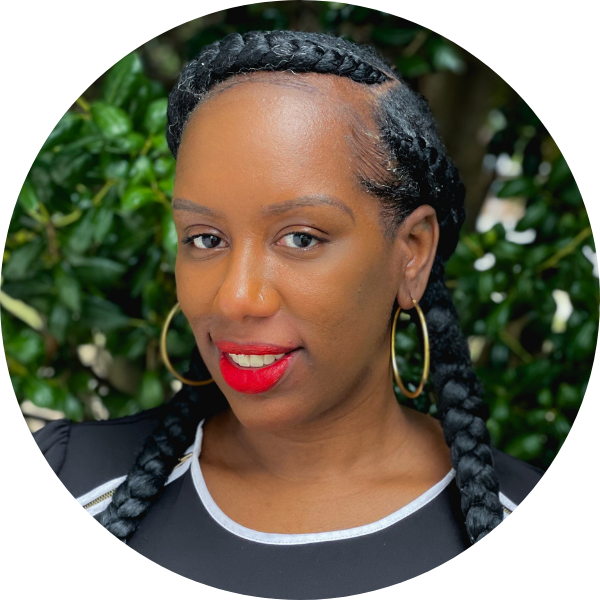