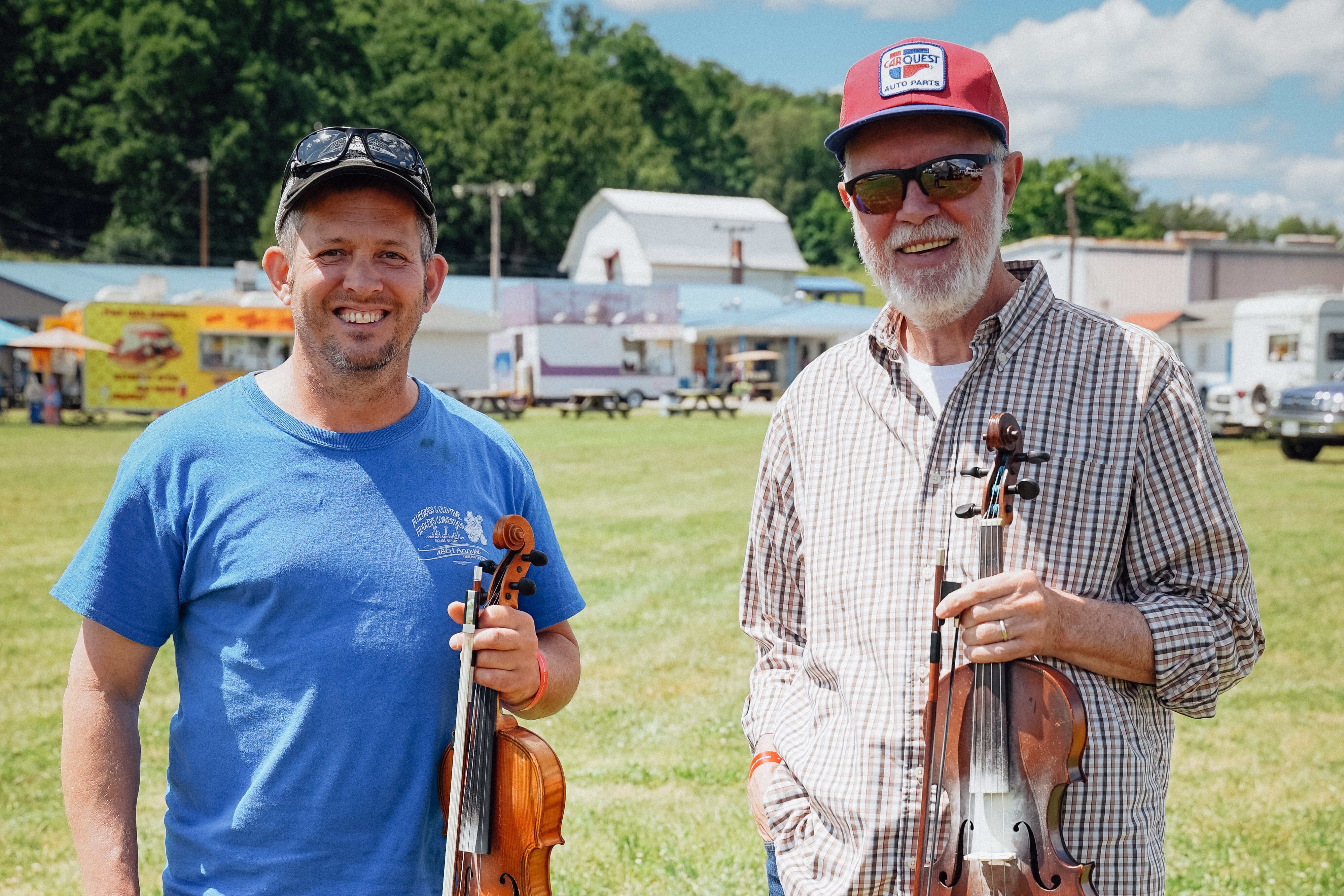 Richard Bowman, of Mount Airy, will mentor Chad Ritchie, of Taylorsville, in the old-time fiddle tunes he learned from his community in southwestern Virginia and the Round Peak area of North Carolina. Among a shrinking number of his generation who grew up immersed in his region’s music culture, Bowman is a highly regarded old-time and dance fiddler with first-place awards both in individual and band competitions at fiddlers’ conventions such as those at Galax, Mt. Airy, and Fiddlers Grove. His band, the Slate Mountain Ramblers, has been a mainstay of North Carolina’s old-time dance and festival culture for three decades. His apprentice, Chad Ritchie, was raised in a family of bluegrass musicians and founded the Alexander Junior Appalachian Musician program in 2016 to teach old-time music to school-age children in his community. Bowman will teach in the traditional way that he learned: by ear, knee-to-knee, at full speed. Of Ritchie, Bowman says: “I can tell he is serious about learning and trust he will preserve this music and the tradition of sharing it as it was shared with me.”

Luthier and old-time musician Joe Thrift, of Elkin, will mentor Ben Masterson, of Winston-Salem, and Kelly Sivy, of Elkin, in instrument-building and the old-time music tradition of the Round Peak/Surry County region. Thrift was raised in a family of instrument-builders and church musicians in Winston Salem, North Carolina. He was introduced to old-time music and violin-making by local luthiers such as Dave Sturgill and Albert Hash, and continued his study of the craft in England. He is one of the few modern fiddlers whose original compositions have entered the old-time repertoire. Sivy, who relocated to North Carolina from Fairbanks, AK, to become a luthier, and Masterson, who works as a public historian and traditional woodworker at Old Salem Museums & Gardens, sought out Thrift’s mentorship and quickly became committed students. The trio will train in traditional hand tool techniques used for the most popular instruments played by folk musicians today, and will document Thrift’s personal stories of the Surry County region and its music culture. About entering the communities of traditional music and craftsmanship, Sivy says: “What I appreciate most of all in these pursuits is the culture of mentorship between individuals, within families, and across generations, which has resulted in the emergence, and, with luck, preservation, of centuries-long traditions.”

Josh Goforth, of Marshall, will mentor Tim McWilliams, of Asheville, in the traditional music of the Madison and Buncombe county region. Raised in a family that maintained singing and fiddle tunes as part of the rhythm of everyday life, Goforth is a respected teacher and performer of ballads, shape-note songs, storytelling, banjo, fiddle, mandolin, guitar, and bass. Tim McWilliams will focus on the guitar and banjo styles of Madison and Buncombe Counties and the music of Byard Ray, Marcus Martin, the Freeman family, Lee Wallin, Jerry Adams, and Dale McCoy. Goforth knew these people personally and McWilliams hopes to root his own style and teaching in their unique styles. McWilliams is a music teacher himself and a descendant of Appalachian out-migrants. He says, “To achieve my goals of becoming a resource in my community, a tradition bearer, and a teacher that aspiring musicians can come to in order to gain a complete understanding of the traditional music of Appalachia, I have to learn at the feet of a master.”

Luthier James Condino, of Asheville, will mentor Zach Dease, of Advance, in the traditional crafting of stringed instruments, particularly guitars. Together they will focus on using locally sourced North Carolina wood in response to the growing unsustainability of the global wood market on which the luthier craft relies. Raised in a family of builders and makers, Condino has been making instruments for more than 40 years. He began mentoring Dease in 2016. Dease hopes to hone his guitar-building skill in service to his community and congregation in Davie County, where he is a minister in the Moravian church, a denomination with deep historical and cultural ties to the Winston-Salem area. “Guitar- building helps me express my faith,” Dease says. “Most of the guitars I have built and am currently building have been for Moravians. Each guitar lays the foundation for connections to new people, thus introducing them not only to me, but also to this regional art form.”

The N.C. Appalachian Folklife Apprenticeships program, launched in 2019, supports 12-month apprenticeships in the folk and traditional arts of the many cultural communities within the state’s Appalachian Regional Commission counties. South Arts funds the program through its In These Mountains: Central Appalachian Folk Arts & Culture Initiative.

Mentor artists are tradition-bearers committed to the perpetuation of a traditional art form or practice of their cultural heritage. Mentor artists are recognized by fellow artists and their own community members as skilled and dedicated practitioners. Apprentices are dedicated students whom mentor artists have chosen for a sustained period of study in their art form or practice. Throughout the apprenticeship, the mentors and apprentices document and publicly present their work together within their communities.

For more information about the Folklife & Traditional Arts program of the N.C. Arts Council, visit https://www.ncarts.org/discover/folk-traditional-arts.

The N.C. Department of Natural and Cultural Resources (NCDNCR) is the state agency with a vision to be the leader in using the state's natural and cultural resources to build the social, cultural, educational and economic future of North Carolina. NCDNCR's mission is to improve the quality of life in our state by creating opportunities to experience excellence in the arts, history, libraries and nature in North Carolina by stimulating learning, inspiring creativity, preserving the state's history, conserving the state's natural heritage, encouraging recreation and cultural tourism, and promoting economic development.