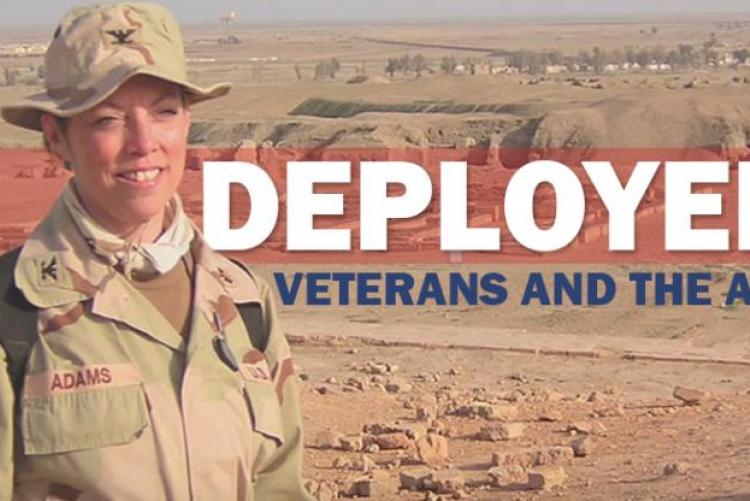 Words from veterans across North Carolina were transformed into the acclaimed theatrical production Deployed and now are the focus of a new video released by the North Carolina Arts Council. This video celebrates the service of veterans of all ages as Veterans Day is observed on Wednesday, November 11.

You can watch the video, produced for the N.C. Arts Council, an agency of the Department of Natural and Cultural Resources, on YouTube.

The video showcases the collaboration between Joseph Bathanti, past N.C. Poet Laureate, and the Touring Theatre of North Carolina that led to the creation of Deployed. The production is based on writings that veterans shared about the front lines, prison camps, training grounds and even stories about returning home and everyday life.

The Touring Theatre, a nonprofit professional theatre that produces works that focus on dignity across lines of ethnicity, gender, economic status, religion and age, gave voice to veterans and their families through skilled actors who shared the deeply moving and haunting stories that stretch over a century and a half of military conflict. Although the writings are from seven different wars, they are juxtaposed, one war against another, showing that a veteran of Iraq shares a certain kind of kinship with a veteran from World War I and how that World War I veteran touches the experiences of a veteran from Vietnam.

The four-minute video, produced by Minnow Media of Carrboro, features an interview with Col. Pam Harvey, executive director of Arts United for Davidson County, who wrote about her own deployment and that of her daughter Mary Catherine.

Bathanti is a professor of creative writing at Appalachian State University where he is also Director of Writing in the Field and Writer-in-Residence in the University's Watauga Residential College. He has taught writing workshops in prisons for more than three decades and is former chair of the N.C. Writers' Network Prison project.