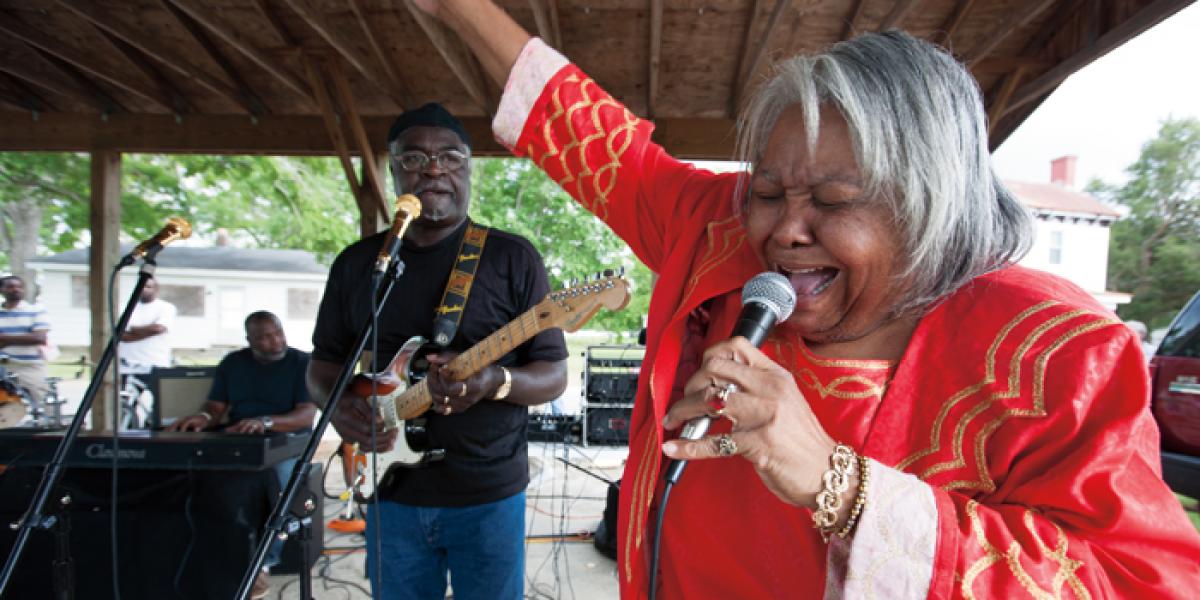 The cultural richness of East Carolina University is joined by great venues and events off-campus, in the wider Greenville area. Among the leaders in the effort to make the arts front and center in Uptown Greenville is the Pitt County Arts Council at Emerge. From its 8,000-square-foot historic building in the heart of the city, the Arts Council provides the community multiple galleries, studios for film and digital photography, pottery, and metalwork, performance space, and a sales gallery. The Arts Council’s host exhibitions and special events and a sales gallery, which carries varied and beautiful handmade treasures.

In April, the Billy Taylor Jazz Festival features performances by all of East Carolina University’s jazz ensembles, as well as visiting headline artists. The concerts, some of which are free and some ticketed, take place at on-campus and off-campus venues.

As part of ECU’s Black History Month celebrations every year, the Jazz Studies Program presents its Tribute to Motown Show, a concert of the Motown era’s hits.

Sunday in the Park Concert Series

Every Sunday in the summertime, between early June and late August, a different musical group gives a free concert at the Toyota Amphitheater at Town Common. Though each year’s lineup features a brand-new mix of music, the one constant is the annual performance by the Wilson- based Monitors, the jazz and R&B band led by the Greenville- born saxophonist Bill Myers. Oftentimes at the end of the show, members of the audience come to the front to dance the Electric Slide.

Greenville art galleries, restaurants, and shops stay open between 6 and 9 p.m. on the first Friday of every month. An Uptown Artwalk map for a self- guided tour is available.

In the springtime, the New Music@ECU Festival draws up-and-coming composers and performers, in a range of genres, from around the country and overseas. Many of East Carolina University’s own new music artists, including the ECU NewMusic Camerata and the ECU Symphony, are featured as well in the multiday lineup of concerts and competitions.

The Ledonia Wright Cultural Center opened in the fall of 1995 in its new home at the historic Bloxton House. As one of the focal points of African American and multicultural activities at the university, the Cultural Center hosted an event celebrating 50 years of desegregation at ECU in the fall of 2012. Ledonia Wright, in whose honor the center is named, joined the faculty in 1973 as an associate professor of community health. Her contributions to the ECU community included, in addition to her work as an educator, supporting multicultural student life on campus, and organizing the first African American student organization.

The process of integrating ECU began more than a decade before Dr. Wright’s arrival with the enrollment in 1962 of Laura Marie Leary (Elliot), from Vanceboro, who became ECU’s first African American graduate. Integration at ECU progressed in fits and starts through the 1960s, and by 1970, 200 African American students were enrolled in the student body of 10,000. The 1968 founding of SOULS—the Society of United Liberal Students—signaled acceleration in the improvement of conditions for black students in Greenville. In the spring of 1969, after a campus meeting, about 90 members of SOULS marched to the home of the ECU president Leo Jenkins, and presented him with a list of needed reforms. The students and Jenkins held an unscheduled meeting that night on his porch, and in the following weeks, he continued to work with SOULS to implement reforms, which included an end to playing “Dixie” at football games and to the display of Confederate flags at school-sponsored events, and the departure of faculty members accused of discrimination.

In her short tenure at ECU, Dr. Wright became a leader for the recruitment and support of minority students, and minority enrollment dramatically increased to 11 percent of the more than 13,000 students then enrolled. Following her death in 1976, the ECU African American Cultural Center was named in her honor.

The center has research and meeting facilities, and is home to rotating displays of ECU’s collection of African and African American art. Within that collection are more than 150 works by artists of the Kuba kingdom in Zaire. Gallery space at the Wright Cultural Center also features the work of current and former ECU students.

The Wellington B. Gray Gallery is the main home of ECU’s African Art Collection. The gallery houses hundreds of works of art, including textiles, sculptures, and ceremonial and functional objects. The artwork’s countries of origin include many African nations—in particular, Zaire, Upper Volta, and Côte d’Ivoire. Other special col-lections feature ceramics from North Carolina and Eastern Europe, and a group of prints by the influential early pop artist Larry Rivers.

Additionally, the Gray Gallery hosts symposia and lectures throughout the year, and six to eight traveling or student/faculty exhibitions annually.

East Carolina University’s School of Music has a busy calendar of performing arts and educational opportunities enjoyed by area residents and visitors, as well as students.

Given the region’s jazz heritage, it is fitting that the university is home to a renowned program in jazz studies and several outstanding jazz ensembles. The School of Music offers undergraduate and graduate performance degrees with concentration in jazz. The Jazz Studies Program, and other programs within the School of Music, host several special musical events every year.

The East Carolina University Jazz Ensemble, led by the director of the Jazz Studies program, Carroll Dashiell Jr., has received a host of honors and performs internationally. The ensemble has worked in partnership with the Smithsonian, Down Beat magazine, and the Duke Ellington Family Foundation, to bring to life archival scores of Ellington’s compositions. The ensemble has also performed at Birdland, Carnegie Hall, and the Montreux Jazz Festival. The School of Music also presents many classical music events throughout the year.

Places to Visit in Grifton

In the southernmost section of Pitt County, Contentnea Creek marks the border with Lenoir County, and the small town of Grifton is located on both banks. A visit to the area in mid-April may coincide with Grifton’s annual Shade Festival. This event, named in honor of one of eastern North Carolina’s favorite fish, features music, including a Sunday gospel music program. For information call 252-414-0428 or visit www.griftonshadfestival.com.

Grifton was one of the many communities in eastern North Carolina greatly altered by Hurricane Floyd in 1999. Here, Contentnea Creek, which forms the county line, roared out of its banks and destroyed many houses in the floodplain. For the people of Grifton, and for so many others across the region, Hurricane Floyd was a life-changing event never to be forgotten. Federal regulations prohibited rebuilding of homes right along Contentnea Creek, but the town was able to create something beautiful from its loss. Creekside Park, which lies on both sides of the creek, in both Pitt and Lenoir Counties, is a lovely, quiet, lush spot, ideal for picnicking, or, if you’re traveling by RV, camping. On the Lenoir side, a small dock sits over the creek, giving you a meditative place to enjoy the quiet and dip your feet in the water.

Places to Visit in Fountain

In the crossroads community of Fountain, just west of Greenville, near Farmville, is one of the region’s most distinctive music venues. The R.A. Fountain General Store occupies an early 1900s storefront in Fountain’s tiny downtown, at the intersection of NC 222 and US 258. The venue is owned and operated by Alex and Ann Albright. Alex, who teaches English at ECU, was a driving force in the project to restore and re-premiere Pitch a Boogie Woogie in the 1980s. At the Fountain General Store audiences find regular performances of blue-grass and other acoustic music, especially from eastern North Carolina, as well as occasional gospel and blues performances. The store also stocks regional books, recordings, and jams and jellies.