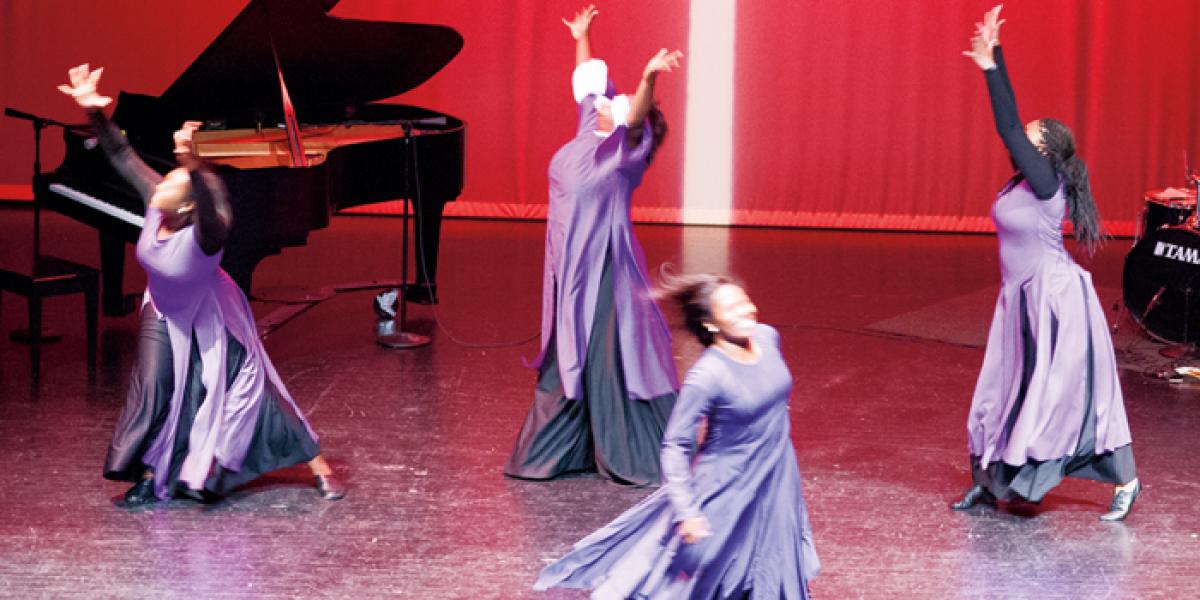 Liturgical dance at the Paramount Theater in Goldsboro. Photo by Titus Brooks Heagins.

Arts in Wayne sponsors a weekly jazz and R&B jam, a late­ night jam following the Jazz on George concert series, and the Sundays in the Park summer festival series at Herman Park. If you have an Android smartphone, you can download the Arts Council of Wayne County’s self-titled APP to learn about artistic activities in the Goldsboro area.

The 1883 building has had an interesting life, having been home at various times to a synagogue, military drill space, and, beginning in the 1920s, a vaudeville and movie theater. Today it’s a performing arts center, with a schedule that includes mu­sical performances, plays, comedy, musicals, and ballet.

The small Cherry Hospital Museum is on the campus of Cherry Hospital, which was formerly the North Carolina Asylum for the Colored Insane. The asylum opened in 1880. A highway historical marker identifies the site, which was selected in part because it was near the center of the state’s largest concentration of black residents. The hospital was integrated in 1965, and continues to operate as an inpatient facility. The museum, located in a small house on the hospital grounds (look for signs when you reach the campus), illus­trates medical treatments for the mentally ill over the last century, and gives a sense of some aspects of patients’ day ­to­day life in the hospital’s early years. The museum also displays photographs of the Cherry Hospital band.

The historical marker at the corner of George and Pine Streets re­fers to a location two tenths of a mile to the west, where the first organizational meeting of the General Association for Colored Bap­tists of North Carolina took place in October 1867. Due to the racial turbulence that characterized Reconstruction, black Bap­tists withdrew from the Baptist State Convention. The meeting took place at Goldsboro’s First African Baptist Church and was presided over by Elder Lemuel Washington Boone. Boone, a brick mason and teacher was born free in Northampton County and was a statewide religious leader who organized 20 Baptist churches in his home of Hertford County. Today, the organization—now known as the General Baptist State Convention—has more than half a million members. First African Baptist Church, which still owns the historic property, has welcomed worshipers at its current location, 803 Har­ris Street in Goldsboro, since 1978.

At the museum you will find changing exhibitions by local and national artists, rotating presentations of county history, and a read­ing room for local history and genealogy.

The Greene County Arts and Historical Society, based at the Greene County Museum in downtown Snow Hill, hosts and spon­sors a variety of cultural events throughout the year.

The Greene County Chamber of Commerce is located in down­town Snow Hill. You can stop by to pick up information on area attractions.

Jazz in the Courtyard and Greene County Performing Arts Series

The Jazz in the Courtyard concert in June happens at the Greene County Museum, with a box supper before the show. Other events in the series are hosted at local churches and venues throughout the communities. The Greene County Historical Society sponsors the Greene County Performing Arts Series, offering several con­certs each year by great jazz, classical, and gospel musicians, in­cluding artists from eastern North Carolina—such as Greene Coun­ty’s own Reverend Mal Williams and Family—and touring artists from more distant locales. The concerts take place at a variety of venues.

The sponsor of the Reunion Gospel Fest is the Greene County Training School–South Greene High National Alumni Association, an active civic organization in Snow Hill, with members and chap­ters throughout the United States. Elder members of the association are alumni of the Greene County Industrial Training School, also known as the Snow Hill Colored High School. The Alumni Associa­tion has a reunion in late May every year. Alumni gather in Snow Hill for a week of special events, including an awards ceremony, dance, worship service, picnic, and golf tournament. These take place at several locations throughout the county. Among the events each year is the Gospel Fest, which features performances by Greene County’s extraordinary gospel artists.

The school was located in the complex of educational buildings, which includes a 1950s high school building designed by the Kinston architect William Coleman, as well as the 1925 Rosenwald School, which features prominently in the county’s educational history. Rosenwald schools—buildings financed in part by the philanthropist Julius Rosenwald, in part­nership with local communities—were attended by black children throughout the South. Greene County was home to several such institutions.

Holiday parades are a favorite tradition in this part of North Caro­lina, particularly in celebration of Christmas and Martin Luther King Jr. Day. Snow Hill’s early December Christmas parade is a major event for the community. Members of many school and civic groups march or ride in floats through the downtown, and some residents drive their own cars, trucks, or golf carts in the parade. School marching bands, for which Greene County has earned national recognition, are perennially favorite attractions.