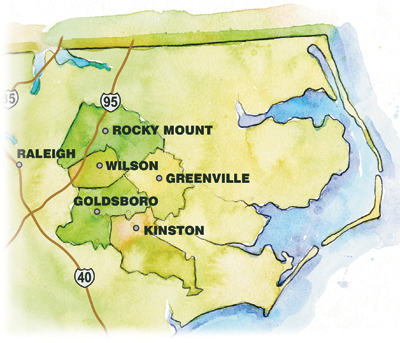 The project focuses on a cluster of eight counties including Edgecombe, Greene, Jones, Lenoir, Nash, Pitt, Wayne and Wilson that have a rich musical heritage. The jazz composer Thelonious Monk was born in Rocky Mount and jazz musician Billy Taylor, who earned an international reputation, is from Greenville.

Kinston musicians helped shape the sound that became known as funk and propelled the James Brown Band to new levels of performances and recognition. Nat Jones, Dick Knight, Levi Rashbury and the brothers Melvin and Maceo Parker were influential members of the James Brown Band.

Among the notable women artists who made Kinston home was Little Eva, whose recording of “The Loco-Motion” reached number one in the United States in 1962.

The guidebook draws on interviews with more than 90 musicians, and you’ll meet many of these prominent musicians on the website including:

Bill Myers, leader of the nationally recognized band The Monitors since 1957, is an educator; jazz, rhythm and blues saxophonist; and keyboard player. Roberta Flack was the band’s first lead vocalist.

The Barnes family from Rocky Mount became one of the most legendary gospel-singing families in America. The group included contemporary gospel star Luther Barnes and his father the late Bishop F. C. Barnes, who composed and sang the hit song “Rough Side of the Mountain.”

George Higgs, a blues musician who grew up near Tarboro, and in 1993 received a North Carolina Heritage award.

Several students of influential saxophonist Geneva Perry, who toured with the all-women big band International Sweethearts of Rhythm before she taught music at Adkin High School in Kinston.

The marching band at Greene County High School won national competitions from 1974–1981, marching in the Macy’s Thanksgiving Day parade in New York and in Florida at Disney World.

The genre known as beach music grew out of black musical traditions.

Local gospel groups would go to the radio station and sing every Sunday morning.

The General Baptist State Convention first met in Goldsboro in 1867.

Goldsboro, Snow Hill, Mount Olive, and the many smaller communities around them have an exceptionally strong heritage of gospel music. In Greene County, sacred music thrives in small churches and large extended families. Students and teachers sang gospel music during school assemblies into the 1960s.

Musical artists from the area have made names for themselves far from home. The soul singer and deep funk legend Lee Fields grew up in Greene County, but his career has taken him around the world. The gospel ensemble the Speight Sisters has made many recordings and toured widely. Other nationally known gospel artists from the area include the Anointed Jackson Sisters, and the Reverend Malkarska Williams and the Williams Family. A cousin of Lee Fields, Reverend Mal Williams performs his R & B–influenced gospel music internationally, but always comes home to Snow Hill. Others, like Reverend Howard “Slim” Hunt and the Supreme Angels, settled here because of the wealth of local musical activity.

Shirlette Ammons, a poet, musician and writer living in Durham, grew up in Mount Olive and was influenced by a rural upbringing that continues to inform her style and interpretation.

Local talent sang on radio stations broadcasting from the Goldsboro area. Popular music, from the big bands of the early 20th century to today’s hip-hop, has influenced residents of the area.

Thanks in part to Seymour Johnson Air Force Base, Goldsboro enjoys a diverse population drawn from across the United States, characterized by a diversity of musical tastes.

The hit song “I Wish I Knew How It Would Feel to Be Free,” was composed in 1952, by Greenville native Billy Taylor.

Many musicians who grew up in Greenville in the 1930s and 40s became professional musicians and music educators. The public school bands and minstrel shows that were regular events in eastern North Carolina at the time contributed to the rise of black popular music.

Local bands played in the black business district of Greenville at clubs in what was called the Block. Local musicians would come out to the area to play the guitar and blow their harmonicas.

“Turnouts” — funerals with brass music and parades, similar to the traditional New Orleans jazz funerals — were held by the Elks Lodge. The high school bands marched in parades and incorporated dance steps.

Greenville native Billy Taylor, a jazz pianist and National Medal of Arts recipient, came back home to play at East Carolina University and inspired the jazz program there.

Kinston Area: From Jazz to Funk

Little Eva, was born in Belhaven, North Carolina, and spent the last quarter-century of her life in Kinston. She worked here as a waitress at Hanzies Grill, sang in her church, and occasionally reprised her number one hit song from 1962, “The Loco-Motion.”

Zack Greene is cited by many of Kinston’s elder musicians today as an early influence.

The founding fathers of funk with the James Brown Band were from Kinston: Maceo and Melvin Parker, Nat Jones, Dick Knight and Levi Rashbury.

For at least a century, African American musicians from Kinston and the surrounding region have played key roles in the development of several forms of American music: jazz, rhythm and blues, funk, and gospel music.

Kinston in the early and mid-20th century attracted a steady stream of internationally known African American touring musicians. A tobacco town, Kinston was dotted with large tobacco warehouses, which served as music venues and dance halls, as well as centers of regional commerce.

The warehouses were frequent stops for some of the world’s most famous jazz bands in the 1930s, 40s, and 50s. Advertising Cab Calloway’s 1947 appearance, the Kinston Daily Free Press noted that it was the only stop the band would make in eastern North Carolina on its tour, an indication that Kinston had a large enough base of ticket-buying music lovers to attract performers of that caliber.

After the big-band era, Kinston’s tobacco warehouses hosted major rhythm and blues bands, including Fats Domino, Chubby Checker and Ray Charles. Kinston musicians who grew up in the 1940s and 50s speak warmly of the local musicians who came before them. They are quick to give credit to teachers, parents, and others in the community who recognized their talent and helped them learn the skills they needed to be successful artists.

Alfred Fisher, an African American resident of Pamlico County, is a retired chemist who remembers coming inland for dances at Kinston’s tobacco warehouses:

I remember one night James Brown came to Kinston. He was late. He got there about 12 o’clock. But when we left that morning, he was still there; he had quit singing, and he was playing the organ. He played the organ real well. It was 6 o’clock in the morning, and he still hadn’t quit.

I remember one night we were in Kinston. This was 1958 or ’59. They had a fence down the middle of the warehouse, you know, that was supposed to separate the white dancers and the black dancers.

Musicians working on the railroad and traveling to tobacco markets spread the blues.

Tobacco warehouses and nearby street corners were important settings for the development of blues in North Carolina. For much of its history Rocky Mount was a major tobacco market. On tobacco auction days the city bustled with visitors from all over the region.

Most residents of the neighborhood known as Around the Y had a connection to the Atlantic Coast Line Railroad Company. The railroad workers would sit in front of their shanty car homes for several hours into the evening, playing musical instruments (usually a guitar, harmonica, or banjo) singing songs (typically the blues) and telling stories about different aspects of their lives.

The June German was an all-night dance, held once a year with two or three bands playing. People from all over eastern North Carolina used to dress up and go to the June German. In the 1940s Ella Fitzgerald and Count Basie performed at the German and afterwards went to Princeville to relax.

Princeville, originally known as Freedom Hill, is the oldest town in the United States incorporated by African Americans, having grown from a community of former slaves who sought refuge near a Union Army encampment.

Across the river from Princeville, Tarboro had a thriving black business district in the mid-20th century. These businesses included theaters, where visitors would find live entertainment as well as movies. Many artists who grew up in rural areas have vivid memories of music they heard on visits to town and their own family music gatherings, including the gospel ministries that gained international renown.

Wilson Area: Singing in the Church House, Dancing in the Warehouse

The Monitors have been playing R&B for over fifty years.

Early in the 20th century, hundreds of millions of pounds of tobacco passed through Wilson every year. Farmers from across the region brought their brightleaf tobacco to Wilson’s warehouses by the truck and wagonload, where it would be purchased by buyers for cigarette factories and eventually shipped around the world.

Many of Wilson’s residents today, black and white, come from families who were drawn to the city during its commercial heyday. Still a busy, diverse community, Wilson’s musical heritage includes legacies of musical families, inspired and powerful singers and musicians in local churches, and gifted and dedicated music teachers in Wilson County public schools. It also includes the now-legendary blues players who busked outside tobacco warehouses on auction days; the big bands of the 1930s and 40s who played for dances in the warehouses; and the early stars of soul and rhythm and blues who came here on tour. Wilson’s young musicians today are a varied and highly talented generation, playing jazz, classical, gospel, hip hop, and many other kinds of music.

While tobacco warehouses, small clubs, and other venues were hosting stars of jazz and rhythm and blues, the African American churches of Wilson County developed their own singers and musicians. Gospel music has a strong following in Wilson. Gospel music’s influence on rhythm and blues has long been acknowledged, and here in Wilson, that connection is embodied in many active musicians today.