After hearing about the North Carolina Arts Council’s Blue Ridge Music Trails project, Thornton Canady, a Kinston musician and retired band director, advocated for recognition of the long and rich heritage of African American music in the area.

Staff of the North Carolina Arts Council began the process of identifying the musicians and venues important to this legacy. In addition, local arts councils organized community meetings to bring together musicians, arts supporters, educators and tourism promoters to discuss how the project should be implemented.

The pilot project began in Kinston as a partnership with the Community Council for the Arts, directed by Sandy Landis.

Final work continues on the Kinston Music Park. The beautiful and colorful landmark art piece that celebrates the African American musical heritage of Kinston, Lenoir County and the eight-county region is complete and installed. Informative interpretive signs are in place and are augmented by in-depth material on this website. The landscape is growing, solar powered lighting installed, and colorful panels have been added to the park benches. We are continuing work on the final pieces of the park including music devices and the musical Scorewalk with an expected park dedication in 2015.

The field interviews, historical documents, photographs and travel information for visitors were compiled into the guidebook. The first printing, with an accompanying CD, of 3,500 copies in September 2013 was distributed to bookstores throughout the Southeast, and the arts councils in the region. 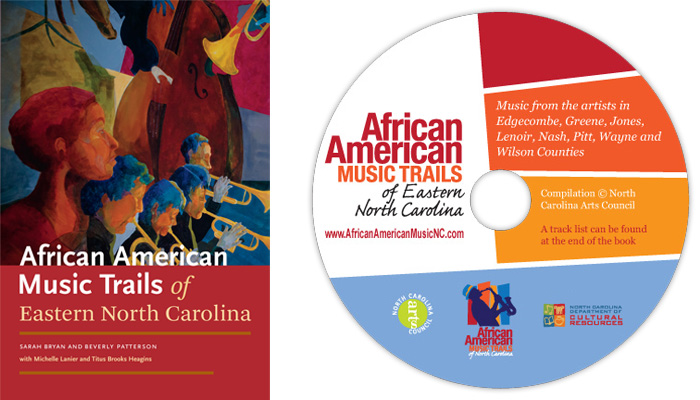 Music venues and local arts councils in the region booked musicians and are creating more performance opportunities to highlight the African American traditions. The N.C. Arts Council’s Traditional Arts Programs in the Schools (TAPS) brings local musicians together with students to learn and perform.

The following arts councils have been instrumental in the launch and ongoing support of the African American Music Trails of Eastern North Carolina project:

Community Council for the Arts