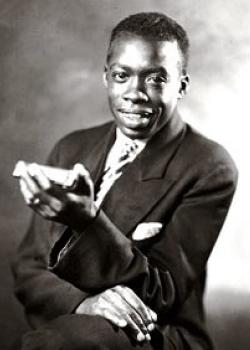 Like many rural families in the 1920s and 30s (and in later decades), African American families in eastern North Carolina often listened to the Grand Ole Opry on the radio. In an era when what was then referred to as “hillbilly music” dominated the high-power broadcasts coming from Nashville, Tennessee, African American harmonica player DeFord Bailey was a star on the Grand Ole Opry. Bailey was one of the Opry’s earliest performers and a popular recording artist, and he toured with such white country music icons as Uncle Dave Macon, Roy Acuff, and Bill Monroe. His legacy was acknowledged by the country music industry in 2005, when he was inducted posthumously into the Country Music Hall of Fame.

Bailey influenced young musicians such as the Greenville harmonica player Matthew Junior “Doc” Morris, born in 1917. In an interview with the folklorist Anne Kimzey when he was in his seventies, Morris remembered that DeFord Bailey “was from Nashville, Tennessee, that’s where he was blowing from. And I’d sit up there [by the radio] late . . . listen at it. ‘Oh brother, I’m going to get that!’”

George Higgs and his father also tuned in to hear Bailey:

We had an old battery radio. I think DeFord Bailey used to come on every Sat­urday night at nine o’clock, and me and my dad would be sitting there. He told me, “DeFord Bailey’s a good harp blower.” My father always blew the harmon­ica, ever since I remember—songs like “John Henry” and “Goose Chase.” He’d play blues. After a while, Mama’d go to fussing with him every time he’d blow the harp. “Ah, you’re playing that devil’s music!” So he finally quit it.